Connect with us
The congressional oversight panel member tells HUMAN EVENTS of the tragically ill-conceived and botched federal operation that has flooded the U.S. and Mexico with illegal firearms. 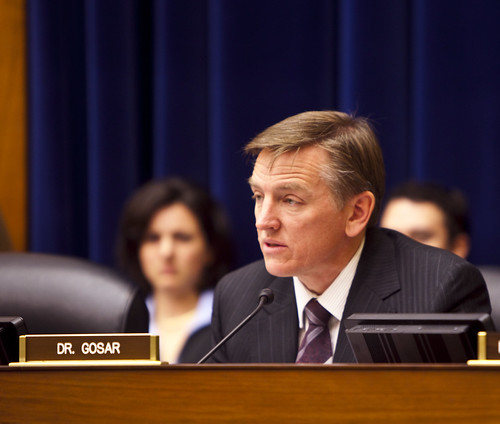 For nearly two years, Operation Fast and Furious largely took place under the radar.  And it’s arguable that it would still be unknown to the majority of Americans had not Border Patrol Agent Brian Terry been gunned down with a weapon traceable to Fast and Furious on December 14, 2010.  That death changed the complexion of everything by drawing attention to the fact that there are indeed weapons at large that the Bureau of Alcohol, Tobacco, Firearms and Explosives (ATF) allowed straw purchasers to buy and distribute among the criminal element in our society and throughout Mexico.

Following Terry’s death, questions about Fast and Furious hit critical mass, prompting Rep. Darrell Issa (R.-Calif.) to investigate the operation under the auspices of the House Committee on Oversight and Government Reform, of which he is chairman.  A number of hearings have been held before that committee, and at least two more hearings are already scheduled to take place once Congress reconvenes following summer break.

I recently spoke with Rep. Paul Gosar of Arizona’s 1st District.  He serves on the oversight committee and in that capacity is one of the congressional members taking part in investigating Fast and Furious:

HUMAN EVENTS (HE):  To begin with, what went wrong with Fast and Furious?

Gosar:  The government knowingly put forth a flawed process in Fast and Furious that placed Border Patrol agents like Brian Terry in harm’s way:  That placed every American in harm’s way, and particularly those in Arizona.  Because of the implementation of Fast and Furious, there are hundreds upon hundreds of guns that we’ll only find when they show up at a crime scene.

HE:  How, to your knowledge, were the weapons moved across the border?

Gosar:  We don’t know.  But we do know that many of the gun dealers selling the guns to the “straw purchasers” didn’t want to sell the guns.  It was flawed from the start.  [Congressman Gosar defined a straw purchaser as someone “who knowingly buys a weapon not for themselves, but to be given to a criminal, perhaps even a felon.”]

For example, one purchaser who bought over 700 guns was on food stamps and the ATF knew it.  But when gun dealers would contact the ATF to say, “This doesn’t look right” or to explain why they weren’t comfortable with a particular sale, the ATF would simply tell them the buyer was “on the list” and that the purchase was good to go.

And let me add that out of the over 2,000 guns sold, only two had tracers on them, and those ran on batteries that allowed the ATF to track them for a few hours at most.  Our government has never done this before:  We’ve never sold weapons for an operation without surveillance or tracers.

HE:  What kind of list was the ATF referencing when it told gun dealers a certain buyer was “on the list”?

Gosar: Right now, we’re trying to formulate the details of the list.

HE:  To your knowledge, how did the ATF and other agencies plan on apprehending cartel members once the weapons purchased by straw purchasers made it into agents’ hands?

Gosar:  The best-case scenario was that we’d catch a transporter.  The straw purchasers would sometimes take the guns to transporters, who would then take them across the border.  And all a transporter might get is 18 months in prison.

But there was no way to get the drug lord.  How could we?  We didn’t even tell Mexico what we were doing.  So how would we hope to get extradition of a cartel member?

HE:  Because the ATF’s William Newell admitted in congressional testimony that “the DHS, IRS, DEA, ATF, ICE and DOJ” were all involved in Fast and Furious.  And because Congressman Issa and Sen. Charles Grassley’s report says they identified “a dozen Justice Department officials who knew about the program.”  And because Kevin O’Reilly, White House officials and the national security director for North America, received updates on Fast and Furious from Newell, is there really any way President Obama could not have known about it?

HE:  In light of the fact that Attorney General Eric Holder gave a speech on Gunwalker on April 2, 2009, in which he said, “My department is committing 100 new ATF personnel to the Southwest border in the next 100 days to supplement our ongoing Project Gunrunner [aka Gunwalker],” and in which he went on to mention the contribution other agencies were making to Gunwalker, is there really any way he didn’t know about Fast and Furious until the spring of 2011 as he claims?

Gosar:  What we’re dealing with are decisions that involve an international border [U.S./Mexico] and thus should be made at the Cabinet level.  That’s common sense, and it’s a position any previous administration would confirm.  That being said, there are certain people who ought to have known about Fast and Furious from the start.

HE:  What’s your opinion of the claims that weapons were also moved into Mexico via El Paso, Tex., and Columbus, N.M.?

Gosar:  There are other activities we know of and other things we’ve heard of, but we are focusing our attention on Fast and Furious.

HE:  Amid all the denials and stonewalling by various officials, together with the fact that Fast and Furious was tragically flawed from the start, how big of a cover-up do you think we might be dealing with here?

Gosar:  We’re still inquiring.  But what we do know is that it was an operation carried out on our own people—on Americans.  We were the known collateral damage.

And it was carried out on our Mexican neighbors as well.

There were so many weapons flowing into Mexico as a result of it that Mexican authorities thought they had a civil war on their hands.

Maxine Waters Is So Very Tired

AWR Hawkins writes for Andrew Breitbart's BIG sites, for Pajamas Media, for RedCounty.com, and for Townhall.com. He was a Visiting Fellow at the Russell Kirk Center for Cultural Renewal (summer 2010), and holds a PhD in military history from Texas Tech University. You can e-mail him at awr@awrhawkins.com.