The Unseen Riots of London

For the past four days, the city of London has been in flames.  The UK Telegraph reports over 20,000 calls to the police on a single night:

Officials said all police cells in London were now full and that any new suspects who were arrested were being taken to surrounding areas.

Acting Commissioner Tim Godwin also called on all special constables to report for duty as the Met requested employers “to support” their emergency initiative.

“Last night was the worst the MPS (Metropolitan Police Service) has seen in current memory for unacceptable levels of widespread looting, fires and disorder,” a spokesman for the Met police said.

“The MPS responded with the largest policing operation of the three nights to date (approximately 2,500 officers in addition to 3,500 officers already on boroughs).”

The Met spokesman went on to report that the riots have seen violence toward both police and civilians:

“Disturbing levels of violence were directed at officers again, leading to 44 being injured last night, which included an officer being driven at, resulting in broken bones, and another officer receiving an eye injury that is likely to need surgery (separate incident).

“Fourteen members of the public were also hurt, including a man in his 60s who has life-threatening head injuries.”

The BBC says the looters who ran over a police officer with a car are being “questioned on suspicion of attempted murder.”  Another group of looters apparently shot a man to death in Croydon.  Ambulances have been attacked as they ferried the injured to overflowing hospitals.  The London police had to admit they didn’t have enough riot police to deal with the disorder.  Buildings have been set ablaze, leading to an astonishing photograph, snapped by photographer Amy Weston, of a woman leaping from the window of a blazing four-story building.

The riots spread beyond London, leading to violence in Birmingham, Liverpool, Nottingham, and Bristol.  A police station in Birmingham was set on fire.  A gang of “200 youths with masks” was roaming through Liverpool.  Residential areas and shopping centers were evacuated as the riots surged toward them.  The British government seriously considered deploying the military to restore order.  An Ealing woman told the BBC, “It looks like a war zone – I have never seen anything like it in all my life.” 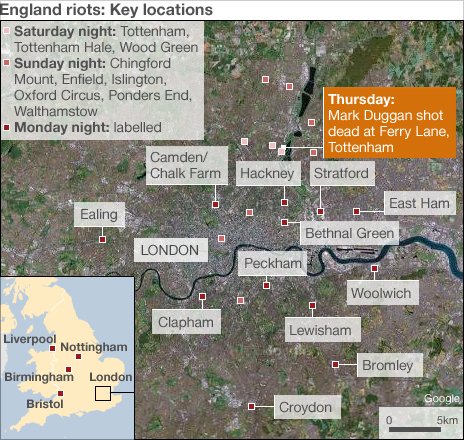 U.S. media coverage of all this has been remarkably muted.  They haven’t ignored the story, but the coverage has been superficial, and noticeably out of proportion to the scale of these horrible events.  Watching an American news report about London on TV, and then taking a look at the coverage by the BBC, presents a jarring contrast.  Of course, our weekend coverage was dominated by the U.S. government’s credit rating downgrade, and later we had the awful chopper attack in Afghanistan to deal with, but these events shouldn’t have crowded out the amazing story of a major Western capital – the storied city that gave birth to our own political system, and much of our culture – torn to shreds by gigantic hordes of rioters.

Perhaps the identity of these rioters made the U.S. media uncomfortable.  The riots began after police officers from a unit that “investigates gun crime in the black community” stopped a taxicab and shot Mark Duggan, a 29-year-old father of four.  The circumstances of the shooting were murky, and rumors quickly filled the void of official information.

Soon after the riots began, the mobs acquired a significant “Asian” (read: Muslim) population, and eventually white anarchists joined in the fun.  It may have started with a racial component, but it ended up being an impeccably multicultural disaster.

British politicians have been rushing to indict the loss of government programs through austerity measures as the true, underlying cause of the violence.  Before you groan at their opportunism, consider that they have a point… and it doesn’t reflect well on British socialism at all.

The American media might have found itself a bit squeamish about those London riots, not just because of the black and Muslim participants, but because it became a broad collapse of British society, driven by the angry dependents of a collapsing welfare state.  The dole leaves people with time on their hands, fills them with resentment over their meager circumstances, fosters despair over the lack of opportunity, and leaves them with various forms of “community organizing” as the only way to improve their lot in life.

Search the rubble left by every “austerity” program in the developed world, from Greece to London, and you’ll find burning cars and riot police.  The dependency class is enraged by what it views as broken promises, and it’s not about to turn that anger against itself, for being naïve enough to accept them.  The Tea Party movement in the United States is the only thing standing between us and a near future of powder-keg cities waiting for spark to set them off.  It’s not as if we haven’t dealt with riots here in the past… but take a long look at London today, and understand that you ain’t seen nothing yet.