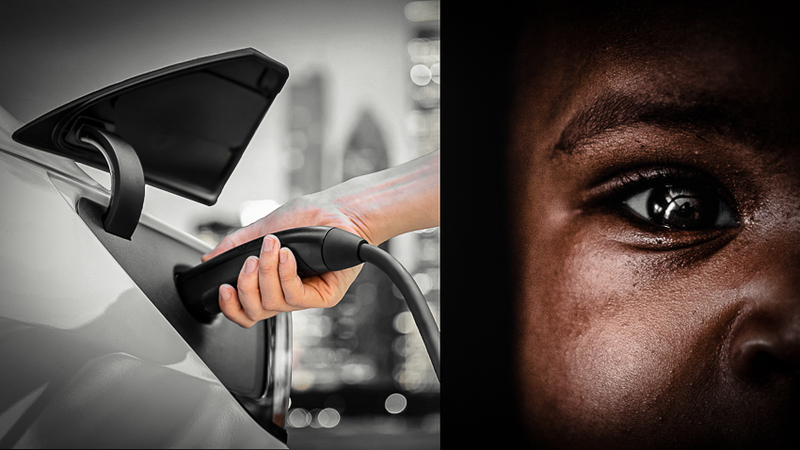 Electric
A recent study by researchers at the University of Michigan, suggests that at least 90 percent of vehicle-possessing households in the U.S. would benefit from owning an electric vehicle (EV). By trading in their gas-powered vehicles, they would see a reduction in the percentage of their income spent on “transportation energy” (in other words, the amount of gas consumed). Moreover, these households would also be helping to dramatically reduce “the amount of climate-warming greenhouse gases they generate,” according to the researchers. EVs may or may not help the environment, and they may or may not help drivers save money. But one thing is for sure, EVs come at a significant cost. The batteries powering these vehicles depend on five critical minerals: lithium, cobalt, manganese, nickel, and graphite. The vast majority of these minerals are located in countries where mining practices are highly-destructive. When and where mining occurs, the immediate environment suffers, including the residents living in the vicinity. Women and children, as this piece shows, are particularly vulnerable.

With 9.2 million tons, Chile is home to the world's largest known lithium reserves. By 2026, Chilean lithium production is set to reach 30 thousand metric tons. According to a report published last year by the National Resource Defense Council (NRDC), by cutting off access to clean water, lithium mining is having a drastic effect on the lives of the country's indigenous communities. The privatization of minerals and water, states the report, gives companies direct ownership of those valuable resources. As mining operations increase in both frequency and intensity, squeezing an already “dry region even drier, communities lose their access to potable water.” This leaves them with no option but to rely on notoriously unreliable tankers in the region to make deliveries. As the report notes, lithium can be extracted in three ways: from hard rock, a common practice in Australia; from sedimentary rock, a process that could soon become a reality in the US; and, finally, “through the evaporation of brines found beneath salt flats on South America’s Atacama Plateau.” The Chilean government and Chinese-backed mining businesses favor the latter. It is important to note that, when it comes to the extraction of lithium, China, the world leader in EV production, and Chile share an incredibly close bond. The Chinese are certainly benefiting from Chile's vast reserves; the locals, meanwhile, dehydrated and desperate, are left to suffer.

Some 6,000 miles away, in Congo, plenty of innocent people are also suffering. With 3.5 million metric tons, the Democratic Republic of the Congo has the largest cobalt reserves in the world. Mining this metal is incredibly difficult, dangerous work.
A Wilson Center report notes that of the 255,000 Congolese mining for cobalt, 40,000 are children, some as young as six years of age. Miners, often found using their hands as tools, earn as little $2 per day. Moreover, besides being paid paltry sums, they must breathe in cobalt-laden dust that can cause fatal lung ailments and increase the chances of developing spina bifida and various limb abnormalities. Again, just like in Chile, Chinese-backed businesses run many of the mining operations in Congo.

South Africa, another country with close ties to China, is the world’s largest producer of manganese. In 2021, its manganese output rose by almost 1 million metric tons (MT). Again, just like what is occurring in Chile, manganese mining drastically reduces the amount of water available to vulnerable communities. South Africa is currently in the midst of a severe water crisis. Mining also harms the quality of the water available.

An ActionAid survey found that 57% of individuals living near a manganese mine “had either no access to water at times or had to travel long distances to access water,” with 62% of respondents saying they were worried about the quality of the water available, “citing concerns about lime, saltiness, discolouration, and contamination.” The vast majority (84%) of respondents said that manganese mining is endangering their health, with 75% of those surveyed suffering from respiratory illnesses. The Action Aid team warns that women and girls are the worst affected by the activities of mining companies. As they are left with no option but to walk long distances to find clean water, often on their own and sometimes late at night, women and girls are at direct risk of being attacked and/or sexually assaulted.

In Indonesia, home to the largest nickel reserves in the world, vulnerable communities are also being harmed. As the Business & Human Rights Resource Centre previously noted, "there are several positive correlations between air pollution levels, dust fall accumulation in households, and health conditions typically found in the nickel industry. The human health impact of mining in Indonesia, they concluded, is significant. At various mining sites, local women are forced to become "contract wives," a situation where migrant workers (many of them Chinese) marry a local woman then, once their contract ends, leave her. Other women are forced into sex work.

The Balama mine, located in Cabo Delgado, the northernmost province of Mozambique, has the largest natural graphite mine in the world. Cabo Delgado is also home to another gigantic mine, the Ancuabe mine. Last year, hundreds of miners in the region went on strike. Considering their monthly wage is just 7,000 meticais ($109), it's easy to see why. Similar to what is occurring in Congo, young children can often be found slaving away in these mines, breathing in dangerous fumes.

EVs, we're constantly told, are excellent for the environment. For people with a conscience, however, they are absolutely disastrous. Yes, some will say, but why should we connect these human rights abuses to EV batteries specifically? Why aren’t you also attacking smartphones? After all, there is certainly an overlap in at least some of the battery ingredients used. Because nobody is pushing smartphones as being progressive or environmentally friendly. Everyone acknowledges that smartphones are a sort of necessary evil. But no one, at least no one of a sound mind, claims they are helping to save the planet. EVs, on the other hand, are marketed as utterly benign creations designed to help the human race. In truth, though, the batteries powering electric vehicles are the products of lots of blood, inordinate amounts of sweat, and tears of genuine pain.