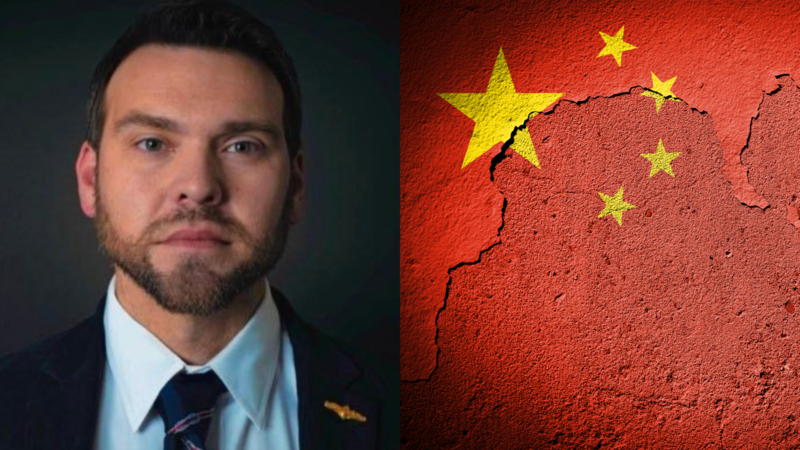 Poso China
Human Events Daily host Jack Posobiec explained the current White Paper Revolution that is overtaking Chinese cities, as thousands take to the streets to protest the murderous Chinese Communist Party. The CCP for months has locked people into their own homes in an effort to curb Covid cases, though this has proven deadly, as an apartment fire left ten dead.

"For two years I lived in Shanghai," Posobiec explained. "I lived in the Pudong district which is just north of the French concession. When I lived there, it was very interesting, because people ask me, 'What's it like living in China? Did you like it?' I never know how to answer that question. I say, 'It was interesting. I learned a lot. I learned to speak Mandarin. I learned an entirely different culture, an entirely different way of life.' Was it safe? Sure. Because it was a police state. At the same time, I also learned what it was like to live under a totalitarian dictatorship known as the CCP."

"So sure, you can go and you can go shopping, you can go watch your Hollywood movies, the ones that are allowed to be released. You can go eat food, and sure, Chinese food is great. But you can't speak out. That's the number one rule."

"That's the rule that the people of China learned on June 4, 1989, the bloody Tiananmen Square massacre," said Posobiec. "They learned that you can have personal freedom, and economic freedom perhaps, but only within the confines of the power of the CCP. Only the CCP can have political power, political freedom. "


"There are mass protests spreading throughout all of mainland China. It started this weekend... Here's what happened; while you and your family were eating your Thanksgiving dinners, all the way across the other side of the planet, across the globe, in the city of Urumqi, the Capital of Xinjiang, a building full of Uighurs and Han Chinese citizens caught fire."

"That building had been under three months of extreme lockdown measures, lockdowns that if you go back to our October 11th, show we told you about. We called them the lockdowns from hell, and we talked about the Zero Covid regime that Xi Jinping had instituted as a mark and a display of fealty to him as the new emperor because he was demanding it and...were trying to out-do each other in their displays of fealty.

"This highrise, people were welded into their homes, doors shut... There was no way for anyone to get in or anyone to get out, and the people were trapped like this for months. We talked about how it started in Shangai, but it moved to every city across the country," Posobiec continued.

"Well, then what happened? While you were eating Thanksgiving dinner, a fire broke out in this highrise on the 15th floor. If anyone who has ever lived in a highrise in any city in the world knows, a fire breaking out on a high floor is one of the most dangerous and deadly things that can happen.

"Here's what happened to those people: they were locked inside their homes by their own government, they were forced inside, they were stuck inside, and their loved ones were forced to listen while these people, Han Chinese and Uighurs, burned alive at the order of the Chinese Communist Party.

"This was a massacre. This was the Xinjiang massacre."

"There's another thing they're saying: Take down the CCP. They're chanting it in Mandarin. The first place I saw this was in Shangai, but it's going on across the country, even in Beijing, just a couple of miles from Tiananmen Square. Trust me, the people of China understand what that means, a protest in Tiananmen Square."

"They're also saying another phrase: 'Arise those who refuse to be slaves.' Believe it or not, that's the first line of the Chinese national anthem."

"See, the problem with running a revolutionary regime with revolutionary rhetoric is that eventually that rhetoric can be turned against you, and that's what we're seeing happen right now across every single major city across China."

"The people of China are proxies for the American people and every single freedom-loving human being on this planet," Posobiec explained.
China, Jack Posobiec
Poso China