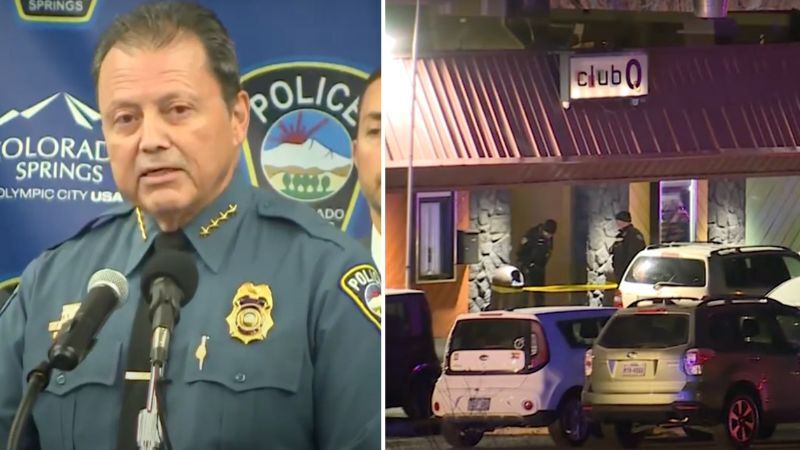 On November 20th, a lone gunman entered a nightclub in Colorado with a long rifle and started shooting. There were 5 confirmed deaths at Club Q in Colorado Springs and over a dozen reported injuries. Thanks to the bravery of a few bar patrons, the gunman was tackled to the floor, an act that likely saved more lives. When a tragedy like this occurs, we are left with many questions. What kind of person would do such a thing? Why would they come into a club specifically aimed at LGBTQ people?

In 2015, the U.S. Supreme Court struck down all state bans on same-sex marriage, legalized it in all fifty states, and required states to honor out-of-state same-sex marriage licenses, a huge win for our community. Legally, all citizens of the United States of America have a right to pursue life, liberty and happiness within reason, and without hurting others. The Colorado Springs Police Chief Vasquez emphasized this himself when he said: “Every citizen has a right to feel safe and secure in our city, to go about our beautiful city without fear of being harmed or treated poorly.”

Unfortunately, there are still unstable individuals who take their pain out on those they disagree with. This is likely why the horror at Club Q is being treated as a hate crime, leaving many of us to ask how something like this could happen considering (or perhaps because of) the progress the gay community has already made. The mainstream media is, yet again, harnessing the tragedy in another empty call for more gun control, while simultaneously inspiring people like Keith Edwards to point fingers at conservative news, Republicans, and LibsofTiktok for exposing extremist behavior within the community.

What people like Keith fail to realize is that the gay community is not a monolith, and not all gay people have to agree with what’s best for the community. In addition, there are gay members of the Republican party, meaning not all Republicans are against gay rights. The blame lies largely with the radicalized members of the LGBTQ+ community, who have pushed beyond common-sense boundaries and into an invasive space that often courts the idea of normalizing the sexualization of children. If you disagree with these radicals as Gays Against Groomers has, you are slapped with nasty labels and your concern is considered hateful.

At the very least, groups like the San Francisco gay men’s choir have taken pleasure in taunting those who dare question the intentions of the LGBTQ community. Their lyrics “we’re coming for your children” was a blatant mockery of concerned parents. The LGBTQ community has been guilty of brushing off parental concerns in the past, but if we truly want respect we must in turn respect those that are different from us, instead of attempting to “convert” them OR their children. This means respecting boundaries and what’s appropriate for developing children.


Other dangerous behavior we don’t approve of within the LGBTQ community has included:
-Schools and teachers encouraging children to keep secrets from their parents
-Schools providing pornographic books depicting gay sex acts
-Parents taking young children to watch overly sexual half naked drag queens
-A child being taught how to dance on a stripper pole at a Pride parade
-Trans activists giving hormone treatment to minors without parental or doctor consent

Our community needs to hold itself accountable. Instead of progress, this extreme behavior has set the gay community back into a space where our existence and rights are yet again under scrutiny. Academics seem to have shifted their focus from teaching valuable skills to exposing kids to an overwhelming and confusing amount of adult material related to sexuality. Instead of letting some children grow up and decide for themselves, many are feeling pressured to not only join the LGBTQ community, but change their bodies before fully developing and discovering themselves.

It’s as if it wasn’t enough to have the right to marry who we love. The radicals who have hijacked our community have pushed for representation and acceptance in every space you can imagine, even pushing out traditional gays in favor of “non-binary queer folk.” To these extremists, the stranger the better. Every mainstream company you can think of now signals their allegiance to the gay community every June, and even now at the World Cup the US is using a rainbow logo to flaunt their allegiance, despite the fact that same-sex relationships are illegal in host nation Qatar.

This kind of disrespect is eroding our community. “Accept us or else” seems to be the Alphabet Mafia’s new slogan. How is this love, and not authoritarian collectivism? As gays, if we want respect we have to respect others’ feelings about us, too. We do not need the whole world to love and accept us, and if we do, it is an indication that we don’t love and accept ourselves first. The validation the radical LGBTQIA+ community seeks, particularly from underage children, is a dangerous symptom of their own internal struggle, and they’ve chosen to make that struggle everyone’s problem.

That’s why places like Club Q could be targeted more and more. The more radicals push and invade spaces they have no business invading (and wouldn’t, if they were comfortable with themselves) the angrier it will make extremists on the opposite side of the spectrum. This encourages the divisive media rhetoric pushing civil war, yet again. The modern LGBTQIA+ movement is ruining it for those of us in the gay community who have no interest in participating in gaudy parades or talking to young children about sexuality. Because of them, there may not be safe spaces for any gay people in the future.

A line has been crossed, and a target is now on the backs of everyone under the LGBTQ umbrella, not just the radicals. While there will always be hate in the world, our community must address the problems within before we go pointing fingers. We need our boundaries back, or more tragedies like Club Q are likely in our future. This is why Gays Against Groomers exists. We are here to call out the radicals within our community and salvage what’s left of our dignity. And we’re just getting started.

Note from the author:

Let me be clear: What happened at Club Q in Colorado was a tragedy and should not have happened. It is no one’s fault but the shooter. My concern is the rhetoric being used by media to shield radical extremists within the gay community and push unnecessary gun control.

Furthermore, I see this story being weaponized by both sides of the political aisle. Everyone is pointing fingers, though extremists exist on both sides. But if we don’t hold ourselves accountable first, who are we to assign blame?

Our society is sick. So many are mentally unwell, and afraid of the future. While normally the first questions I would be asking are about the shooter and his background, I know enough about the media to question how this story is being told. Including how people react to it.

No one deserves to die for how they live their life, unless it hurts others. But those who have let their minds turn into weapons for the system are a huge part of our problem. We need to acknowledge that.