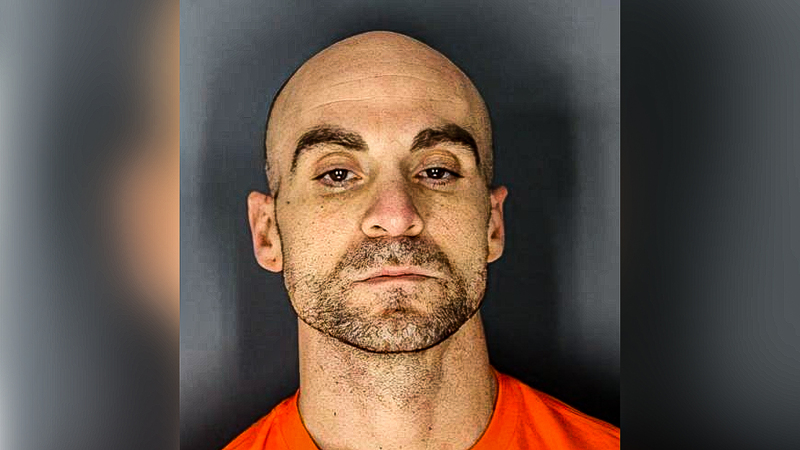 mugshot
This article was originally published at The Post Millennial, a part of the Human Events Media Group.
*****
A judge sentenced Alexander Contompasis, an admitted Antifa member, to 20 years in state prison on Thursday for stabbing two members of the Proud Boys during a brawl between Antifa and pro-Trump "Stop the Steal" protesters outside the state Capitol in Albany, NY in January of 2021.

Assistant District Attorney Bryanne Perlanski said that though the victims also engaged in physical violence at the Capitol, they did not bring a knife and told the judge that Contompasis went to the Capitol with "violence in his mind and in his heart."

According to the Times Union, Supreme Court Justice Roger McDonough told the 39-year-old Contompasis during sentencing that "toxicity in the body politic" fueled his stabbing of two members of the Proud Boys, adding that he could only conclude that the defendant went to the Capitol "ready, willing, and able" to inflict violence on political opponents.

McDonough said, "That's exactly what the defendant did. He violently, brutally stabbed political opponents of his -- one of whom he eviscerated. This wasn't just a simple stab or an accidental stab or a 'poke' as the defendant attempted to describe it in his testimony. These were violent knife attacks.”

The judge rejected Contompasis' claims that he had gone to the Capitol as an independent journalist to document the rally stating, "Independent journalists don't carry knives. This defendant did," adding that he believed the defendant showed no remorse for injuries that could have led to murder.

At the time of the brawl, Contompasis was interviewed by CNN and identified as an "Antifa protester from Albany." Contompasis has a long history of militant far-left activism and involvement in Antifa despite identifying as a journalist. In one of many photos uploaded on his Facebook profile under the pseudonym "Alex Stokes," he is holding a rifle with a large hunting knife strapped to his side. Text over the photo read, "I am Antifa." Contompasis makes references to being a "SHARP" member — Skinheads Against Racial Prejudice — in his posts. The SHARP group is used as fighters and brawlers in the Antifa riots.

In one Facebook post, Contompasis identified as an Antifa member writing, "10 years ago if you told me I was going to be part of an underground Anarchist network of masked avengers called Antifa, work with Skinheads to fight white supremacists, have the honor of providing security for events organized by the Black Liberation Movement then catch a virus responsible for shutting down the state during a global pandemic I would have absolutely no idea what the f*ck you were talking about."

Contompasis had previously admitted that he works with skinheads to "fight white supremacists," and provides security for events organized by the Black Power movement. Additionally, he has an extensive arrest history related to political violence.

He was arrested at President Donald Trump’s inauguration in 2017 and charged with felony riot for setting a limousine on fire. Later that year, he went to Charlottesville, Va. to violently protest against the far-right and was photographed punching an older man in the back of the head.

Jurors convicted Contompasis after deliberating for only three hours on Oct. 7 after watching a video of the attack.

Before imposing the sentence, the judge said, "There are loud and strident fringes on both sides of the political spectrum who believe that anyone who holds opinions different from their own are not only wrong but that they're evil and that they must be silenced and driven from the public square, that they can't be heard."

One of the victims said he hoped Contompasis' sentencing would include community service at Republican campaigns and conservative organizations "so that dialogue and communication can be open and creative."
mugshot