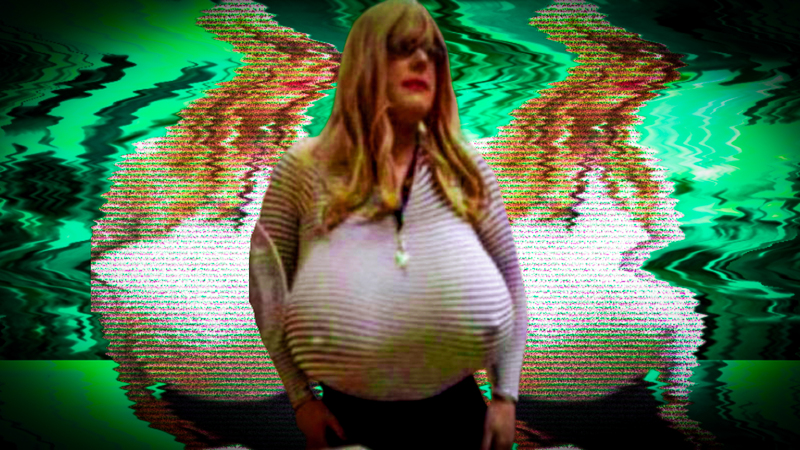 After a biologically male shop teacher began teaching class while wearing a blonde wig, tight bicycle shorts, and most notably obscenely large prosthetic breasts with protruding nippes, the local school board decided that, despite backlash, this attire would be permitted.

“It is important to recognize the impact that dress code policies can have on members of the transgender community,” said the report from the Halton District School Board (HDSB). “Most notably, it is important for employers to make allowances to ensure that these employees are able to express themselves in accordance with their lived gender.”

HDSB's review of its dress code further concluded that imposing rules to prevent a male teacher from wearing obscenely large prosthetic breasts with protruding nipples to work would result in “considerable liability.”

Curtis Ennis, director of education at HDSB, had requested a report addressing various considerations of the board’s dress code in September, after the Oakville Trafalgar High School became the focus of international attention. Photographs and video starting circulating on social media of an obviously male teacher wearing a blonde wig and massive prosthetic breasts while teaching a shop class.

At the time, the school and the board stood by the teacher’s right to dress in such an inappropriate way, ignoring the parents and students who protested outside the school demanding that the teacher be forced to leave the fetishwear at home.

“If an employer’s dress code and grooming standards place more difficult requirements on female employees relative to those placed on male employees, or require female employees to dress in a manner with is more conventional, such standards could form the basis of a discrimination claim under the Code,” continues the report.

Ironically, the Ontario Human Rights Code policy on sexualized and gender-specific dress codes was written to protect women from being forced to dress in a sexualized way by employers. According to the policy, forcing women to wear high heels, tight clothing or low-cut tops reinforces “stereotypical and sexist notions about how women should look and may violate Ontario’s Human Rights Code.” Now that same policy is being used to protect a male’s right to identify as female and dress as a sexist caricature of woman while teaching children.

“It is clear from the above analysis that the implementation of a formal staff dress code or grooming standards would likely expose the Board to considerable liability,” said the report in conclusion. “Even if a dress code is implemented for non-discriminatory reasons, it would likely be found to be discriminatory where it adversely affects an employee or group of employers on the basis of their Code-protected rights.”

In other words, if a male’s gender identity is female and the expression of that gender identity involves wearing pornographic fetish gear in a classroom full of children, the Ontario Human Rights Code protects that individual’s right to do so and the school is powerless to protect the children in their care from such inappropriate behavior.

Back in September, Ontario Education Minister Stephen Lecce requested that the Ontario College of Teachers review and “consider strengthening” provisions regarding professional conduct “in the interest of all kids in Ontario.” The results of this review are still pending.