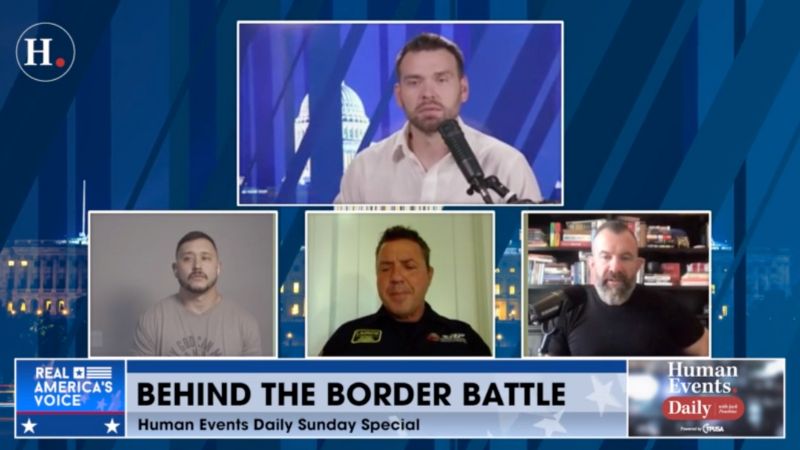 On a Sunday Special episode of Human Events Daily, host Jack Posobiec spoke with Marcus Wada, the director of Turning Point USA's six-part docuseries "Border Battle: Detailing the 'War' Raging on America's Southern Border" along with two contributors to the series, Bryce Eddy, host of Liberty Station podcast, and Steve Slepcevic, CEO of Strategic Response Partners, about the horrors happening at the border and confronting the paramilitary capabilities of the cartels.

The series, "which chronicles the horrifying conditions on America’s Southern Border and the consequences of decades of Government neglect" puts the American people directly on the "frontlines of the crisis" caused by Biden as he dramatically loosened restrictions along the southern border.  In 2021 a record number of 1,659,206 illegal immigrants crossed the southern border and 2,378,944 encounters in the 2022 fiscal year.

One of the most significant consequences of Biden's catastrophic border policies has been the empowering and emboldening of the Mexican cartels who are trafficking humans and drugs across the border in record numbers. The three men addressed the reality that many of the illegal immigrants pouring into the United States month after month are not seeking a better life but paramilitary agents working for the cartels.

Posobiec noted how when some of these aliens are confronted by the possibility of apprehension they experience "shock of capture," a military term used to describe that fight-or-flight moment.

Slepcevic explained how, using drones, "You're able to see the detail of whether they're carrying the weapon on them, how their clothes are moving. A lot of Intel's being done about how they're moving weapons."

"What kind of weapons do you see down there," Posobiec asked.

"Let me let me answer that," Eddy said, "because they are well outfitted Jack. I mean, they were not just you know, having pistols and rifles they were having the best pistols and rifles. These guys in some cases, they had AK-47s, you saw a lot of AR-15s, we're talking full kits."

"I mean, this is a parallel military there in terms of the cartel, the people that are crossing over the border that are being trafficked, or paying the cartel to get across or coming, you know, with their gear, backpacks, all that, you know, walking across," Eddy said, adding, "it was amazing to witness the sheer scale of the operation that they have going on."

"I don't think people realize that," Posobiec remarked, adding that the establishment media narrative is, "oh, these are just people who are searching for a better life. They're just looking for economic, you know, some better situations for themselves or their families."

"We're not hearing stories about people coming across with plate carriers and AR-15s and AK-47s unless it's, you know, the 'Fast and Furious' scandal and then they don't even talk about it for 10 years," Posobiec added.

Forbes called the 'Fast and Furious' scandal "Obama's Watergate" and involved the Obama administration sending roughly 2000 weapons directly into the hands of the cartels.

Wada then said that there are families crossing the border too, but "the biggest issue is that criminals like part of this paramilitary group with these cartels" have "automatic machine guns" and "full size tanks that they have at their disposal."

"They are literally as strong if not stronger than the Marines in Mexico. These people are absolutely terrorists," Wada added.

The full series, Border Battle, can be viewed at the streaming site SalemNow.com.