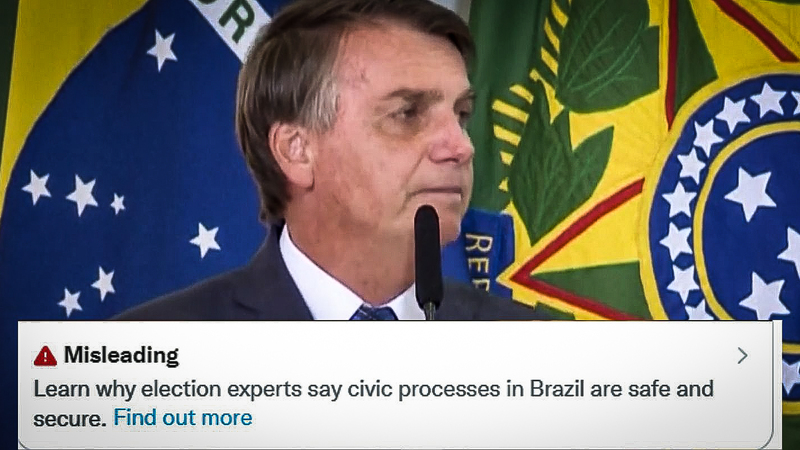 bolso twitter by Roberto Cruz
Twitter has begun flagging posts that claim that the election was stolen from Brazilian President Jair Bolsonaro with tags that they are "misleading." Video showing police joining in on truck driver blockade protests now have a label that read, "learn why election experts say civic processes in Brazil are safe and secure."

When one clicks "Learn more," Twitter tells users, in Portuguese "the Superior Electoral Court (TSE) and the Regional Electoral Courts (TREs) have established a series of audit parameters and processes to ensure the security and integrity of elections. The Electoral Justice carries out periodic security tests of electronic voting machines, in addition to providing voting reports to polling station officials and inspectors from political parties, the Armed Forces, the Brazilian Bar Association (OAB) and the Public Ministry. In addition, voters can access the ballot box. The TSE also established a Transparency Commission to develop new best practices in electoral transparency."

On Tuesday, Brazilian President Jair Bolsonaro addressed the public for the first time since his election loss on Sunday after speculation that he would not concede to Lula da Silva, who won by less than two percent of the vote.

While Bolsonaro did not concede and did not say that Lula was the victor in the contest, he did say that he would obey the constitution of Brazil. Bolsonaro's chief of staff also said that Lula da Silva would become president as would normally happen.

Bolsonaro's lack of an immediate response to the election results inspired trucker blockades across the country of 214 million, moreso in the Bolsonaro-supporting south. Reportedly, some of those who blocked the streets called for a military coup to prevent Lula from becoming president.

Bloomberg reports that blocked roads have threatened to "upend the country's massive agriculture industry," with protestors blocking shipment of grain, meat, and fertilizer around the country

While disruption to feed distribution "put chicken and pork production at risk, according to people familiar with the matter, who asked not to be named for safety reasons. The Paranagua port authority said in a note early Tuesday that the main road giving access to the port was blocked, delaying truck deliveries to one of Brazil’s main export sites," Bloomberg reports.

Police were ordered to begin breaking up demonstrations by Bolsonaro supporters. The Supreme Court ruled on Tuesday that the federal highway police must "immediately take all measures" to clear "illicitly obstructed roads." The Guardian reports that "Videos showed law enforcement officers removing demonstrators sitting in the middle of the highway by spraying them with pepper gas. In other locations police peacefully convinced protesters to go home."

In the capital city, Brasilia, police shut down traffic access to central government buildings and the esplanade after supposed tips that supporters were planning to occupy the square in from of the Supreme Court, which many believe acted in favor of Lula after it annulled his criminal convictions. That same Supreme Court blocked Lula from running in 2018, however.

Bolsonaro won 49.17 percent of the vote compared to 50.83 by da Silva. Da Silva, a former president himself, was convicted in 2017 for money laundering in a major operation that saw many South American politicians and executives arrested.
bolso twitter by Roberto Cruz