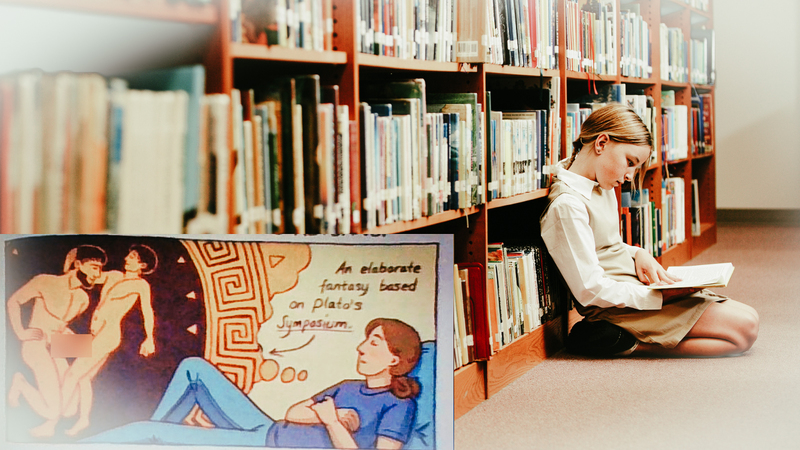 “Have you at least touched his d*ck yet?” Tessa said.

“Oh my God, Wren. That poor guy must have the worst case of blue balls ever.”

That pithy exchange comes – no pun intended – from Lauren Myracle’s young adult novel The Infinite Moment of Us, which gave me the worst case of second-hand embarrassment. Five school districts in Indiana, Georgia, and Florida have attempted to ban the 2013 novel, according to PEN America’s Index of School Book Bans.

PEN America has documented 2,535 individual challenges that school districts have made to books between July 1, 2021, and June 30, 2022. Often these books contain sexually explicit content that educators would otherwise oppose in school plays or movie viewings. However, many of these books document their LGBTQ authors’ queer or transgender experiences.

But these books are not innocent stories of marginalized voices, as the left tries to argue in tandem with the mainstream media, framing the parents and administrators opposed to the texts as fascist book banners who want to silence minorities. They testify to the far-left’s sexualization of education as an act of ‘resistance’ against cultural norms and social institutions including the nuclear family and religion, which progressives increasingly associate with right-wing politics.

The left’s reductionist narratives about Christian nationalism and White supremacy do not work, however, when the vocal parents are Muslim Americans. In October, these Dearborn, Michigan, parents voiced their objections at school board meetings to This Book is Gay, which bills itself as an “instruction manual” that teaches young people “how to flirt,” among other things.

There is no mistaking the chapter for a how-to manual. It does not talk about health but rather encourages readers to “experiment” and discover their “go-to ritual” with nine anonymous anecdotes for inspiration. One contribution reads in-part:

Sometimes these rituals involve sexting, for which Witton provides a reminder regarding its illegality in the case of minors and nonconsensual distribution. But Witton, who is a “big fan of sexting,” also includes a seven-page brief by British criminal lawyer Kate Parker.

Letting minors read sexually explicit material is one thing, but giving them legal advice without parental consent and then expecting them to act accordingly based on those recommendations crosses a line. The sexualization of K-12 education extends beyond some educators’ attempts to groom future queers and allies; it assaults parental rights and freedoms in an attempt to undo – to queer – traditional social norms and conventions.

School boards face parental outrage because their activist policies are not representative of where most moderate, moral, and reasonably religious Americans are with exposing children to sexual content, no matter the orientation. By enabling the far-left LGBTQ agenda within schools and disempowering parents, boards are not acting as representative members of their respective communities. Rather, they are agents of the far-left’s illiberal pursuit to social engineer society.

To that end, sexual activity is the new vanguard for today’s far left. Sexualization is the key to catalyzing social justice in leftists’ imaginary of perfected societies.  And it is for that reason that the most graphic content in PEN America’s list about transgender youth.

Gender Queer, by Maia Kobabe, is a 2020 graphic novel about a girl who grows up to be nonbinary and asexual. The book has faced 42 challenges coast-to-coast and intense opposition largely due to its visual depiction of oral sex. 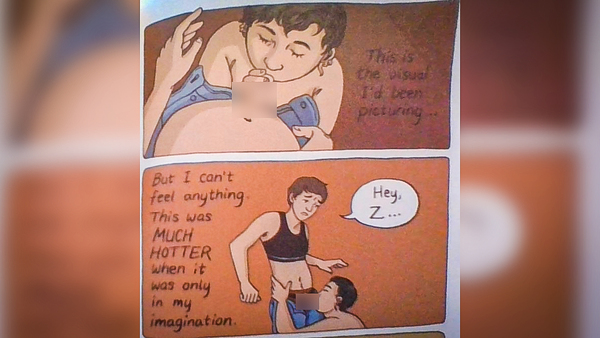 If Gender Queer were about a heterosexual couple and featured the same illustrations with a boy and girl without the equipment, the outrage would transcend political divides. There is a thread of liberal paternalism among white liberals – the same people who condemned the Muslim parents in Dearborn – that sees minorities as in the need of help from the dominant social group. This outlook explains why White American liberals do not criticize Arab and African countries for human rights abuses against women and homosexuals with the same ferocity they condemn other White Americans for purportedly threatening both groups. Liberals expect more from the dominant culture because minorities are less capable of understanding which values are best.

Consequently, the same class of liberal that sympathizes more with leftists over the Muslim parents do not see the events in Gender Queer as about real people or situations. The characters remain characters to them because the self-actualized queer or transgender individual remains the prophetic figure of liberation to the new woke religion. Despite the supportive rhetoric, mainstream liberal Americans still perceive Gender Queer as fictitious, so they do not challenge the pornography in classrooms. 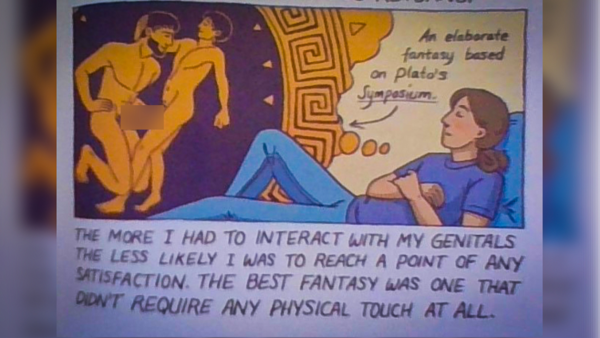 In this context, every qualifier about anachronistic norms goes out the window because the subject matter serves as a fantasy about pedophilia. Yet, the media decries attempts to keep Gender Queer out of schools. This particular fantasy is protected by its fictious status in a fictious work. Its second-degree removal from reality keeps the liberal parents at bay.

Gender Queer is wholly inappropriate for school-aged children. It should not be in libraries, but that does not mean it should not be published. Yet, any suggestion of the book’s unsuitability is met with accusations of reactionary right-wing politics from the left.

School children do not need pornographic material to understand homosexuality, queerness, and transgender identities. They are not hard concepts to understand. But the more the left makes everything about sexual identity, the more sexual activity defines sexual identity. Therefore, this is nothing but sex acts for people who view sexuality as the totality of existence.

For that reason, progressives and leftists portray any attempt at discretion in school libraries as a threat to society as a whole. Keeping these books out of schools is a matter of taste and decency. It is a matter of choice.

“We’re each busting a load into this bottle. If you don’t c*m, you have to DRINK IT! Hahahaha!” the novel reads. It’s a Mountain Dew bottle, if you are wondering. At this point in the story, the protagonist had already been invited to “[h]ave fun suckin’ each other’s d*cks,” to which he replies, “F*ck you, pencil d*ck.”

Portraying homophobia is not inappropriate in young adult literature when it helps gay teens cope with their difference. But depictions of homophobia do not need inappropriate language or visuals. Keeping books with sexually vulgar language and renderings of naked minors in school libraries at best speaks to a matter of taste. At worst, it begs the question whether queerness can be anything other than licentious.

School-aged children that do not read these books are not missing a thing. The novels are more about the authors’ personal and political agendas than they are about their intended audiences.

Educators that want young children to handle difficult topics through creative works should consult the PBS series Wishbone. That show introduced great literature to children in a way that shielded them from death, rape, and sexual content without losing the essence of the stories. Children can understand the characters’ dynamics and morals in Wishbone without being exposed to explicit content at an inappropriate age.

When queer people slap a few swear words together with drawings of underage nudity, they are not being brave. They are being lazy and grotesque. They are proving that the queer and transgender movements have nothing to offer this country but their immoralities.