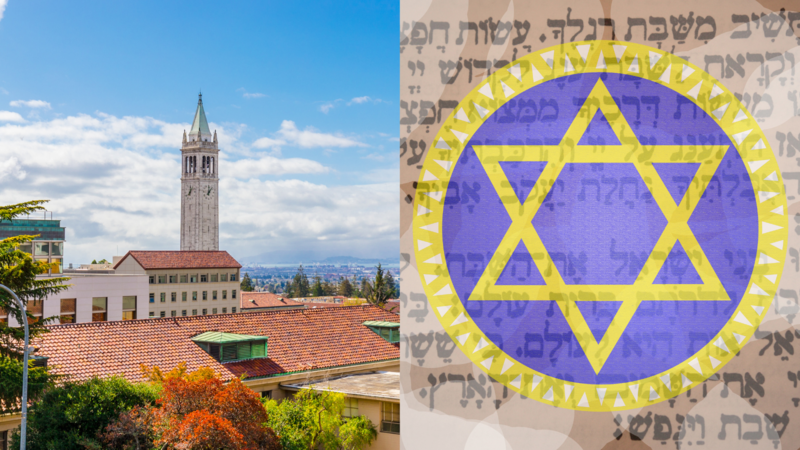 The University of California Berkeley School of Law recently came under fire after an opinion piece in the Jewish Journal revealed that nine student groups had adopted a bylaw, resolving to “not invite speakers that have expressed interest and continue to hold views, host, sponsor or promote events in support of Zionism, the apartheid state of Israel and the occupation of Palestine.”

Critics noted that the adoption of such a policy effectively created ‘Jewish Free Zones’ on campus.

Jewish advocate Justine Murray is no stranger to anti-Semitism on campus. During her time at Syracuse University, she made headlines multiple times, not only for repeatedly exposing anti-Semitic bias on campus, but also for daring to form a student group honoring the constitution. (The school said that the document was "exclusionary" to certain groups.)

Now, she says the situation at Berkeley Law is a 'giant goose-step' toward the normalization of actual anti-Semitic policies.

"UC Berkely student groups banning Jewish voices is a giant goose-step into the same direction as the antisemitism witnessed in Germany in the early 1930s," Murray told Human Events.

"Ironically, these students simultaneously use words such as anti-racism, social justice and equity, and inclusion — all words that belie the truth of their sanctimony," she added.

"Consider that no antisemitic group has yet to be on the right side of history, and no group knew they were wrong while doing so. Let the blindness of the new American antisemitism give every student, teacher, and parent pause... we are learning, teaching, and living among a new leftist antisemitism."

Murray is not the only one sounding the alarm on the implications of the policy.

‘Given that the vast majority of Jews worldwide support the state of Israel, these student groups have in essence created a Jew-free zone in the hallowed halls of Berkeley Law.,” wrote Laura Rosen Cohen for Newsweek.

“Banning Jews, or members of any other religious group, from participating in a civil activity such as speaking at a publicly funded university is discriminatory and immoral,” Cohen continued. “And if it becomes acceptable and normalized in America to ban a Jew from speaking on a college campus because of an opinion held about Israel or Zionism, what is to stop the next step from happening, i.e the normalization of banning Jews from attending that same or other institutions of higher education or other entities?”

Ironically this exclusion would bar Berkeley Law Dean Erwin Chemerinsky, a self-identified progressive Zionist, from speaking at events hosted by these student groups.

Chemerinsky responded to the piece by Kenneth Marcus, saying that while he finds the rule to be both anti-Semitic and “inconsistent” with the school’s “commitment to free speech,” the law student groups in question “have free speech rights, including to express messages that I and others might find offensive.”

Director of Berkeley’s Hillel Jewish Student Center Adam Naftalin-Kelman told Campus Reform that he was “troubled” by the fact that the Stidents for Justice of Palestine group asked other student groups to sign on to the agreement.

“While they have the first amendment right to make this request of other student groups, it has a chilling effect on Jewish students’ acceptance and full inclusion of their whole selves into the campus community,” said Naftalin-Kelman.