POSOBIEC: Philly Gangs Have Turned the Birthplace of Our Nation Into an 'Absolute Cesspool' 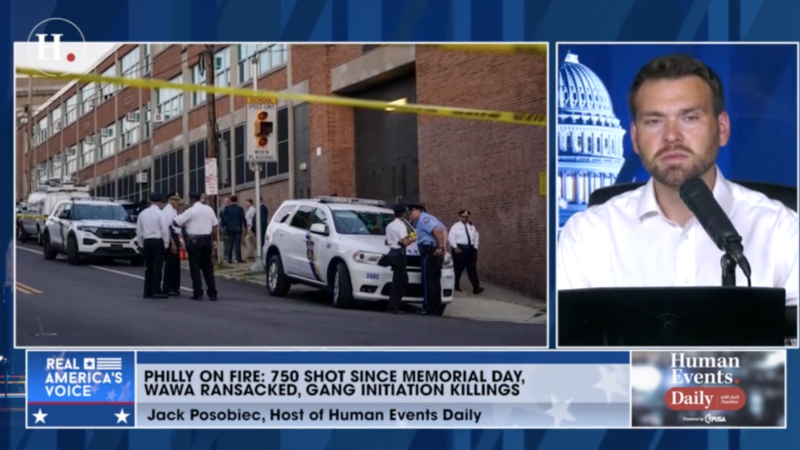 Phill Gangs
Human Events Daily host Jack Posobiec slammed the leaders of Pennsylvania and specifically of Philadelphia, as crime in the city of brotherly love continues to skyrocket while elected officials continue to deflect blame and deny the issue altogether.

"The home and the birthplace of our nation and liberty. It's turned into an absolute cesspool," said Posobiec. "Philadelphia has become a cesspool under its current leadership, of the state and the city, they don't care that these things are going on. They tell you they do, they say, 'we're so sorry it's happening. We wish it wasn't happening, but there's nothing we can do.'"

Posobiec then informed viewers of a shocking statistic: "750 people have been shot in Philadelphia in four months since Memorial Day. It's been 121 days, 750 people shot. Seven a day," he said, then referring to a viral video showing a Wawa convenience store that was looted by dozens of young people. "The Wawa? You saw those crazy videos coming out of there. That's in the Mayfair section of Philadelphia, which used to be a good section of Philadelphia where you could raise families. Not anymore, gone."

"When I was a kid, I had friends in Mayfair, we'd go there. Normal. Now you can't even go to a Wawa there because they're tearing up the place and the only thing the girl in front seemed to say on that video is 'are you done making my sandwich yet' while they're tossing racks of tasty cakes and Slim Jims, smashing the entire store, dancing on the countertops, as if this is normal, as if this is the normal way to conduct business in a first world nation," said Posobiec.

"This isn't first-world nation behavior and it certainly isn't first-world nation leadership that we have in Pennsylvania and in the city of Philadelphia," said Posobiec. "What else is going on? When I say gang initiations, this has been a massive issue, and of course, the Philadelphia leadership refuses to talk about it. Well guess what, I talk to people in Philadelphia every single day, they're called my family members. They know what's going on, everybody knows what's going on in Philly."

"So there was a teenage victim, five people were shot at a high school football scrimmage yesterday in Roxborough. Roxborough used to be a nice area, even when I was in high school. Now, you can't go to Roxborough, no," said Posobiec.

In the north Philadelphia neighborhood, police said the students had been walking along Pechin Street when they were "ambushed" by several gunmen.

In total, over seventy rounds were fired... Police say a possible motive has not been found, but that authorities are combing through social media and surveillance footage to see if one can be established.

"A high school football team was shot up after a football scrimmage outside of Roxborough high school, one killed five shot total. There were five shooters who waited outside. Five shooters who waited outside this football game and waited for it to end. Because they were targeting one of the players. That's a gang initiation, that's exactly what that is, and if you don't understand it, you haven't been paying attention. The gangs are taking over.

"You know the old movie Gangs of New York? No, Gangs of Philly, Gangs of San Francisco, Gangs of LA, Gangs of Chicago, Gangs of Detroit, and Gangs of New Orleans we talked about recently. This is going on around the country," Posobiec continued. "When you look at the White House or even the national media, there's no discussion of this whatsoever. No mention of the crime waves, not to mention the drugs."

"When I was a kid in high school and college, and I went to school at Temple University... And it wasn't as bad as it is now. You could go down to center city and it was fine. Go to the old city, go to south street. And my parents didn't mind, they'd say 'go have a good time. When my father was younger, he'd say if you went down to a Sixers, Flyers or Eagles game, you knew that you were taking your life in your hands and you might be mugged or worse, and you had to take steps to prepare for that. "

"We've turned back the clock on crime in this country. And the answers are simple: Lock up violent criminals, prosecute them, and then leave them in jail. Simple. Very simple solutions to very old problems," he concluded.
Jack Posobiec
Phill Gangs