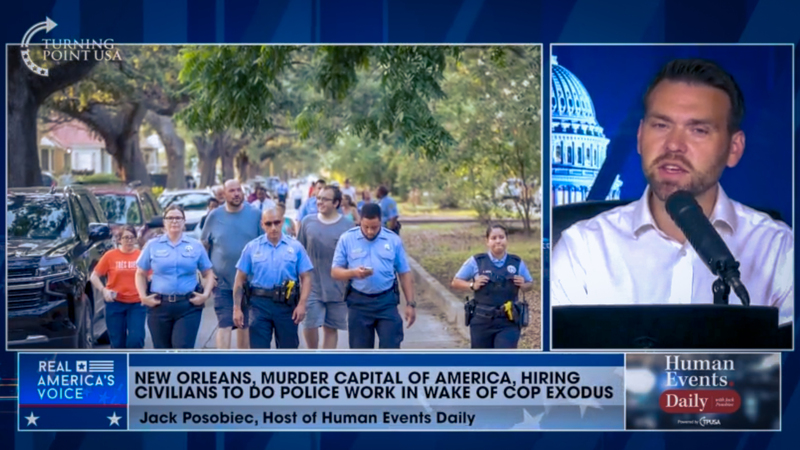 posonola
Human Events Daily host Jack Posobiec warned Americans to avoid blue cities as crime has gotten so bad that New Orleans, Louisiana, the newly crowned murder capital of the US, has begun recruiting civilians to do what is essentially contractor work for the New Orleans Police Department. (NOPD)

"Ah, the city of New Orleans! The Big Easy! You know, I'm going to say right now, I've never been a huge fan of New Orleans," Posobiec began. "Personally, my favorite southern city has always been Savannah. Yes, that's right, Savannah, Georgia... We all know New Orleans has that one nice quarter. But that's just one part of the city. The rest of the city, eh, not a huge fan,"

"Here's what's going on in New Orleans. It's now been named the murder capital of America. Congratulations, here's a pat on the back. Because the bodies are dropping in every major city in the United States, but New Orleans is currently number one. You did it," said Posobiec.

New Orleans recently beat out St. Louis as America's number one murder capital as the city has seen a 78 percent increase in homicides so far in 2022. The average response time for police to respond to an emergency is 11 minutes.

The goal of the new NOPD initiative is to enlist regular citizens to perform admin tasks, answer phone calls, and collect evidence. This would ostensibly free up cops to patrol the streets and be less burdened by paperwork.

"By the way, this is one of those things that they'll do to try to claim, saying 'what about the murders in red states, they're actually higher.' Yeah, but it's blue cities in those red states. St Louis is the same deal in Missouri. This is what they do over and over again," said Posobiec.

Posobiec then referred to how red states are generally safer than blue states, besides blue cities in red states. "By the way, when you look at those other states like New York, or Illinois, huge, massive swaths of red area, but the population of the main cities are so big, it swings the entire state."

"We're hearing now that the NOPD Superintendent says 'as we take calls over the phone, there may be some evidence that needs to be collected with that call will have civilians investigators then go out and collect evidence instead of having an officer go out there.' So you've got to hire contractors. They're contracting out the police work in New Orleans because it's gotten so bad."

"It's the same problem across the country: Go and look at one of these other leaders in the world. And how they deal with problems and they'll tell you it's very simple: 'How did you deal with crime in your country?', we locked up the criminals."

"'How did you deal with the drug dealers?' We put them away, and in some cases, they got the death penalty, those egregious enough."

"'How did you deal with immigration?' We closed our borders. No issue. Mass immigration never happened. We pushed back on the EU, like Italy's doing right now."

"We need to take back control of our cities, but until then, I don't recommend that you or your family go anywhere near them," he said.
Jack Posobiec
posonola