WATCH: Charlie Kirk Warns Conservatives to 'Stay Peaceful' as the Left Tries to 'Provoke' Conflict Ahead of Midterms 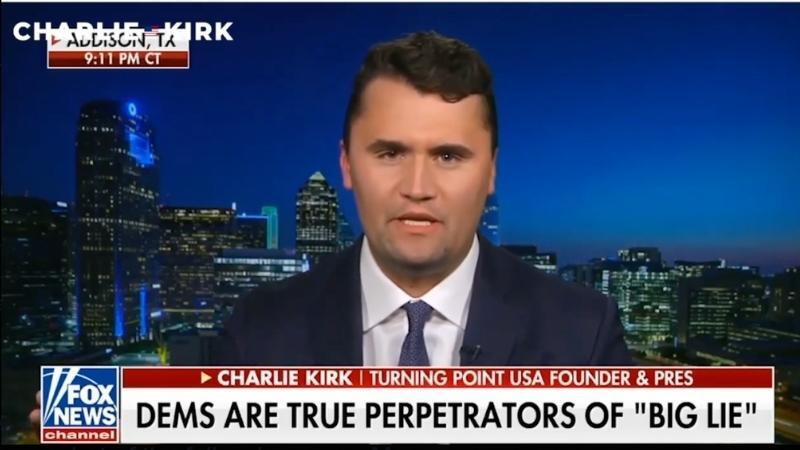 Kirk Ingraham
In a Tuesday appearance on Fox News' "Ingraham Angle," Turning Point USA founder and Human Events Senior Contributor Charlie Kirk shared his thoughts on the "outrageous" insults and accusations of "extremism" hurled at conservatives from Democrats ahead of the midterm elections, in attempts to "provoke" Republicans into losing out on their predicted upper hand.

According to Kirk the left is attempting to trigger the right into eliciting an extreme response that would work in the Democrats' favor as they try to retain control of the U.S. House and Senate this November.

"Charlie, the Democrats are out of ideas. I mean, their bag of tricks is spent," opened host Laura Ingraham. "And so now they're the ones who are, with a wink and a nod, kind of egging the activist class on, pushing them toward violence. And yet, they call the GOP the dangerous ones here."

"That's exactly right, Laura… So look, they're trying to provoke, I think, conservatives and Republicans, to do something that we shouldn't do and that's uncharacteristic," Kirk replied. "We have to remember, we have to stay peaceful in these next six weeks befor the midterms, because the language that Democrats are using seems to almost try to get Republicans and get grassroots activists just to say 'I'm mad as heck, and I'm not going to take it any longer.'"

Kirk then called out the far-left's hypocrisy, juxtaposing recent examples of violence on their part to President Joe Biden's accusations of extremism on the right, highlighting the tragic killing of 18-year-old Cayler Ellingsong over his Republican views.

"You see what happened in North Dakota, just a week and a half ago, where a 41-year-old man ran over an 18-year-old because of political views – Kaler Ellingson – and we have to be lectured by Joe Biden on domestic violent extremism. Meanwhile, over 60 pregnancy crisis centers were terrorized by Antifa and far left wing groups."

"If you look at some of the polling – and it happened gradually, and then suddenly over the last week – almost every single one of these Democrat Senate races are flipping in the direction of Republicans; whether it be Laxalt in Nevada, Walker in Georgia, Blake Masters in Arizona is looking very good, Pennsylvania and Ohio," Kirk continued, listing off some of the highly-contested races of the upcoming elections.

"You're starting to see that Democrats really act as if it's the last gasp of a dying regime. We have to remember that the more that we focus on these issues, the more we organize, the more they're going to be threatened… their language, I'm afraid, is only to get more outrageous now to the midterms," Kirk added.

Ingraham then played a clip of liberal Washington Post columnist Eugene Robinson claiming that the GOP is looking for "revenge" and has become a "criminal" and "authoritarian" party.

"They have no plan for governing, and they have no interest, really, in governing. It will all be about revenge," said Robinson in a Tuesday MSNBC interview.

"That's what's happened to the Republican Party. It is shocking. A shocking example of devolution into, you know, again, what's essentially a criminal slash authoritarian organization."

"What's happened, Laura, is they've run out of words, honestly," Kirk said in his reaction to Robinson's outlandish remarks.

"I mean, what else [do they have] besides 'despotic,' 'authoritarian,' [and] 'dictator?'... They just have to keep on repeating and recycling these words – and they're accusing Republicans of going on a revenge campaign, after, I don't know, the 45th, 49th, impeachment attempt of Donald Trump with the January 6 committee?"

"We're the ones that are doing the revenge campaign when they go after anyone in Trump's orbit for just the idea that they were associated with the President that wasn't supposed to win in '16?" he continued.

"Look, if that's their message, good luck. I'm telling you, these next six weeks, I think we're gonna see momentum like we've never seen before… They're losing on every issue voters care about. Their narrative is collapsing, and all they have left are these outrageous hyperbolic insults that are falling flat with voters."
Charlie Kirk
Kirk Ingraham