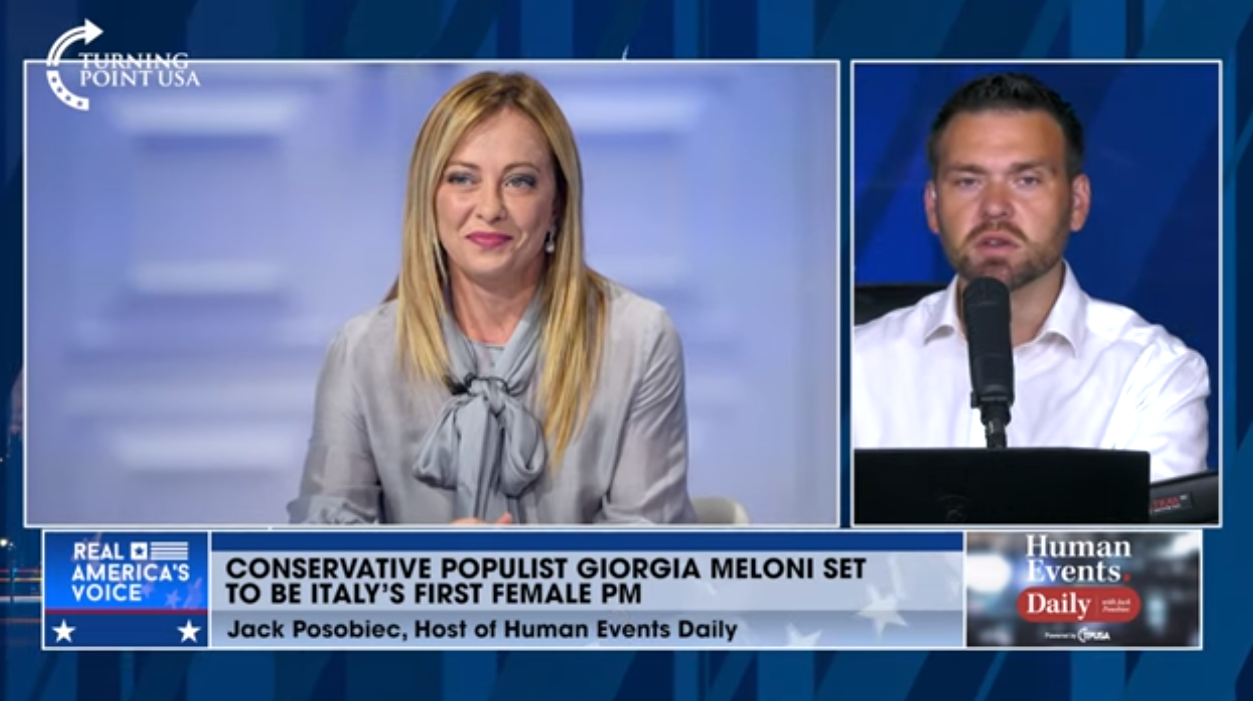 Posobiec Meloni
Human Events Daily host Jack Posobiec congratulated newly elected Italian Prime Minister Giorgia Meloni, whose staunch opposition to globalism and attacks on the family have put her in the crosshairs of leftists media who have smeared her as "far-right."

"Congratulations to Giorgia Meloni, the prime minister-elect, in a sense, of Italy. The first time, breaking the glass ceiling! Hashtag I'm with her. Nevertheless, she persisted," said Posobiec, mocking the 2016 Hillary Clinton presidential campaign.

"Giorgia Meloni coming in at the head of a pro-family, pro-God, pro-country platform in Italy. These ideas, the ideas of the conservative populist movement, and the ideas of the new right are sweeping the world. And you need to understand why, because she has identified very succinctly the agenda that is being pushed by the European Union, by Brussels, by Davos, by the World Economic Forum, the World Health Organization and so many others that is anti-family, anti-human, and anti-nation," he said. Her pro-family agenda has earned her the title of the most "right-wing government in Italy since World War II," BBC reports.

"The idea is, from their perspective, that they want you to not have families, and then when your birth rates plummet, they're going to say 'we need to open the borders for mass immigration.' The idea then becomes, 'the only way to backfill the people you thought you were going to have because birth rates have all gone down, we couldn't possibly set up a situation economically and socially for people to have more families and thus more children,' by the way imagine it. Italy doesn't have enough kids. ITALY. Rome, Naples, and stuff. What else are you doing?"

"If you know any Italian family, you know they all have kids. But it's true. In the country of Italy, back in the old country, they aren't having enough kids. Sicily, come on. Genoa, get it together. Looks like they are," Posobiec conceded.

"The idea is then, and AOC has been out there talking about this for America, saying we need more immigrants because we aren't having enough kids. She doesn't have kids herself, by the way. Meloni does. Big difference. Merkel, Kamala Harris, some of these people have no kids," said Posobiec.

Recently, AOC said that Americans weren't having families due to the burdens of capitalism: "There are quite a few countries that are really struggling because young people, under the burdens of capitalism and living in a society that is increasingly concentrating wealth among the rich, we’re not having kids. Or we’re not having kids at the same rate," Ocasio-Cortez said. "And we actually need immigrant populations to help balance things out. We can’t continue to fund social security, Medicare, all of this stuff without immigrants. And it’s always been that way. Don’t act like this is some new trend or anything like that."

"Here's the thing: what if we don't want that because what that creates is a downward spiral of low wages, because when you keep mass importing workers competing for low-wage jobs, you're keeping the wages down, and you're going to keep it down perpetually and when they stay down perpetually, people aren't going to be able to have families because they won't be able to afford them," said Posobiec. "They won't be able to afford homes, or larger cars for a larger family, or food, or education, et cetera."

"You should be able in every country to live and have a family and afford a family on a single-parent income," said Posobiec. "I'm not the first person to say that," he added. "But I think this is one of the driving causes of the new right and one of the causes of the success of the new right. The reason for that is we aren't centered on these insane ideals like globalism, and mass communitarianism which is really just mass communism under a different name, we don't pledge allegiance to the United Nations, we pledge allegiance to the flag of our country. So when Italy goes and supports the policies of being Italy first, then I can understand that."

"I can understand why Americans would then be supporting candidates that are America first, because it's about putting the needs of your country and the needs of your people first. It doesn't mean you hate the rest of the world."