WATCH: Rand Paul tells Jack Posobiec about his call to investigate Fauci and the origins of Covid 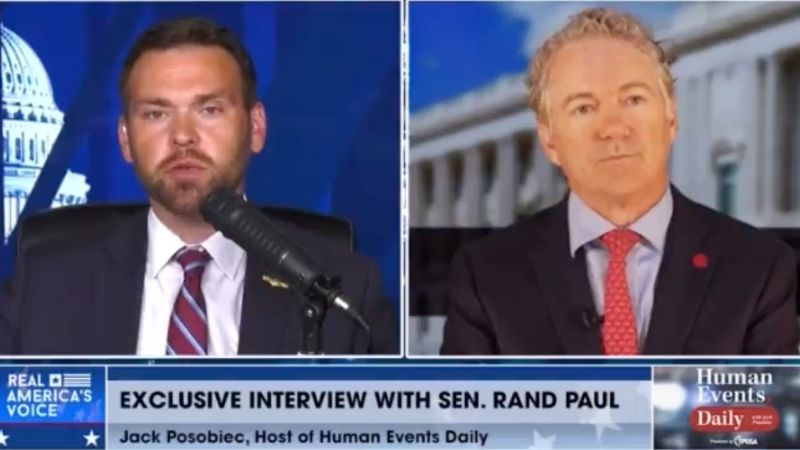 Rand Paul Jack Posobiec
On a Sunday Special episode of Human Events Daily, host Jack Posobiec spoke with Kentucky Senator Rand Paul about his call for a special council of scientists and medical experts to investigate Fauci and the origins of Covid.

"I think by the time we're done with the investigation, and by the time we present this to the public, I think people are going to go, 'Holy cow, this thing came from a lab'," Rand told Posobiec. "I think the majority of people will finally accept that the preponderance of evidence says that this came from a lab."

Previously Rand Paul had explained how he intends to create a committee with subpoena power that would be led by someone "capable of leading a large investigation," such as a former attorney general or assistant attorney general, or somebody that had been in the Department of Justice. Paul specified how the committee would be co-led by a scientist.

"Dr. Fauci was successful in the beginning," Paul states, because "he can talk circles around people who aren't as familiar with the science." By populating an investigative committee with scientists and doctors Paul says it would prevent Fauci from dishonesty through jargon unique to his field.

"There are many experts that have at least the credentials of a Dr. Fauci or some of them with much greater credentials, who have been saying for years" that Covid, or diseases like it, could escape from a lab doing gain of function research, said Paul.

Posobiec mentioned that Fauci had told Paul during Senate committee hearing questioning that "the reason for these gain of function experiments was that we would have a plan in place, we would have something on the shelf, an anecdote" should something like the Covid pandemic, or any infectious disease pandemic occur."

Paul explained how dubious that reasoning from Fauci turned out to be. First, Paul gatherers several scientists who went on the record to state "they're not aware of any gain and function research that has created any virus that later came about naturally or that we were able to develop any kind of treatment from."

Paul explained the difficulty with the premise, as there are so many millions of mutations of a particular virus in the wild that it reduces the possibility to almost zero that humans could pinpoint and develop an antidote on one engineered mutation. Paul then explained that mRNA technology and the modern process for creating vaccines somewhat renders gain of function research invalid, if the reason is to find cures for viruses.

"This is being done behind the borders of the People's Republic of China under the auspices of a CCP-controlled research facility," Posobiec said, shedding light on some of the other possibilities as to why gain of function research is being conducted as he asked, "what other methods or uses they could be looking for whatever comes out of this lab?"

The two men then returned to discuss Fauci and if Paul's committee would investigate the vaccine approval process.

"You have to realize the level of resistance that Dr. Fauci has put up," Paul said, "this makes us think that there is something to hide."

Through a Freedom of Information Act request, Paul discovered "that 1,800 NIH doctors have received $193 million" from pharmaceutical companies, including those that created Covid vaccines. But they were unable to find exact doctor names and company names.

Paul noted that Fauci was on the record back in 2004 citing "naturally acquired immunity" as a valid way to combat viruses, but then changed his tune dramatically for the age of Covid.

Paul and Posobiec also spoke of elitism and the danger of unelected bureaucrats affecting public policy as well as Donald Trump and his current battle with Biden's DOJ.

"I think the burden is on the FBI to show that they're actually obeying the law," Paul said, while noting that the United States is drifting towards banana republic-style governance for its treatment of Trump.
Rand Paul Jack Posobiec