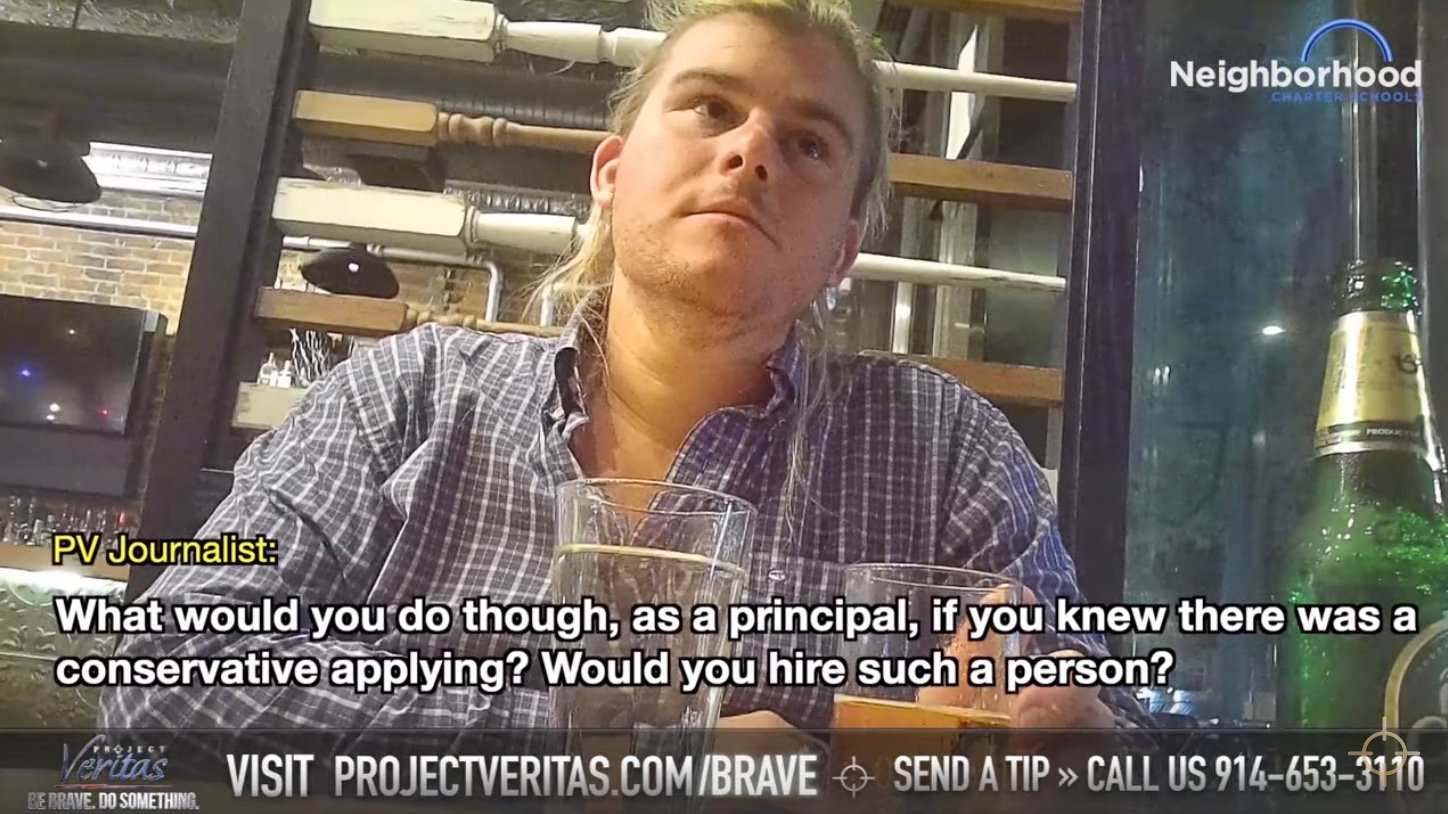 Project Veritas has exposed another teacher who engages in discriminatory hiring practices and encourages the indoctrination of students. An assistant principal in Neighborhood Charter Schools in New York City is revealed to use interview questions to weed out candidates who will not go along with his progressive agenda.

"We have very specific questions, and ultimately our Diversity-Equity-Inclusion question, our DEI question is—it's very telling if somebody has done a lot of work within themself, within the profession... if people don't answer that question right, they are just an automatic not hire," Todd Soper, Assistant Principal for grades K-4 with the Neighborhood Charter Schools told a Project Veritas undercover reporter.

"Neighborhood Charter Schools," they write on their site, "serves all students while incubating a high-quality ASD program which makes up 15% of our student population. At NCS we believe academic achievement and social-emotional growth are imperative to developing the whole child."

They say that they are "one of the top-performing charter schools in New York State" and have locations in Harlem and the Bronx.

"If they [candidates] say that diversity is about—if they say something that lends itself to be colorblind, which could happen, like, 'Oh, it's like, you know, like everyone is equal.' Those things that are well-intentioned statements, but they're missing the depth of understanding of how the intersections of our identity live out in the world. So that person wouldn't get hired," Soper said.

A teacher who believes that all men are created equal would not get hired, according to Soper.

"Our student's lives matter based on the color of their skin," he said, "and how that intertwines into the context of the world. So, if you're not willing to embrace fully that aspect of our students—and that means talking openly about race and talking about injustices in the world, then I don't know if you're going to be able to fully fulfill your [teacher] responsibilities," Soper told Project Veritas' undercover reporter.

Soper said that he encountered a teacher who "didn't want to teach Black Lives Matter" ideology to her students, and left the school. For Soper, that was reasonable because "she would've probably been fired eventually just based on mindset."

"We have always and will continue to embrace diversity on all levels," Soper said, after having admitted that viewpoint diversity was not welcomed. "So, the same way we embrace identities that are based off of ethnicity, skin tone, and gender, we also embrace orientation."

"Like for Pride month," he said, "we got—every kid had a mirror and we talked about—a read-aloud about an animal, or about a boy that said he wanted to be a mermaid. It's a way to start, like, 'You should be whoever you feel like you should be.' That was kind of the message of [the] read-aloud."

"It's delicate, right? So in kindergarten and first grade, they [students] are five and six [years old]—but I think we start with the umbrella theme of, 'Embrace who you are. You have to love who you are, and each part of you is beautiful, whatever you feel.' As kids get older and the idea of gender becomes more salient, which happens more towards fourth grade... the conversations deepen as the kids get older."

Project Veritas has been releasing exposes showing teachers in public and private schools who are unabashed in their efforts to discriminate against teachers that do not uphold progressive ideology and practices of indoctrination.

An administrator in Greenwich, Conn. was placed on leave after he was exposed. A teacher at the private Trinity School in New York suggested that white boys should be killed, and the fall out from that is still ongoing.