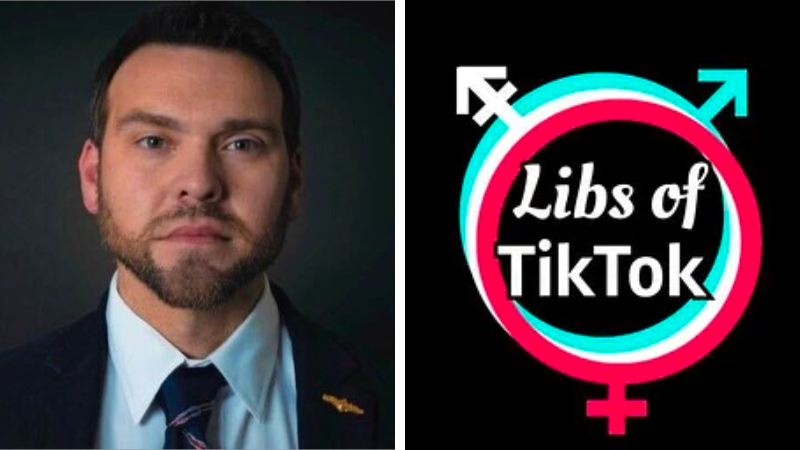 After being suspended on Twitter for telling the truth, account Libs of TikTok was back over the weekend to tell her story to Jack Posobiec and Human Events Daily. The long form interview with Libs of TikTok founder Chaya Raichik, first of its kind, follows an incident last week where a fake bomb threat was called in to Boston Children's Hospital—and mainstream media blamed Libs of TikTok.

"This incredible reward started at $20,000, now it's up to $40,000 for information that leads to the arrest of the person who made this false bomb threat," Posobiec said, noting how insane it is that the same journalists who blame Raichik for the bomb threat won't cover her efforts to get that person identified.

"I think that 40 number," Posobiec said, "seems like a weird number to me, I think it should be 50." He pledged an additional $10,000 from the Human Events team to "top it off" to $50,000. Human Events wants to get to the bottom of this, and find out who really called in these threats.

"Wow, thank you so much," Raichik said. "That is incredible. Anyone contributing in any way to catch this scumbag who did this is incredible."

"This is not partisan," she continued. "We should all want to find this person. It's a children's hospital. It's horrible," she said. "They should catch that person, they should be prosecuted, and he should be thrown in prison."

Libs of TikTok is being blamed by high profile journalists at the Washington Post who believe that she is behind the revelations that Boston Children's Hospital performs so-called "gender affirming" surgery on minors. Boston Children's Hospital was promoting the fact that they do these kinds of surgeries, both to alter and disfigure genitals as well as breasts, on minors. That's how people who oppose the mutilation of children became aware of it. Libs of TikTok amplified those revelations, brought by Chris Elston, as well as The Post Millennial.

Neither the fake bomb threat, nor the pushback from media outlets who want her to stop exposing hospitals, clinics, libraries and educational institutions that harm children with radical gender ideology, has encouraged Raichik to stop the work she's doing. It's only recently that she's begun to offer any commentary on it at all. Her account gained notoriety because she was literally reposting videos that were publicly available on other platforms, exposing people in their own words. That's what she continues to do. And because of that, she was doxxed and defamed.

She said she's "reposting from these people publicly available stuff, videos, screenshots, pictures, all publicly available that they readily put out. And I just take that I bring it to Twitter, and I just present it to my audience and say exactly what this is what they're saying."

"There's an entire industry on the left that does this to the right," Posobiec said. "Media Matters, Right Wing Watch. KFile over at CNN, a lot of the BuzzFeed people that are there. All they do is report on stuff that the right says or or people say, and in many cases they'll even report people or dox people like yourself, by the way, who was a victim of doxxing by the Washington Post's Taylor Lorenz."

"It's a very common practice to take publicly available media or information and use it and repurpose it. That's what everybody does," Raichik said.

In response to the fake bomb threat, Raichik said, people were calling for her arrest and for her to be "completely deplatformed." Some were even calling her a terrorist. The videos that were shared came from Boston Children's Hospital's own YouTube page where they were advertising their gender clinic to prospective patients and their parents. The website even contains testimonials from young teens attesting to taking puberty blockers and cross-sex hormones.

Instead of investigating these dangerous practices, media came after Raichik, instead.

"You're on Human Events, we're covering it. I know Post Millennial covered it, a few other places covered it. Have any of these establishment or left-wing reporters that you're talking to, have any of them covered it?"

"This offer, not a single one covered it," Raichik said.

"Not one piece of coverage," Posobiec said. "Because at the end of the day, this isn't about actually finding the person, they don't care. They don't want to find them unless they can somehow prove that it was you or your brother or someone connected to you in any way. They care more about taking out you than they do about protecting children."

"They have no interest whatsoever to discuss this highly controversial issue of whether or not, we should be giving children— minors— these types of procedures in our country," Posobiec said. He brought up the research Post Millennial has done, digging into scientific journals to uncover the truth about surgical procedures on minors for the purposes of treating gender dysphoria—and it is happening despite the protestations otherwise.

"It seems to me that this is one of those things that, as a society, we never really had a conversation about," Posobiec said. "We just sort of— it was the medical community that decided they wanted to do it. The research community decided to say in academia said 'oh, this is good, just go ahead and start doing this.'"

"We're not just talking about hormonal treatments, which you already know, hormonal treatments create long lasting changes that could be permanent. In some cases, with a hysterectomy, you're talking about complete, irrevocable change, you are taking away someone's ability to reproduce at the age of 14 or 15. In some of these cases, at a time where you're not allowed to vote, you can't own a gun, you can't drive a car yet. And yet we're saying that you can make a decision to take that away that you can never change for the rest of your life."

"There's no laws on the books about this and these companies are just more than happy to be able to provide this. Why are we doing this?"

"It's the biggest medical scandal in modern history. And we haven't been addressing it enough. And that's what I have been doing the last few weeks, and a lot of people have been doing, everyone who's covering this, I appreciate it. We need to bring more attention to this problem."

Posobiec and Raichik delved further into the issue of "gender affirming medicine," medical autonomy for kids without parental oversight, the nature of moral judgment, Edgar Allan Poe, and so much more on the Labor Day Special from Human Events Daily.