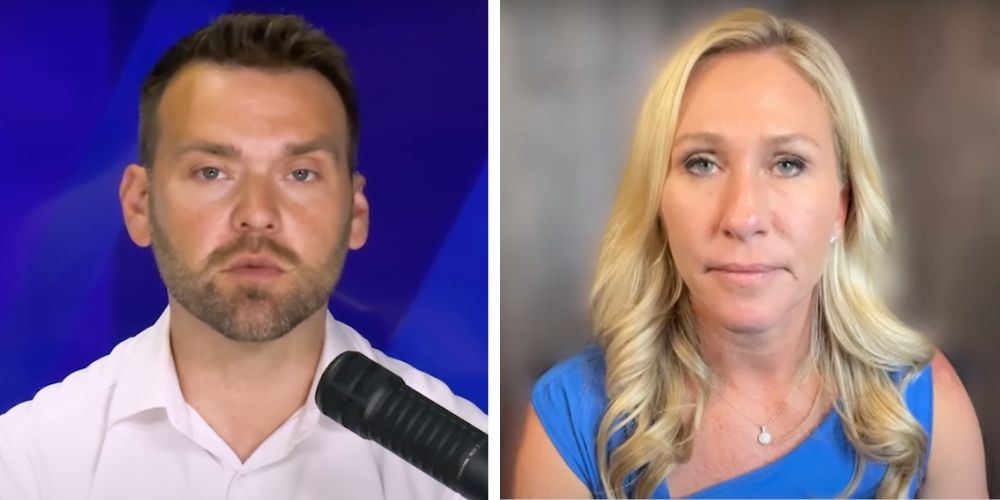 Georgia congresswoman Marjorie Taylor Greene joined Human Events Daily with Jack Posobiec in an episode released Sunday, where she spoke out on the importance of the Protect Children's Innocence Act after being swatted multiple times.

Greene, a Republican, has recently made headlines with the introduction of the piece of legislation, that would federally prohibit minors from getting so-called "gender affirming care," which includes sex-change surgeries, transgender hormone therapies, and puberty blockers.

This reportedly upset a trans activist, who swatted the congresswoman by making multiple false 911 calls to trigger an armed police response at Greene's home in Rome, Georgia. Since the recording of the podcast episode, Greene was swatted for the third time in less than a week.

In the first swatting incident, officers were dispatched to Greene's residence "in reference to a male who had been shot five times in a bathtub. The call came in from a veterans' crisis line. As the details continued to be relayed, it was reported that the female was still in the residence and possibly had some children inside with her.

Floyd County police arrived and the situation was quickly diffused once they realized someone had made a false call.

Hours later, authorities received a call from a computer generated voice which said they were upset with Greene's proposal to criminalize transgender surgeries and hormone therapies for children.

After Greene was swatted again the next night, she joined the Human Events show with Posobiec, who began the show asking if the congresswoman was alright.

"Yes, I'm okay, thank you so much Jack. And my family's okay...everybody's okay," replied Greene. "But the reality is, it was basically an attempted assassination by police, in the form of swatting on a member of Congress."

She recounted the first swatting instance, where she "was woken up after one o'clock in the morning" to doorbells, knocking, flashlights, and hearing people outside of her bedroom window.

"I was going to take my gun to the door, but I did not, thank God. I went to the front door to police outside my front door and [in] my front yard. I opened the door to a very serious situation," Greene began.

"The police informed me they were responding to a 911 call where someone had called in and said that a person had been shot five times in the chest, and was lying in the bathtub. There were children in the home, and there was a there was going to be potentially more murder or suicide happening. So when police get a call like that, as you know Jack, they show up tactically prepared, guns drawn."

The freshman congresswoman, who won her primary race for re-election this November, then doubled down on her strong stance against children being allowed to transition.

"The person called back afterwards, and confessed. The reason why they swatted me was because I am against transgender surgeries for children," Greene claimed.

"I've taken a very strong stance against it, and they are angry at me for that. They wanted to have me murdered by police. They wanted to ban it. [They wanted] harm done to me or my family because I introduced a bill the week before, the Protect Children's Innocence Act, to make this a felony for anyone performing so-called 'gender-affirming care' on children under 18.

"Yeah, no double mastectomies, no hysterectomies, no castration, no puberty blockers, no hormone therapy for any child under the age of 18… And they're mad at me for that. They're so angry at me. They want to kill me for it."

Greene noted that there is now a federal investigation into the swatting incidents.

"They know, of course, that you're a supporter of the Second Amendment. They knew what they were doing," Posobiec said, noting the gravity of the situation. "They knew that it was one in the morning, and the second time three in the morning. I think personally that these folks hoped that you would answer the door with a gun out… they were trying to provoke a type of situation like we've seen so many times," he said in reference to instances of police shooting people who answer the door armed.

"This is why personally, I've spoken out against Red Flag laws, because they're trying to provoke one of those types of situations. That leads to somebody getting shot… Have you given any thought to the fact that this could have gone a very different way for you?" Posobiec asked his guest.

"Yeah, I'm glad you point that out, Jack, because that's exactly the way I thought about it," Greene responded. "Normally, in the middle of the night, even in the daytime if I'm not expecting someone to my house, I will carry my gun with me to the front door."

"I'm a member of Congress. I've had a lot of death threats. You know, there's people out there that wish me harm due to the horrible things the media has lied about me… And the fact that I had that gut feeling, you know, even though I was very disoriented, just being woken up, but something told me don't take the gun with me."

"Thank God I didn't because that is how people get killed… I think whoever was doing this to me knew that very likely I would take the gun with me to the door and be so shocked with police coming to my house in this manner… I think their aim was to get me killed."

On Saturday, after the podcast with Posobiec was recorded, Greene was dangerously swatted for the third time in the past week.