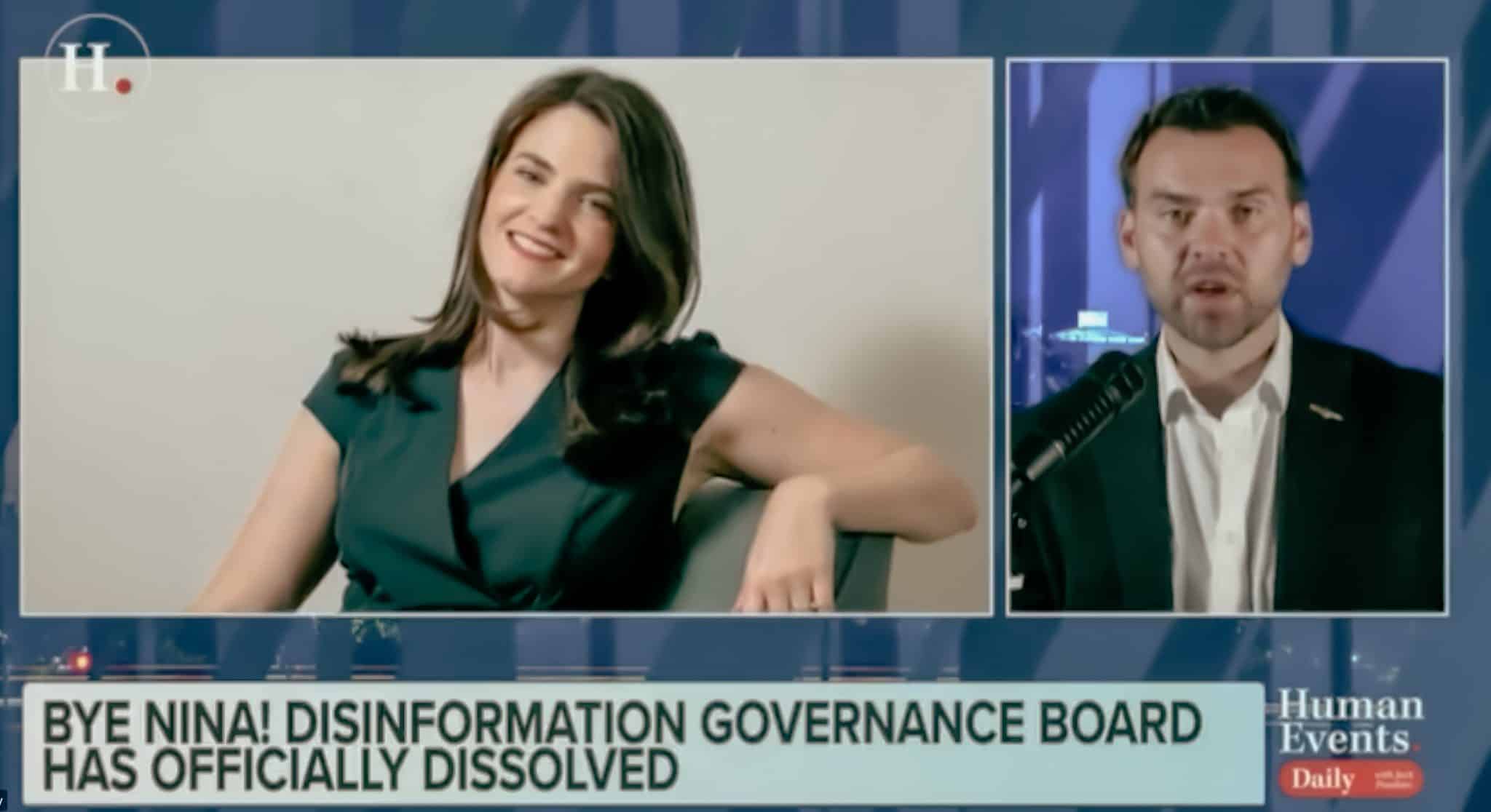 "You tried to put one over on the American people, and I stopped you," Jack Posobiec said of disgraced Ministry of Truth czar Nina Jankowicz on his Wednesday "Human Events Daily" podcast.

"You tried to create a censorship board inside a law enforcement agency of the federal government," Posobiec continued, "And I took it down. We don't do that in the United States of America." In late May Jankowicz publicly named Posobiec as the person she most singularly blames for her downfall and the Ministry of Truth's evisceration.

In her first interview since the board's end, Jankowicz told MSNBC host Chris Hayes that her resignation was the result of a grandiose conspiracy or "coordinating mechanism" as "all these sensationalized narratives about what people thought the board was going to do was completely wrong."

"Every characterization of the board that you heard up until now has been incorrect, and frankly, it's kind of ironic that the board itself was taken over by disinformation when it was meant to fight it," she said.

"And it was completely illegal, what you were trying to do" Posobiec said, "not to mention completely immoral and an obvious violation of the rights of every single American citizen in this entire country."

In April President Joe Biden created a 'Disinformation Governance Board' under the Department of Homeland Security and named Nina Jankowicz as director. While DHS Secretary Alejandro Mayorkas publicly said the board was designed to deal with misinformation and disinformation from bad actors like Russia, Posobiec was first on the scene to note dubious qualities of Jankowicz's record, especially her partisanship and anti-free speech record.

For example, Posobiec noted that Jankowicz had previously said that "free speech vs censorship" framing is a false dichotomy. Similarly, Jankowicz had rebuked Twitter for stopping its policy of limiting free speech from users about the 2020 presidential election. Instead, she said she was "dismayed about this decision" because of the "long-term damage these lies do to our democracy."

After the Ministry of Truth was disbanded Jankowicz named Posobiec as the agent of its destructio. In May, she told NPR's "Fresh Air" host Terry Gross, "what I think happened is there's a very kind of tried and true method through which messages travel in the conservative media ecosystem," and she said, "a tweet from Jack Posobiec, the right-wing influencer, influenced the rest of the conversation about me."

"We saw, again, this coordinated messaging campaign on the floor of Congress, where many of the same tweets that Jack Posobiec had highlighted were then blown up onto poster board and decontextualized, during congressional hearings," Jankowicz remarked about the many clearly contextualized statements Posobiec highlighted on social media.

Despite the White House claiming Jankowicz was an expert, more of her past positions simply came to light because of Posobiec. In 2020 she said "Critical race theory has become one of those hot button issues that the Republicans and other disinformers…have seized on," in a statement of misinformation about GOP concerns over CRT's infiltration of the public school system.

Christina Pushaw, press secretary for Republican Florida Governor Ron DeSantis, took a deep dive into a controversial book Jankowicz had written that called for the censoring of the internet because women couldn't handle reading mean tweets.

From Mary Poppins impressions to saying "there are a lot of people who shouldn't be verified," on Twitter because she did not find them "trustworthy," Jankowicz's past positions were made public by Posobiec and others, which lead to scrutiny and then the end of the Ministry of Truth.

Posobiec ended by saying it was nothing personal, however, and that Jankowicz would do well to return to singing and "put all of this in song and release your next diss track."