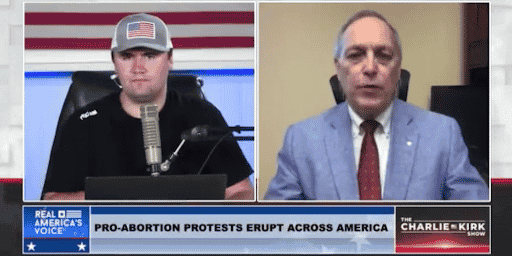 On Monday's episode of The Charlie Kirk Show, Representative Andy Biggs (R-Arizona) explained that despite the Democratic party's focus remaining on January 6 in an attempt to sway voters in the next election cycle, the greatest issues among his constituents are inflation, the economy, and border security.

Biggs explained that as inflation rises across the United States, Phoenix, Arizona has been hit the hardest and is currently experiencing the highest rates in the country.

"My voters in Arizona, and I've looked at multiple polls, not just the ones that I've run, but others have run and the top two issues, and they're almost neck and neck, are the inflation and economy," Biggs told Kirk.

"That's right there with border security. And actually, most of the time, border security is on top. But they're both very close, and they both have tremendous impact on Arizona," Rep. Biggs explained. "Arizona, particularly the Phoenix metro area, has effectively the highest inflation rate in the country."

Earlier this month, hundreds of illegal immigrants were filmed crossing a section of the southern border near Yuma, Arizona, with estimates of total border crossers reaching 800 people.

As for inflation, fuel costs have reached an all-time high, costing some Arizona residents more than $5.70 per gallon to fill up their tank. Not only have fuel costs increased, but inflation has rocked grocery and housing prices, putting a noticeable dent in the pocketbooks of the American middle and working class.