DHS Warns Catholic Churches to Prepare for ‘Night of Rage’ 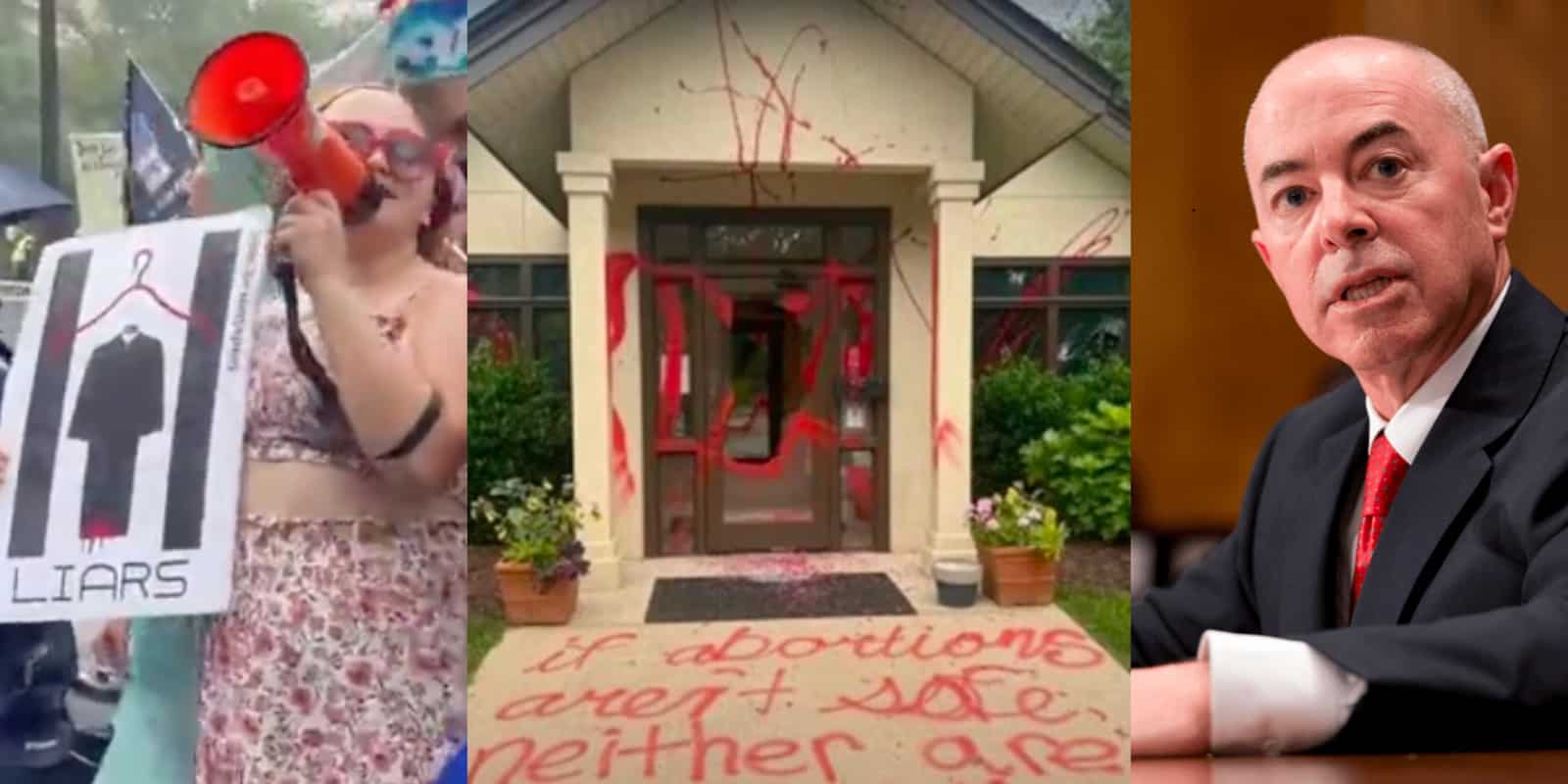 The Department of Homeland Security has shared intelligence with the Catholic Church about a planned "Night of Rage" that has been threatened to be unleashed by pro-abortion groups in the event of Roe v. Wade being overturned by the Supreme Court.

The document, labeled an "urgent memo," was released to all clergy by the Diocese of Stockton, Calif., and states that a DHS agent informed that that an "extremist group" has been calling for attacks on churches the night that the ruling is released.

While the threats are not specific, DHS agent Jesse Rangel informed the Church that "large groups with cells nationwide have already been discovered 'casing' parishes," including those in California, per Newsweek. As such, the diocese issued a "critical notice" for clergy and further instructed them to "develop a plan should you see or hear anything suspicious."

"Make sure you have ushers and or security available during your services and perhaps identify who among your volunteers and parishioners are law enforcement," the memo reads.

These threats, and the intelligence, were noted by pro-life activist Lila Rose, who is the founder of Live Action.

Rose expressed her concern that the threats represent "the most coordinated & aggressive domestic terrorism in our nation today. All because extremists are angry that they may not get to kill children in the womb, on demand, without limit." She decries media for not taking these threats more seriously.

"Suspicious activity would include someone asking out of place questions (Largest Mass times? Doors always open? Do you have security?), looking around church property, protestors, and general disturbances," the memo from the diocese reads.

The looming Supreme Court ruling on Dobbs v Jackson Women's Health Organization sent pro-abortion activists and militants into high gear against churches, pregnancy centers, and pro-life groups. One of those groups is Jane's Revenge, a seemingly leaderless movement that has targeted pro-life organizations with arson, graffiti and threats.

After a draft ruling on Dobbs was leaked from the Supreme Court in May, Jane's Revenge began posting anonymously online, stating their intentions to enact a "Night of Rage" on the night that the decision drops. By mid-June, the group issued a statement saying that the 30 days of mercy have "expired."

"We have demonstrated in the past month how easy and fun it is to attack. We are versatile, we are mercurial, and we answer to no one but ourselves," the group wrote, and before stating its aims.

"You have seen that we are real, and that we are not merely pushing empty words," the group stated, noting that in addition to the visible attacks mentioned, its members "work in countless locations invisibly."

"You know that we are serious." Much of their graffiti reads "If abortions aren't safe, neither are you."

Republican lawmakers have insisted that the FBI and Department of Homeland Security label Jane's Revenge as "domestic terrorists."

"We are calling on the Department of Homeland Security and the Federal Bureau of Investigation to officially classify those committing crimes through Jane’s Revenge as domestic terrorists in response to their clear involvement in acts dangerous to human life," they wrote.

"Churches and pregnancy centers are at extreme risk and the members of Jane’s Revenge have been clear that they will not stop their reign of terror until pregnancy centers stop providing life-affirming services," the letter stated, and apparently DHS agrees.

"You must immediately call these criminals out for what they are, domestic terrorists, and use the full extent of your powers to prevent their intended bloodshed," the Republican lawmakers said in the letter.

While the White House has "denounced" any violence or threats that may come after the Supreme Court ruling, it has also been unwilling to say that it would find legitimacy with the ruling. Instead, it has stated that it would seek action in Congress, for that body to "restore Roe." This per White House press secretary Karine Jean-Pierre.

When Congressional Democrats recently sought to enact a law that would "codify" Roe, and create a federal law that would legalize abortion for all 9 months of pregnancy, they were unable to get the votes needed to pass it.

Pro-abortion activists gathered outside the Supreme Court on Thursday, declaring that they "will shut this country down" in the event that Roe is overturned. Decisions are still forthcoming from the Supreme Court for this term, and Dobbs is among them. Some were actively and vocally opposed to the church.