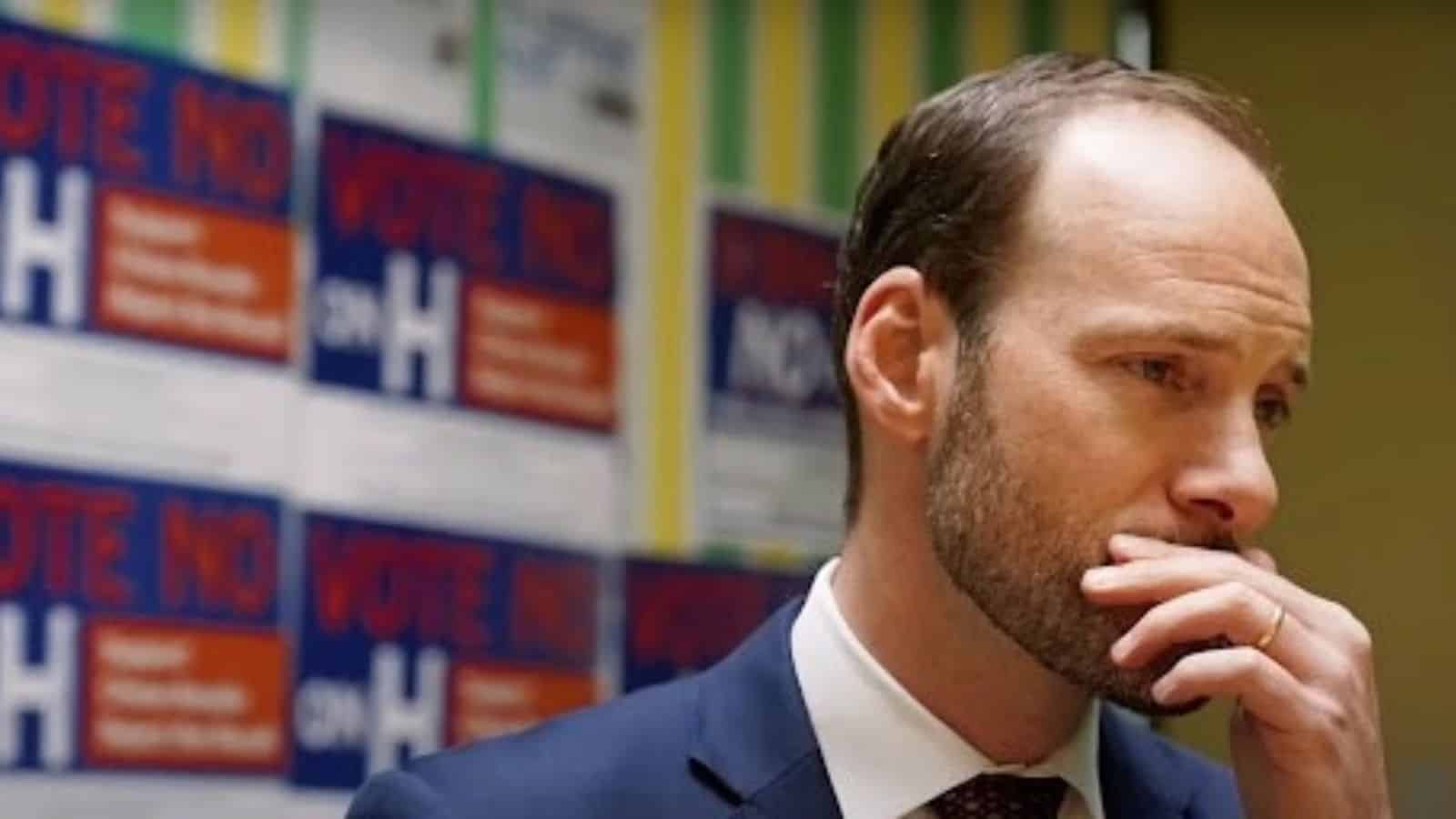 Is Atlas shrugging even in the liberal haven of San Francisco?

The Ayn Rand novel Atlas Shrugged predicted that the liberals would go too far one day.

On Wednesday, that city’s district attorney, Chesa Boudin received just 39% of the vote in a recall. Interestingly, that is exactly what Republican presidential candidate Barry Goldwater received in the 1964 contest with President Lyndon Johnson. Though it’s difficult to compare the historic importance of the two elections, there is much more significance to Boudin’s defeat than might otherwise be thought.

San Francisco has already gotten rid of its school board after the half-wits there wanted to strike the memory of Abraham Lincoln from a school building because the late president wasn’t sufficiently racially woke for these historic know-nothings. That was a signal that even San Francisco had had enough of the cultural purge of American history.

But Boudin’s defeat means something more. This is civil war in the Democratic Party and a blistering shot to the bow of the listless Democratic ship that its core constituency is pretty damn mad and not going to take much more from a party leadership sycophantic to the woke left.

If the progressives in San Francisco are sick and tired of people like Boudin, then it doesn’t bode well for President Joe Biden, the Democratic Party, a lot of liberal senators, and dozens of representatives who are sure to go down to defeat in the November midterm elections unless the Democratic con machine can come up with some really good game plan. And they are really running out of plays.

You had to laugh at Boudin’s last-minute declaration that there was a dramatic uptick in support for his campaign to save his political skin as he blamed rich Republicans for causing all of this fuss. Rich Republicans in San Francisco? There hasn’t been a rich Republican in the city since the Gay ‘90s of the nineteenth century and that description had nothing to do with sexual orientation.

I remember California when it was Reagan country. John Wayne lived in Orange County. Richard Nixon came from Yorba Linda. It really was a promised land where people came to get rich and find better jobs. Now people leave because people are stealing their cars or they’ll soon be paying $10 for a gallon of gas.

Today, San Francisco is dominated by rich Democrats like House Speaker Nancy Pelosi and her billionaire husband Paul Pelosi – fresh from a DUI charge that the California Highway Patrol is having the very devil of a time finding the documentation for (as you know if you’ve been following the story with Fox News' Jesse Watters). No, the elites are firmly entrenched in the Democratic Party, and, who knows, they might have voted to keep Boudin as their DA – but very few of the little people did.

Mind you, Boudin was only elected to his office by the slimmest of margins, with 50.8% of the vote. Maybe people didn’t think he was serious about firing all of the prosecutors, rewriting the penal code in a newly authorized woke version, and making sure that “lifestyle” crimes were no longer judged to be serious enough to warrant arrest. What’s a lifestyle crime? Well, if you shoplift, according to Boudin, you only do so because you’re forced to do so because of your socio-economic conditions so society and the poor sucker who owns the drugstore shouldn’t take offense over that. So in San Francisco, people were just literally walking into stores, loading up with merchandise, walking right past the cash register, and running on home.

Have you been to San Francisco lately? I remember the city when it could still be called the jewel on the Pacific Coast. It’s not even cheap paste these days. You have to walk over the strung-out addicts to get on the train, and people are literally urinating and defecating all over the sidewalks and streets as if it were as normal as smoking a cigarette used to be. There are homeless people gutting hotels and just doing drugs on the sidewalks while the city hands out free drug paraphernalia kits. This is called harm reduction. The city hasn’t quite figured out how to reduce the harm to the law-abiding citizens who are just trying to make a living and keep their families safe from the escalating crime.

Boudin has been joyously insouciant about all of this. If people aren’t being sent to jail, they’re getting out early and repeating their crimes. And yes, it’s not all shoplifting and petty theft. Violent gun crime is surging and homicides are going through the roof.

Do you ever wonder why these crime spikes are occurring in Democratic-led cities that have the harshest gun control measures? Think of it: there’s not a weekend that goes by without a shoot-out in Chicago yet it has some very tough gun control legislation. Chicago Mayor Lori Lightfoot blames the neighboring states for all the trouble. Who can San Francisco blame: Oregon?

Boudin of course is not the only problem DA in the country. Just follow the George Soros money to find out who else has to go. Los Angeles DA George Gascon is also notorious for coddling violent criminals and using the velvet glove on people who should be serving hard time but end up giving other people a hard time. He recently sent a guy to summer camp who barreled his car into a mother and her eight-month-old son. Gascon even lied about the sheriff approving of the sentence before the law enforcement officer set the record straight and said no, he had not.

You can follow the DA disaster here all the way to the East coast: from LA to Chicago to Philadelphia to New York. Soros must have thought he found the Achilles heel of the American people: buy the DAs and you destroy the justice system and inevitably rot America to the core. But perhaps he forgot that there is still something called democracy in America and that recall campaigns work and that even liberals come to the point of saying “I’m as mad as hell and I’m not going to take it anymore.”

There is so much talk about our living through a redux of the 1970s. And by God, it does seem like it. There’s the inflation, the spiking gas prices, the incompetent, pusillanimous president, a weak America seemingly without efficacity on the world stage, the urban crime, the horrible men’s fashions, and on and on. But there was a joke from that era that ushered in the Reagan presidency that seems especially prescient right now. “A conservative is a liberal who got mugged last night.”

And that’s exactly what’s happened to San Francisco: the entire city has been getting mugged under Boudin and they’re suddenly seeing the world in a different ideological light. Maybe it’s time to wake up from all this wokeness. Maybe it doesn’t make sense to take all the guns away from the law-abiding people and reduce the severity of the sentences for gun violence. Maybe I’ll need a gun at home because the DA has put a strait jacket around the police force or the mayor and city council is defunding them.

These are the decisions that liberals are facing and they are saying the woke ideology is bankrupt.

So where does this leave Biden? In a very lonely place. Much like his buddy to the north, Canadian Prime Minister Justin Trudeau, he’s so woke he’s getting no rest. Biden has deserted all of the traditional Democratic constituencies because he’s spent every day of his presidency toadying up to the far-left of his party, in chronic fear that they are going to depose him and replace him with Sen. Bernie Sanders (I-VT). If you’re a traditional Democrat who believes in a strong national defense, you won’t be backing Biden or any Democrat because this president has utterly failed America, looking like a blind fool on the world stage as it stumbled out of Afghanistan like a drunken bureaucrat and blithely keeps a war going in Ukraine with no strategic objective in mind except to kill more Russians and Ukrainians while sleepwalking towards a nuclear confrontation.

If you think the southern border is important, you can forget Joe, because he doesn’t even know where it is. Can’t find it. No problem there. Another migrant caravan on the way? Come on over!

What about surging crime in the cities? Well, we just saw how the most liberal city in America feels about that.

Ah, but the real kicker is inflation. Very few people are stupid enough to buy Biden’s line that it’s all due to “Putin’s war” and nothing to do with the president’s multi-trillion-dollar giveaways that fueled inflation like gasoline ignites a fire.

So it’s difficult to know if Biden was aware of the San Francisco recall vote or if he even knew of the political problems facing Boudin. God only knows what his staff is telling him and keeping from him these days. But Democratic operatives should be watching and assessing the results with fear and trembling.

These numbers spell doom for the Democratic Party in November.