Walking on Eggshells, Living on the Edge: Minneapolis, Minnesota. 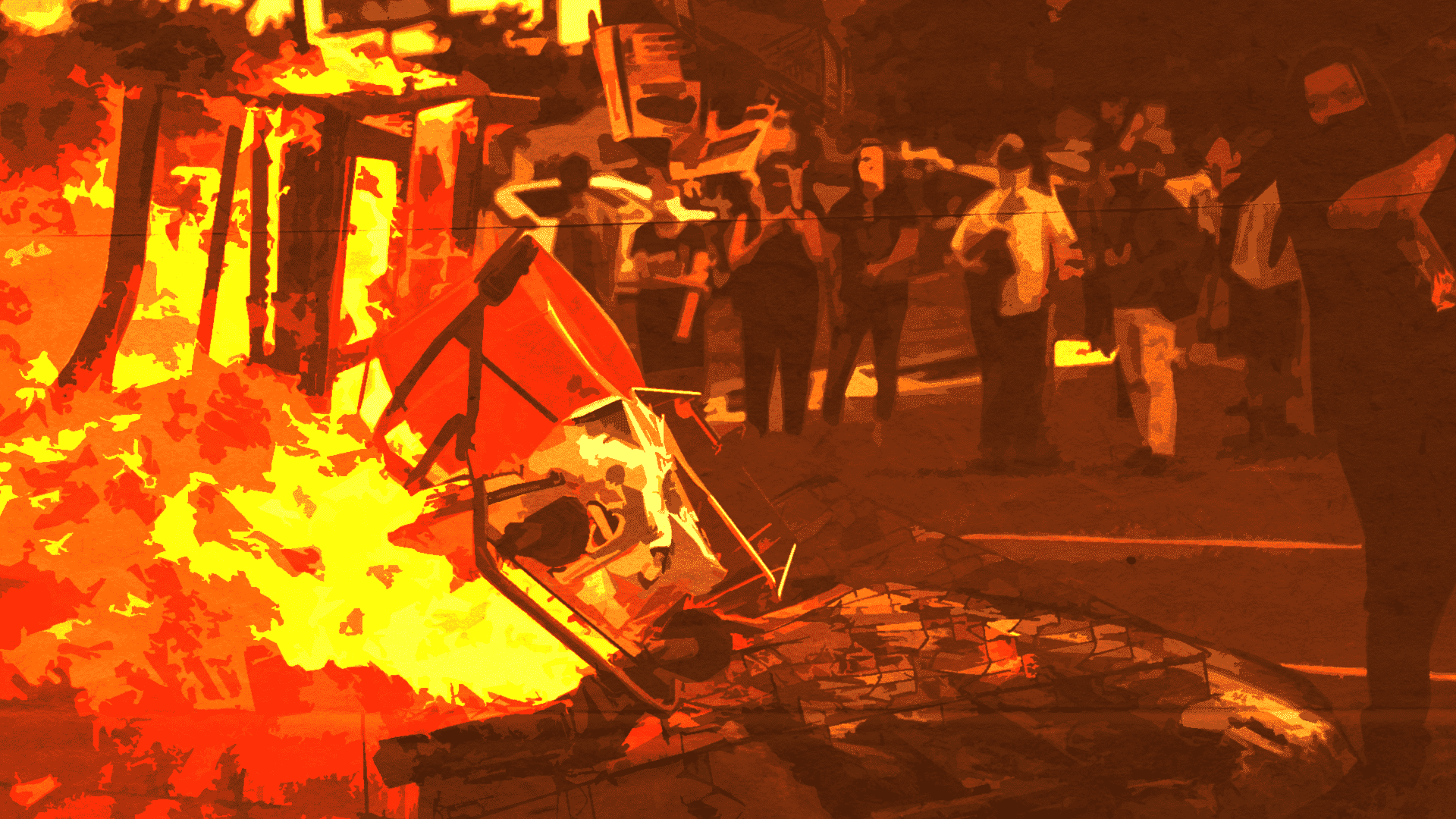 Minneapolis, Minnesota, made the news again last night when a vehicle drove into a group of protesters. Two people were injured; one of them later died at a hospital. Angry demonstrators pulled the driver out and, witnesses said, started hitting him. Officers got to the scene, took the driver into custody, and brought him to a hospital to treat his injuries. "Preliminary investigation indicates that the use of drugs or alcohol by the driver may be a contributing factor in this crash," police said. Minneapolis has become a hot zone, a war zone.

Minneapolis has become a hot zone, a war zone.

On June 4th, U.S. Marshals cornered a fugitive on the top of a parking garage. According to reports, he was approached by members of a law enforcement task force on a warrant for a felon in possession of a firearm. After refusing to comply with officer directions, he "produced a handgun," and was shot. There is no body camera footage of the shooting.

An all-too-familiar scene in post-Trump America followed the shooting: more unrest, more protests, more public vandalism, and arson. The never ending new world as we know it. Nine people were arrested that night on possible charges including suspicion of riot, assault, arson, and damage to property. And the protests haven't let up. Protesters created a road blockade with their cars in the Uptown neighborhood—they were "occupying it," they said—which is where the incident occurred Sunday night.

I live on the edge, in Minneapolis, Minnesota, in the middle of uptown and downtown. And, instead of facing reality, the people of Minneapolis are hiding behind “MINNESOTA NICE” in a hyper-PC/woke culture.

I’m exhausted and nauseous, treading on these grounds for over a year now. Permanently closed businesses next to ugly new high rises that nobody can afford. Crime and violence, even in our best neighborhoods. Drug addicts, prostitutes, beggars, bums—my community has sunk to a low that I would have never imagined. All the while, the culture we live in becomes more and more radical. I am hardened and jaded. I’ve worked hard; I'm an independent woman. I pay all my own bills. Still, my liberal friends don’t fail to remind me of my “white privilege.”

The death of Minneapolis began long before the pandemic, long before the murder of Daunte Wright, long before George Floyd took his last breath under the knee of that dirty cop who murdered him. We’ve been on this trajectory for quite some time now.

Liberal politics are bad for business.

Lisa Bender, president of the Minneapolis City Council since 2018, has been in office since 2014 when she was named chair of the city's Zoning and Planning Committee. During her first term, Bender "led efforts to build more bike lanes, ease parking requirements, ban drive-throughs, boost housing density and design streets that favor bikes and pedestrians as much as they do cars." It made her very popular with the left.

The problem is, Bender and her liberal colleagues, like Mayor Jacob Frey and his predecessor Betsy Hodges, see the world through rose-tinted glasses. In 2015, they decided to redo the downtown Nicollet Mall, made famous by the opening credits on the Mary Tyler Moore show—Mary’s famous hat toss! The $50 million project became a huge drain on city funds, in part because of how political the renovation became. It became a vehicle for graft and corruption, a way for the city's liberal leadership to get their pet projects paid for like $300,000 for bright yellow chairs. Those chairs have become an invitation to the homeless and jobless, who sit comfortably, begging for money as they smoke weed and cigarettes and harassing tourists and working people. In fact, the  Nicollet Mall has become the biggest block party in the country for the people on government aid. The city council keeps having to barricade the sculptures they put up to attract tourists because they turn into homeless encampments. A total joke. Liberal politics are bad for business.

Ironically, it's the wealthy homeowners, the ones that flaunt the signs "BLACK LIVES MATTER" and "ALL ARE WELCOME HERE" signs, who put these people in power. Their powerful voices voted in the liberal politicians who made the decisions last year, when my city got the shit kicked out of it.

For over a year now, under liberal rule, Minneapolis has been beaten; it's ugly; it's boarded-up; it’s burning. Downtown is toast: a combination of COVID-19 and the George Floyd riots and looting. I work in the restaurant business, and many restaurants in the city are now permanently closed. We shall see if and when the others will reopen.

Downtown Minneapolis is a semi-ghost town: boards and more boards cover storefronts, helicopters fly overhead. During the Derek Chauvin trial, the national guard came. Little liberal jerks wrote messages on sidewalks like “GO HOME WE DON'T NEED YOU” and “FUCK THE POLICE.” In front of the graffiti, cop cars are parked on the sidewalk, intermingled with loud groups of people, standing around and intimidating passersby. The beautiful two-story Target building I used to visit while running errands is now taken over by private security and police trying to keep looters at bay. Not very welcoming, right?

Then there's crime and lawlessness. We have daily carjackings and little punks that violently attack people for a purse or a backpack. This happens in broad daylight at lunchtime. I have been robbed of my freedom as I knew it. Out of fear, I stopped carrying a purse or backpack; I learned to carry a fanny pack pouch. I hide it under what I am wearing. My neighbors and I are paralyzed, many unemployed because of the pandemic, afraid to walk to the grocery store at noon. Minneapolis is on pace for near-record homicide numbers.

The violence and the insecure atmosphere is affecting our future—businesses are closing. Again, liberal politics are bad for business.

The cops, meanwhile, have their hands tied behind their backs. Even the good cops seem afraid to rock the boat, refusing to arrest teenagers committing the crimes—opportunists in the pandemic—afraid they’ll look like they’re doing their job. The looney tunes on the city council called for defunding the police, which backfired. The police felt attacked and unappreciated—even though, like in most cities, we have more good ones than bad ones!

City dwellers in neighborhoods like myself have started to rely heavily on apps like NextDoor or Citizen or even Facebook groups to inform us of the crimes and vandalism in our neighborhoods. After reading about it, we walk through our neighborhoods and see the crime with our own eyes.

In a city that desperately needs good cops after we lost many, we have radical politicians missing the mark entirely. Defund the police? It's absurd when crime and violence are skyrocketing! Just recently, ten people were shot—two killed—at a bar downtown. Children have been shot and killed. Because one bad cop murders a person, suddenly, we need to get rid of the police—how ridiculous, how embarrassing it is to live here during this lunacy.

We are not free in Minneapolis. We are prisoners, living in a failed liberal system.