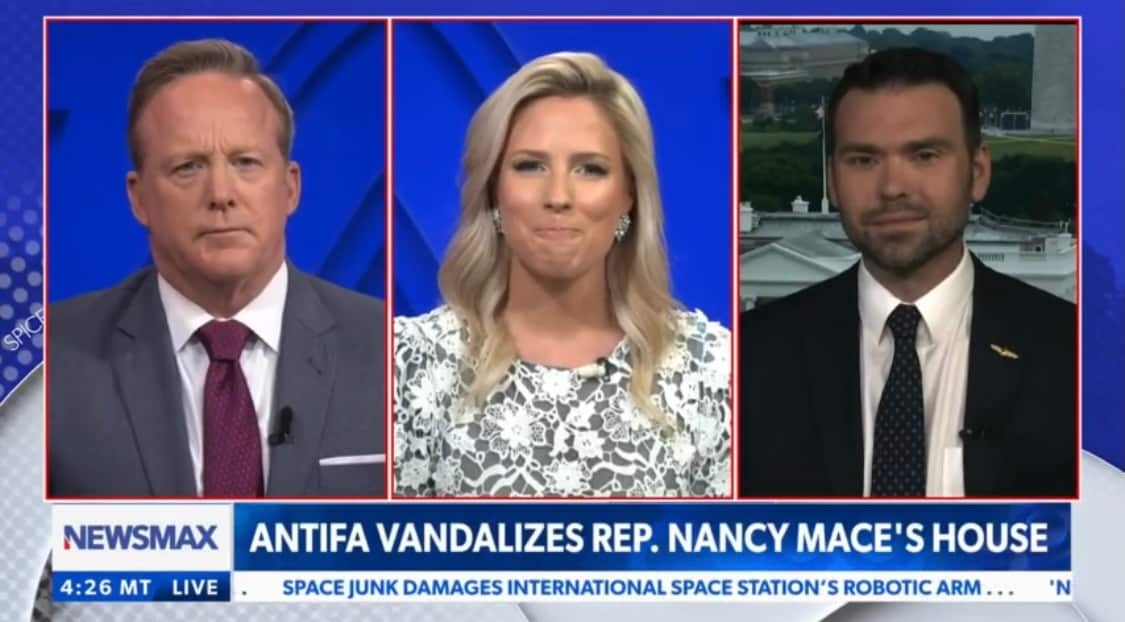 “How terrible is it that here we are one year after the burning of the historic Saint John’s Church there in Washington D.C., just steps away from the White House and of course, President Trump going out with the bible, that we have the same group again adherence to this twisted ideology that are now targeting Nancy Mace and her young children down at her own home. This is the same type of thing that we’ve seen and it’s the reason that I wrote this book and that I’ve been doing this work over the past couple of years because we can’t have this sort of thing going on in our country,” he said.

Posobiec explained that oftentimes, organizations like Antifa start as an idea, which turns into a movement and grows from there.

“We’ve had radical ideologies, both internationally and domestically, in the past and of course that’s the way this always works. It starts with an idea, it turns into a movement, that movement then forms cells at the local level, sometimes regional level,” he said.

“The way we have to go after them is the same way that we would go after any one of these transnational threat organizations and Sean, you know this from your military experience, your time in the White House, I certainly know it from mine, you disrupt them, you go after their finances, you go after their planning cycle, you go after their leaders. There is a set series of methods that our law enforcement and our national security agencies know how to do and are actually quite good at it when they want to and so, you see the FBI going after certain organizations with the full force of the U.S. government, but we actually outline in chapter one of the book conversations that have never before been published between President Trump and FBI Director Wray where President Trump is imploring him...to go after Antifa and Wray is sort of shrugging his shoulders across the Resolute desk and saying, ‘you know, that’s really more of an ideology and that’s not something we investigate, Mr. President.’”

Posobiec also explained where groups like Antifa get their funding.

“We actually go through a very extensive process of the dark money networks that are going into this funding. So, you’ve got money at the higher levels, like people going to the Alliance for Global Justice, they get money from some very mainstream left-wing organizations. We’ve seen, in cases where Project Veritas goes up against Tom Stire talking about funding to refuse fascism. This is all documented in the book, these networks,” he said. “We’re also now seeing many times payment processors, people using CashApp, people using PayPal, and able to use these open source networks where people are now funding their insurgency right there through the internet - the same type of ones that will shut down conservatives, or shut down Christian writers, Christian activists, right, they’ll call them extremists but allow Antifa to get their funding and to conduct their operations using the exact same methods that they’ll shut down a conservative for.”

To buy the book and find out more, click here.