To Tell the Truth: WAPO Has More Than a Couple of Things to Say in Support of Cancelling Dr. Seuss 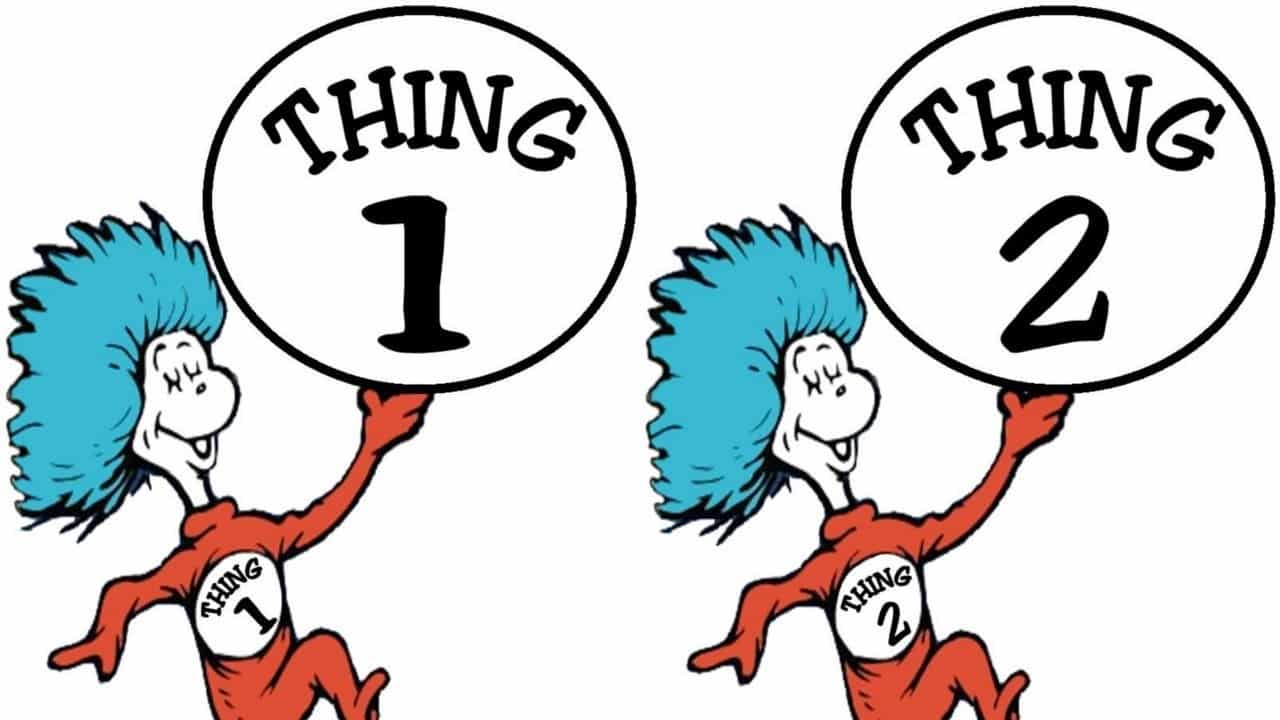 After the company that manages Dr. Seuss' legacy announced that it would halt printing of six books deemed to have "racist" imagery, The Washington Post pounced on the opportunity to shut down natural opposition from the political right as "hysteria" from Republicans who enjoy being angry.

A piece titled "Of course Fox News would rather talk about Dr. Seuss and Mr. Potato Head" criticized Fox News for its focus on the Dr. Seuss books rather than FBI Director Christopher's Wray testimony about the Jan. Capitol Siege.

"What was Fox covering instead? The decision by the estate of children’s book author Dr. Seuss to stop publishing six of his books due to the racist images they included," wrote WaPo correspondent Phillip Bump.

"There’s no reality in which the Dr. Seuss story is more important than the investigation into the Jan. 6 attack and extremist movements in the United States. Even when reframed, as Fox did, into a misleading and inaccurate debate over whether past racism should be excised from the current culture, the imbalance in Fox’s coverage is obvious."

Bump criticized the network for mentioning the Seuss story "more than 60 times."

Ironically enough, The Post itself has been focused on the Seuss story for days -- publishing a remarkable number of analysis and opinion pieces insisting simultaneously that the books in question are "racist" and should be put out of print, and that those concerned about such a thing happening are engaged in "hysteria."

Consider the following headlines published by The Post since Suess' Tuesday birthday:

Opinion: Why Republicans are screeching about Dr. Seuss - Summary: Republicans simply love to make up things to be angry about, and use cultural concerns to deflect attention from "white-supremacist allies"

First, they feed the insatiable need for anger and resentment to fuel the base. Republicans need to fill their supporters with irrational, unchecked fury so as to remain the MAGA cult’s warriors in a forever war against the “left.” There will always be another Dr. Seuss story to fixate on; hence, the fodder for the base never runs out. Moreover, by convincing the base that politics is a cultural floor show, they deflect responsibility for their own inept governance.

Second, Dr. Seuss fulmination sure beats talking about policy issues for which Republicans have no answer or unpopular proposals (e.g., continue to freeze the minimum wage, reject $1,400 stimulus checks). There is nothing to be done about cultural phenomena; hence simply hollering about them serves to establish their political bona fides.

Finally, Republicans take shelter in these empty memes with particular intensity when their own conduct and that of their white-supremacist allies are front and center (as was the case on Tuesday when FBI Director Christopher Wray testified about the role “racially motivated extremists” played in the Jan. 6 violent insurrection).

Opinion: The Great Dr. Seuss Hysteria of 2021 shows how silly and unimaginative adults can be - Summary: Dr. Seuss books aren't even that good. As an adult, I am bored by them. I have other children's books that I personally prefer.

Amid this thicket of dishonest outrage, however, it’s useful to recognize two things that are actually true. First, some Dr. Seuss books for children contain depictions of people of color that, like his cartoons of Japanese people during World War II, are repulsive. Second, insisting that Dr. Seuss books are the alpha and omega of children’s literature shows a tiresome lack of imagination.

As the parent of a toddler, I’ve been recently reacquainted with the Seussian canon: “Green Eggs and Ham” and “Happy Birthday to You!” are in heavy rotation in our home — and their limitations are clear.

The wordplay can be fun, but its cleverness is undercut by Geisel’s penchant for invented words, which is a kind of cheat. Anyone can stick a rhyme scheme or invent a clever rhythm if they don’t confine themselves to the English language. Political fables like “The Lorax” and “Yertle the Turtle” are all well and good, if a little dated in their scolding tone. And the Cat in the Hat, perhaps Seuss’s most famous character, is more frenetic than emotionally engaging.

Were I to assemble a canonical list of children’s-book authors, Dr. Seuss would rank below, say, Peter Spier, the Dutch-American illustrator whose gorgeous picture books were a staple of my childhood and now are vital reading again a generation later.

The time is right to cancel Dr. Seuss’s racist books - Summary: This has been bound to happen. We have been building up to it for a while, and it is a good thing.

After years of earnest efforts to create a more just society, the persistence of racist groups in America — given new energy by the rise of Donald Trump — has made many people realize that more aggressive steps must be taken to counter these attitudes. There’s been a heightened awareness of the way racism is subtly inscribed in our culture, including in our children’s books. Publishers have been trying to undo the damage with titles such as Ibram X. Kendi’s “Antiracist Baby,” Bobbi Kates’s “We’re Different, We’re the Same” and Chana Ginelle Ewing’s “An ABC of Equality.”

But these concerns are not new or — despite mockery from the right — part of some trendy ­cancel-culture hysteria. Langston Hughes criticized Helen Bannerman’s “Little Black Sambo” back in the early 1930s, calling out the best-selling picture book for its demeaning depiction of a Black child.

If curtailing racist imagery in Dr. Seuss is ‘cancel culture,’ what, exactly, is your culture? - Summary: Being upset about the books being put out of print reveals that you are, in fact, racist or resistant to necessary change.

No one is “canceling” Dr. Seuss, a phrasing by now so detached from reality that it doesn’t even make any sense. The author, himself, is dead for one thing, which is about as canceled as a person can get. The vast, vast majority of his books, the ones without racist images or references, will still be sold. If Dr. Seuss’s profile wanes a bit as a result of the attention being paid to his drawings — the only form of “canceling” at play here — to whom is harm being done?

The answer, of course, is people who perceive criticism of the casual racism of the past as criticism of their own behavior or as a reminder of how the world around them is changing. It’s not that some Dr. Seuss books are being taken out of rotation. It’s that Seuss is a benchmark for a particular sort of American upbringing. Calling out Seuss’s — infrequent! — racist imagery is therefore an attack on that view of American identity.

It’s a short hop from here to rhetoric demanding that we make America great again. This, as I’ve written before, was always the value that Donald Trump offered to his supporters: unwinding the clock to a point in which everything was stable and unchanging and systems worked explicitly, if often unwittingly, to the advantage of White men in particular. Challenging Seuss drawings exposes the racism that usually undergirded those advantages.

Opinion: The American right is consumed with its cultural Lost Cause - Summary: Republicans do not use the phrase "cancelling" in a way that I understand or approve of. No laws have been passed banning Dr. Seuss, so everything is fine.

To be clear: There have been no anti-Seuss laws passed, no public campaigns to denounce Dr. Seuss, no boycotts, no books burned or banned, no “canceling,” and no one saying that everyone should stop reading the many Dr. Seuss books that don’t contain racist imagery. It was the decision of a publisher to no longer publish a few books that most people had never heard of, the kind of decision publishers make every day.

But it set off an explosion in the conservative media, egged on by political leaders who have been consumed with the terrifying threat posed by “cancel culture.”

It is unclear what definitions of "public campaigns" or "boycotts" are being used here by The Post. Following Dr. Seuss Enterprises' announcement that it would end printing, many individuals and organizations (including The Washington Post) have publicly supported the decision. eBay has already begun pulling the listings of users attempting to sell copies of the books in question.

A lone Post piece, that did not directly applaud the cancellation of the books, considered how copyright laws could be altered to avoid this problem going forward.

To Tell the Truth: The Washington Post's multiple recent accusations that the political right is somehow obsessed with the Dr. Seuss story (and "cancel culture" itself) seem to be a form of projection.