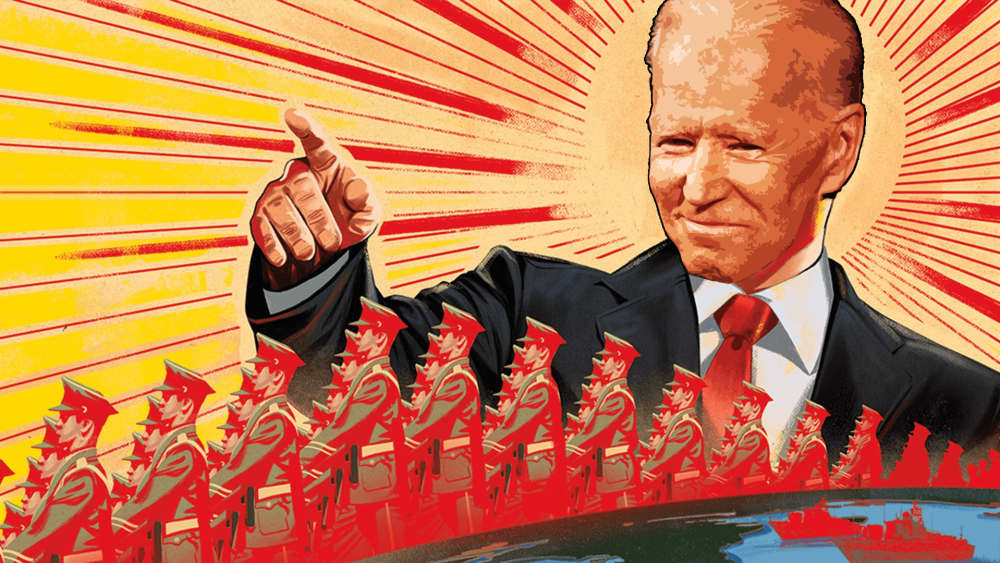 The polls told America Joe Biden would win by 8 points. 10 points! The media used those polls as psychological operations to dispirit Donald Trump’s supporters into believing we were alone, destined to defeat, and had become outcasts in our own country. Those same information warfare tanks were used to crush a key challenge to Joe Biden’s legitimacy: the contents of Hunter Biden’s laptop he had abandoned at a repair shop. The media openly declared that it was a non-story from the start, a waste of time, not even worth discussing—or that it was Russian disinformation. Biden himself said that one.

The so-called mainstream in the media has its own lucrative relationship with Beijing.

This was a huge story. Emails on that laptop provided conclusive proof that Hunter Biden, who will be the First Son if Joe Biden prevails in the presidential election, has a very cozy and very lucrative relationship with CEFC China Energy Co., a Chinese energy company with close ties to the Chinese Communist Party. This evidence reveals how Joe Biden himself makes millions selling his positions and influence to the Chinese through Hunter.

Now, that sounds like an important story worth reporting, right? But good luck finding it anywhere outside of the New York Post and conservative media. The so-called mainstream in the media has its own lucrative relationship with Beijing. The Eurasian Times reports that “The Los Angeles Times, The Seattle Times, The Atlanta Journal-Constitution, The Chicago Tribune, The Houston Chronicle, and The Boston Globe are all listed as clients of China Daily. The Chinese outlet paid the Los Angeles Times $657,523 for printing services, according to the FARA filings.” These outlets join the Washington Post and the Wall Street Journal at the communist feeding trough. Imagine the influence that money buys in a media industry that is always fighting to hold onto their audiences, and are one bad quarter away from mass layoffs like the ones ESPN is doing now.

China Daily is communist China’s number one propaganda outlet worldwide. Owned by the Publicity Department of the Chinese Communist Party, it doesn’t quite own the media outlets named above, but it sure knows how to rent them, buying their silence about China—and, apparently, about Joe Biden.

China Daily is able to gain soft-focus coverage in the U.S, media by publishing its inserts, which look like news stories but are actually communist spin, and paying U.S. media to run them. The communists are using what’s left of the media’s capitalism against it, and more importantly, against the American people who never suspect they’re reading communist agitprop in the Houston Chronicle. According to Freedom House, China has bought and rented media worldwide to broadcast its propaganda—reportedly spending $1.3 billion per year. For his part, Joe Biden wins every time an edition of any paper comes off the presses that don’t mention the river of money flowing his way from China.

President Trump, meanwhile, has spent four years calling China out for this and its other sins and crimes against free and fair speech. He fought and won trade wars against them. He (and to be fair, the Chinese coronavirus pandemic) convinced our allies around the world to move their factories and other investments from China to other, more open countries. When the communists subsumed Hong Kong and destroyed its civil rights, President Trump publicly lambasted them, ending the special trade privileges the communists used to pass cash and investment back and forth.

If he takes the White House in January, Joe Biden will do none of that. Instead, he’s likely to go soft on China as his past comments indicate.

HOW CHINA BUYS INFLUENCE AND SOFT POWER IN AMERICA

Joe Biden has consistently downplayed China and dismissed its intentions and goals. In May of 2019, Biden told supporters that China poses no economic threat to the United States, despite the fact that it has stolen American manufacturing jobs and intellectual property for decades, allowing it to become the world’s second-largest economy.

[E]ven if Russia did spend a few hundred thousand dollars on Facebook ads and trolls during that election, some of it after Election Day, China, through its China Daily media buys, has spent about $19 million to the same effect.

“China is going to eat our lunch? Come on, man. I mean, you know, they’re not bad folks, folks. But guess what? They’re not competition for us,” Biden told the audience in Iowa. Leaders in both parties found his comments appalling.

In September 2020, Biden again went to bat for China, boldly declaring that Russia, not China, is the greatest threat to U.S. elections and politics. As evidence, Biden repeated the discredited lie that Russia colluded with the Trump campaign to steal the 2016 election. "There are a lot of countries around the world I think would be happy to see our elections destabilized. But the one who has worked the hardest, most consistently, and never has let up is Russia," Biden said.

Consider this: even if Russia did spend a few hundred thousand dollars on Facebook ads and trolls during that election, some of it after Election Day, China, through its China Daily media buys, has spent about $19 million to the same effect. Perhaps China’s spending dwarfs Russia’s, because it can afford to and Russia can’t—President Trump’s support for fracking made American energy cheaper and Russia’s less relevant. People like Joe Biden, meanwhile, keep selling American workers out to China. (Then again, Biden has declared his intention to ban fracking, too, so that pattern may not hold for much longer.)

In recent years, China has reached parity with the United States in its foreign aid spending. In 2017, NPR (which has also deep-sixed the facts about Hunter Biden’s corrupt relationship with Beijing) reported that China spent $354.3 billion on its foreign aid “Belt and Road” program from 2000 to 2014. The United States spent $394.6 billion on foreign aid during the same period. No other nation comes close to the U.S. and China in spending on projects and development in foreign countries. But throughout this ongoing cold war,  Biden says they’re no competition for the United States.

Like the U.S. media, China rents Biden to keep his mouth shut.

China’s “Belt and Road” is, in reality, a debt trap. China uses the wealth it generates from being the world’s manufacturing hub to loan money to cash-strapped countries, promising to build much-needed infrastructure, but the fine print reveals the heavy debt burden and unfair terms. Countries that accept Chinese funds find themselves under Beijing’s thumb—and out of the American sphere of influence. China’s financial web is meant to trap smaller countries and pull them into its sphere of influence, blocking America out. This is only good for China, no one else. But, again, you’ll never hear any of this from Joe Biden.

You’ll also never hear anything about the “Thousand Talents Plan” from Joe Biden. According to the U.S. Senate’s 2019 report, through that trillion-dollar plan—yes, trillion dollars—China buys some of America’s top researchers at some of our top universities and labs, so they’ll pass information to jump-start Chinese research in key cutting edge fields. It goes without saying that this research gets weaponized. The yields of this program go to the Chinese People’s Liberation Army. President Trump’s administration was finding these traitors and prosecuting them. Biden will probably bring them into his administration, letting this theft of human and intellectual capital flourish under the new regime.

You’ll never hear Joe Biden address this industrial espionage, or the concentration camps China runs, or the threat it is now posing to its neighbors, including our ally India. Because China owns Joe Biden—as the emails on his son Hunter’s laptop reveal. Like the U.S. media, China rents Biden to keep his mouth shut.

Joe Biden is our first Chinese president. Or at the very least, he’s a wholly-owned subsidiary of China, Inc.