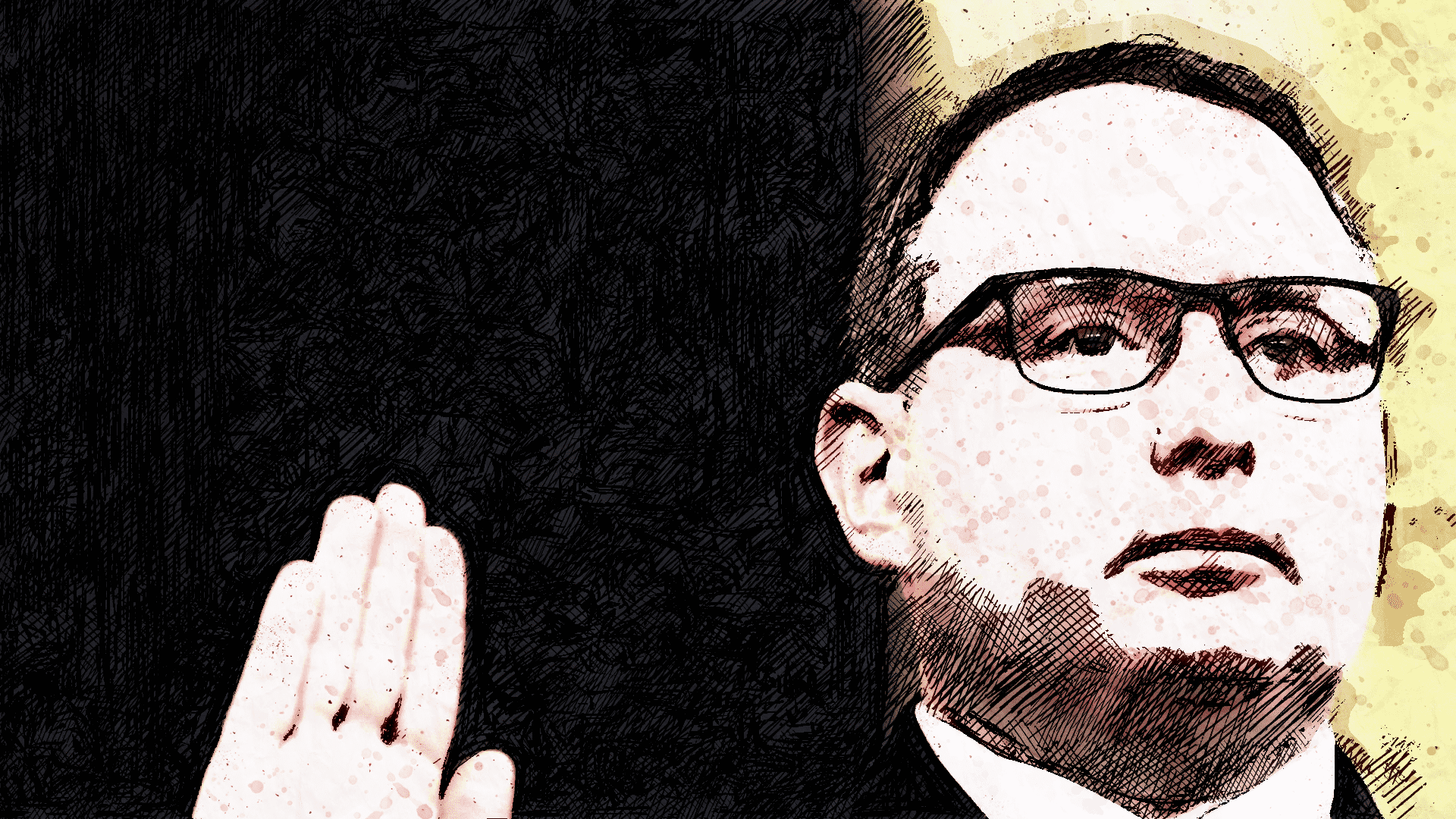 Alexander Vindman, the former U.S. Army lieutenant-colonel who had his five minutes of fame while testifying as a Democratic witness during the impeachment inquiry, has continued to issue warnings about the Trump administration being a clear and present danger to democracy and decency after taking early retirement. In fact, just one day after he retired from the army, Vindman published an op-ed with the Washington Post, writing that “[a]t no point in my career or life have I felt our nation’s values under greater threat and in more peril than at this moment. Our national government during the past few years has been more reminiscent of the authoritarian regime my family fled more than 40 years ago than the country I have devoted my life to serving.”

"Those who choose loyalty to American values and allegiance to the Constitution over devotion to a mendacious president and his enablers are punished."

Vindman (who clearly saw himself as a future Chairman of the Joint Chiefs of Staff) explained that he retired from the military after 21 years after a “campaign of bullying, intimidation and retaliation” from the Trump administration, a campaign which “forever limited the progression" of his desk jockey career into the highest rank. He can barely contain his bitterness. It’s obvious that he equates his failure to impeach Trump with being the victim of a dictator like Joseph Stalin—a man who purged the Soviet military of imagined threats in the 1930s with a determined bloodlust.

"Our citizens are being subjected to the same kinds of attacks tyrants launch against their critics and political opponents," he said of the administration. "Those who choose loyalty to American values and allegiance to the Constitution over devotion to a mendacious president and his enablers are punished."

Vindman’s remarks are indicative of an anti-Trump attitude in the military that permeates the highest echelon of its leadership. It’s an attitude that spurns the President for lacking progressive credentials, while virtually ignoring what Trump has actually done in four years to re-equip the military and to restore its flagging morale.

IN SERVICE OF PARTISANSHIP

As a Democratic witness before the House Intelligence Committee, Vindman was stationed to act as the very embodiment of a patriotic officer, one who would contrast nicely against committee chairman Rep. Adam Schiff (D-CA), a poster boy for towering partisanship and progressive ego.

The President had the portly malcontent escorted off the premises.

But Vindman clearly had an ax to grind throughout the hearing; he certainly couldn’t maintain that he was just an army officer who did “not serve any political party … [but] the nation.” When he voluntarily offered to support an impeachment process that was the most partisan exercise in history—with only one Republican legislator, the RINO Sen. Mitt Romney (R-UT), ever condoning the proceedings—Vindman embraced partisanship.

Vindman’s November 2019 testimony, which centers on the July 25, 2019 telephone call between Trump and Ukrainian President Volodymyr Zelensky, is replete with the mistaken assumption that Vindman has been tasked with deciding what is good for American foreign policy and what is bad. It still hasn’t occurred to Vindman that his counsel may be just as unwelcome and irrelevant today as it was when he was a bureaucrat at the National Security Council (NSC). In fact, his role was to provide advice and to implement whatever policies the President of the United States deemed acceptable. Lieutenant-colonels do not run American foreign policy—and neither do generals. Nor should they.

"I realized that if Ukraine pursued an investigation into the Bidens and Burisma, it would likely be interpreted as a partisan play which would undoubtedly result in Ukraine losing the bipartisan support it has thus far maintained," Vindman said. "This would all undermine U.S. national security,” Vindman said. And he just had to intervene before those silly, democratically elected officials got it all wrong.

To no one’s surprise, Vindman’s job at the NSC ended abruptly after the Senate cleared Trump of any impeachable offenses. The President had the portly malcontent escorted off the premises. He spent the rest of his military career in bitterness over his apparently delayed promotion to full colonel and opted to leave the military that he claimed to love so much in his committee testimony. So much for duty to serve.

Of course, most of us are waiting with bated breath for Vindman to get his payoff from the Democratic Party, or perhaps even a reinstatement and promotion if Joe Biden takes office. “Thanks for ignoring all this nonsense about my boy Hunter and that job he had with Burisma,” Biden could well tell Vindman. “That’s what makes you a real American hero.”

A COMMANDER-IN-CHIEF WHO CARES

But if you think Vindman is some sort of odd exception to the military rule of discipline and duty to serve at the grace of the executive, you would be wrong. Chairman of the Joint Chiefs of Staff, Gen. Mark Milley recently rebuked Trump, saying he had made a “mistake” by joining the President when he marched across Lafayette Square to hold a Bible in front of St. John’s Church in Washington, D.C. Ruled a “photo op” by much of the mainstream media, Milley was in effect saying that the President’s gesture was inflammatory propaganda directed against the same “peaceful protesters” who are rioting across America.

But we should not be surprised if the upper echelons of command sometimes appear to be out of step, not only with their commander-in-chief but with rank and file military personnel.

He could have easily been taking his febrile talking points from Secretary of Defense Mark Esper, who similarly exhibited blatant insubordination by holding a news conference on June 3, 2020, saying he did not agree with the President’s insistence that active duty troops could be used to enforce law and order in America’s crumbling cities. Esper reportedly escaped dismissal by a hair’s breadth.

But we should not be surprised if the upper echelons of command sometimes appear to be out of step, not only with their commander-in-chief but with rank and file military personnel.  Those soldiers are keenly aware of what progressives think the armed forces are, an institution rife with “systemic racism” and “white privilege,” and would reduce our armed services to a constabulary force that might be allowed to fight forest fires—when not actively recruiting more transgendered members, of course. These servicemen and women are also aware that, left to their own devices, military leadership would perpetually embroil the United States in forever wars so they could live out their later careers serving as subject matter experts—needlessly costing lives for career gain.

As Vindman was writing his self-exulting paean, Washington Post columnist Max Boot was already praising the retiring officer for his alleged courage and damning Trump for frequently saying that we should “respect our military” because the “hypocrisy is sickening.”

Which leads us to ask: what exactly has Trump done for the military? Has he shown it respect or dishonor?

The answer is overwhelming and obvious. President Trump has resisted efforts to engage the United States in foreign wars, choosing instead to demonstrate American power in well-publicized and overwhelmingly successful military actions that produce the desired effect without triggering another endless war. The missile strike against Iranian terrorist Gen. Qasem Soleimani, for example, was just such an incident. Instead of expanding our military presence overseas, he has reduced troop levels. He even had the moxie to do so in Germany—a prosperous nation that can well maintain the cost of its own defense in 2020.

President Trump has also insisted that our NATO partners actually pay for their membership in the alliance. No other American President has dared to demand this of our allies, but Trump continues to do so, just recently saying that it was time for Italy and Belgium to pay up. This shift in policy, one that holds our allies responsible instead of overstretching American resources, means sustainable military power for generations to come.

Finally, the defense budget has risen every year under this administration. In 2019, the President approved spending of $738 billion for fiscal year 2020. That money will not only go towards new equipment, but also directly to military personnel in the form of a 3.1% wage hike and paid family leave. The new equipment will include new F-35 Joint Strike Fighter jets, AH-64E attack helicopters, F-18E/F Super Hornet fighters, and developmental funding for the new stealth B-21 bomber. This is not just ad-hoc spending, but a strategic investment in the military. Nor is it just about capital acquisition projects; by providing the tools to their job, military members know that the government is committed not only to the current responsibilities of our armed forces but that these objectives will remain intact in the future.

The list goes on, but it certainly amounts to a healthy degree of respect for our military. President Trump clearly enjoys visiting with the troops and providing them with the credit they deserve for their determined defense of the nation. And, if after all that, he could find little time for a hectoring an NSC appointee who had grown far too big for his military britches, it might be commended, if not just forgiven.