There’s Nothing Racist about Steam. 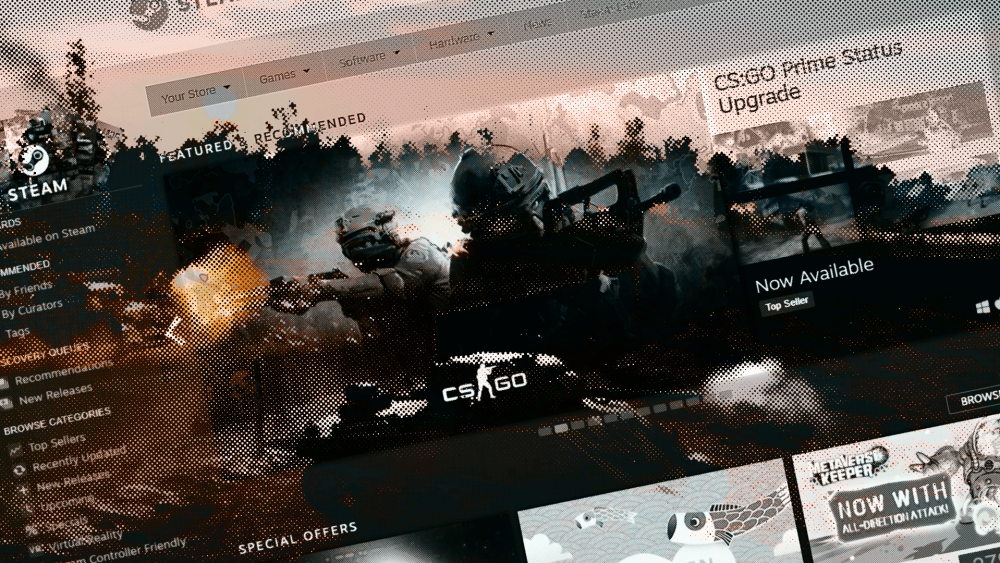 The Anti-Defamation League (ADL) published a report recently claiming that Steam, the world’s most popular platform for video games, is a hotbed of racism. “[T]he Steam platform is among the growing list of virtual spaces where one can encounter extremist activity,” according to the ADL. “It was disturbingly easy for ADL’s researchers to locate Steam users who espouse extremist beliefs, using language associated with white supremacist ideology and subcultures, including key terms, common numeric hate symbols, and acronyms.”

The ADL’s deliberate failure to acknowledge and recognize context stems from a deeper instinct: the organization refuses to see gamers as people.

The report is the culmination of the ADL’s 2019 Gamer Survey, which found that two-thirds of online gamers in the United States experience “severe” harassment. The survey also claims that, “23% of respondents were exposed to extremist white supremacist ideology in online games.”

Remarkably, the ADL’s survey only sampled 1,045 correspondents, a small fraction of Steam’s billion-plus user base; of that, the ADL deliberately oversampled minorities. This survey, which conflates what gamers might refer to as “toxic behavior” (i.e., being yelled at over voice chat and called mean things) with extremism, begins with an agenda: how do we turn the world’s largest gaming platform into a safe space for PC/liberal gaming minorities? How do we gentrify gaming spaces?

The ADL’s deliberate failure to acknowledge and recognize context stems from a deeper instinct: the organization refuses to see gamers as people. This dehumanizing tendency allows them to ignore nuance, social and cultural complexity, norm-governance, and accountability systems that already exist in our communities. To the ADL, gamers are just empty, thoughtless vessels that transmit hateful images, utterly unworthy of consideration.

And that’s why the ADL is coming for Steam—because it’s where the gamers gather.

The ADL has long since taken aim at the gaming community and its icons. Remember back in 2017, when ADL CEO Jonathan Greenblatt condemned Felix Kjellberg (better known as PewDiePie) for making anti-Semitic jokes and holding up signs with hateful language. The ADL’s targeted campaign, co-lead by the Wall Street Journal, took the gesture out of context and plastered it over social media, costing Kjellberg his contract with Disney’s Maker Studios and YouTube.

Through a kind of crude content analysis, ADL “researchers” scour the internet for places that gamers spend time with each other, trying to find “evidence” of racism.

As I’ve previously detailed on Human Events, Kjellberg developed his videos with the intent to showcase the insane things people were willing to do for money—criticizing other content creators, i.e., his peers. But this context was sorely missed by the Wall Street Journal, which turned it into a controversy and argued his videos were part of a broader effort to promote racist views to his audience. Predictably, the ADL’s Greenblatt praised Disney for severing its ties with Kjellberg, claiming that his humor “crosses a line.”

The ADL relishes in seeing gamers fall and going after their income.

This strategy, of taking words, gestures, images, and clips out of context to build a false narrative of gaming writ large, describes the ADL’s research methodology. Through a kind of crude content analysis, ADL “researchers” scour the internet for places that gamers spend time with each other, trying to find “evidence” of racism.

In their survey of Steam, which they themselves admit was a “non-exhaustive, largely random recent search,” they claim to have found “nearly 200 unique Steam accounts that embraced and propagated Nazi and/or white supremacist ideology.” How do they define Nazi ideology? It was evidenced in “their screen names, bio descriptions, profile pictures and comments; others either incorporated into their profiles Nazi imagery such as SS bolts and Nazi totenkopfs, or death’s heads, glorified prominent Nazi figures or fantasized about the 4th Reich.”

In other words, they found a bunch of accounts that follow each other, or used the built-in search engine to search for specific terms (i.e., swastika symbols).

By this logic, you can also call Steam a hub of communists because it’s so easy to find people with hammer and sickle characters or the word “communist” in their profiles. In my own search (“study,” by the ADL’s standards), I was able to find 11,164 users with communist profiles, and another 1,392 with the Russian word for communist - коммунист. 8,025 users had “CCCP” in their names, many of which had commie propaganda in their profiles.

Their classification methodology simply is not sound. The ADL wants us to assert that using this kind of imagery denotes fealty to a genocidal ethnostate. Have … they been on the internet?

Are the people who watch these shows likely to develop racist tendencies? Probably not. But the ADL insists that even the glimpse of a swastika is going to turn you into a Nazi.

Given the preponderance of trolls online—a kind of behavior that motivated the internet’s growth and expansion because, on the internet, unlike at dinner parties or sterile office water coolers, you can troll—the existence of SS imagery on one of the world’s largest platforms comes as no surprise to anyone and everyone who’s ever logged onto any platform … anywhere. Steam is a platform made up of mainly anonymous or pseudonymous, meaning the likelihood of users running into at least a handful of cross-posted memes from 4chan is self-evident.

At one point, the ADL’s report points to games like Wolfenstein 3D and Battlefield as examples of games that have focused on WWII. They claim games with interest in the historical period attract white supremacists—despite the games themselves not being inherently hateful or racist. They want us to believe that even the sight of a Waffen SS symbol could be construed as exposure to white supremacism. You’d get more exposure to racism by watching the History Channel (which, I guess you shouldn’t watch because having an interest in historical periods makes you racist?) or a random sampling of shows on Netflix like Breaking Bad and Sons of Anarchy (both of which prominently feature white supremacist characters throughout their stories).

Are the people who watch these shows likely to develop racist tendencies? Probably not. But the ADL insists that even the glimpse of a swastika is going to turn you into a Nazi.

Had their research been more exhaustive (or empirically sound), they would’ve actually trawled through the player base of historical titles that aren’t first person shooters, like the war games Hearts of Iron IV and Crusader Kings II. But they’d likely paint these users with interest in historical warfare as extremists, too. It’s perhaps for the best that they didn’t; those games and their players don’t deserve to be demonized.

So much of this is common sense to anyone from the gaming world, but somehow beyond the grasp of the ADL.

It’s this refusal to engage the gaming community with any charity that is most galling. Talk to us (more than .000001% of us, at least), understand us, find out where we’re coming from and how we make meaning of these images—don’t just maliciously lurk and surveil our behavior so you can pathologize an entire community.

RECOMMENDATIONS BASED ON UNSOUND ARGUMENTS

The ADL’s ire against Steam relies on four core arguments: “Extremists often use gaming terminology in conversations around violence...”; “The presence of extremists on Steam…”; the references to Steam on “on other extremist sites.”; and Steam’s content moderation policies.

According to the ADL, Brenton Tarrant (the Christchurch mosque shooter), in using a GoPro while carrying out his massacre to broadcast it live on Facebook, “mimics first-person shooter games that simulate real-world weapons-based combat scenes.”

It’s an absurd stretch to blame Steam because someone used a technology that, gasp, lets them record and livestream footage in the first person—that’s what cameras do. How is that any different from the war footage coming out of Afghanistan or Syria, or bodycam videos from law enforcement officers? But blaming the technology, and blaming video games that play out in the first person—as if they were inspirations of these acts of mass violence—is absolutely on par with the ADL’s logic.

In their recommendations, the ADL calls on Steam to create and adopt policies against hate and harassment. Guess what? It’s already got them.

The ADL wants Steam to embrace “anti-hate by design” principles and processes, meaning a shutdown of free speech culture that gamers have thrived on for decades. This would also mean players joking with each other would get banned for posting memes amongst themselves, the way Twitter bans people for calling each other slurs even in jest.

[T]he ADL wants to pathologize and criminalize gamers for their ingroup practices, re-engineer them so their culture resembles a PC culture they find acceptable, and, if they can’t manage to do that, take away the platforms where they gather entirely.

The ADL also wants Steam to take greater responsibility in enforcing its policies using a mix of AI and human moderators. They report that the platform has taken steps to remove extremist elements, including banning neo-Nazi groups and chatrooms. But others, with more cryptic names like the “Varg Vikernes Appreciation Group” and “BOWLGANG” are still on Steam.

Of course, the same, again, can be said of cryptic Facebook pages, Discord chat rooms, etc. Artificial intelligence is not smart enough to detect all of these users, and Steam does not have the human moderation capacity to confront every single instance of racism. And, as they themselves note, if the ADL reported these groups (a reporting function is available), they could get Steam to act against them. (Note, Steam, the ADL admits, removed his account immediately removed Tarrant’s account after the shooting).

These mechanisms exist already. But what’s most telling is that they want Steam to “consult regularly with civil society groups,” including groups like ADL. (This whole thing reads like an extortion grift to get Steam to consult with ADL the way other platforms have).

The ADL’s recommendations are coupled with a veiled threat: they take pains to highlight how much money Steam makes from video game sales, and points out the largest gaming publishers, including 2K Games (Grand Theft Auto, Red Dead Redemption, XCOM) EA Games (Battlefield, Need for Speed, FIFA), Xbox Game Studios (Gears of War, Halo) and Ubisoft (Assassin’s Creed, Just Dance, The Division), who continue to work with Steam despite their aggressive stance against hateful ideologies.

This is a blatant effort to attack Steam’s revenue, forcing these publishers to issue statements against Steam’s questionable efforts to mitigate the spread of extremism or distance themselves from the platform altogether. And, if these publishers don’t, will the ADL come after them next?).

Even though “There’s no strong evidence that Steam attracts or fosters more extremist ideology than any other online platform with a social media aspect,” according to Wired, the ADL wants to pathologize and criminalize gamers for their ingroup practices, re-engineer them so their culture resembles a PC culture they find acceptable, and, if they can’t manage to do that, take away the platforms where they gather entirely.

All their narrow-minded, flawed, and shoddy "research" proves is that the Anti Defamation League, not Steam, is an incubator for extremist beliefs online.