On Heroes and Villains: the True Mrs. America. 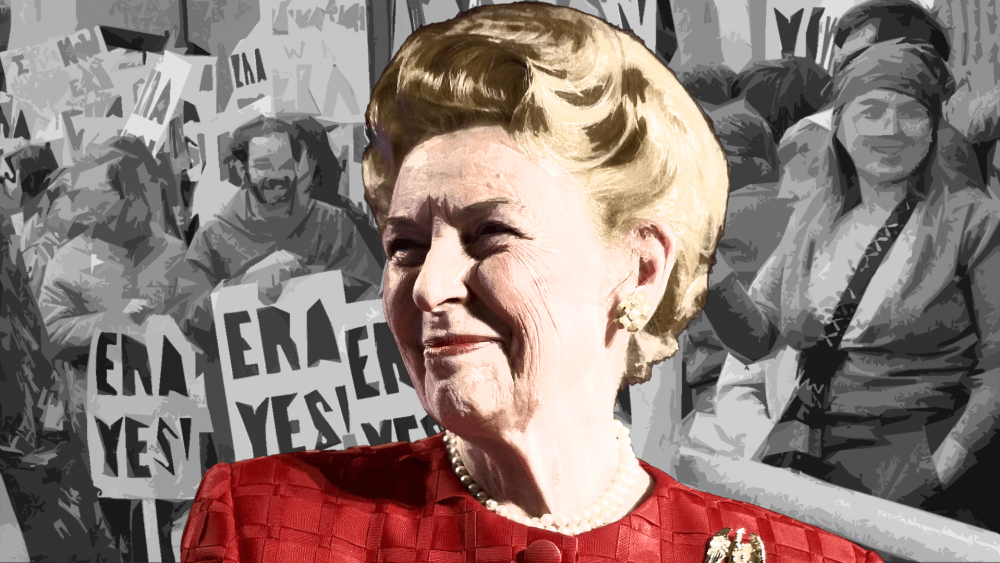 Around this time last year, Helen Andrews, Managing Editor of the Washington Examiner, took to the New York Times, asking: “Where Are the Socially Conservative Women in this Fight?” Her missive began (as one would expect) with Phyllis Schlafly, the grande dame of social conservatism, a woman some second-wave feminists have described as the Antichrist. Schlafly was the brilliant, politically-savvy architect of a grassroots movement to defeat the Equal Rights Amendment—with an army of bread-making housewives.

Schlafly was the brilliant, politically-savvy architect of a grassroots movement to defeat the Equal Rights Amendment—with an army of bread-making housewives.

Of course, we socially conservative women in the trenches of today’s fight (which includes a renewed effort to defeat the ERA) chafed at Andrews’s title. Still, even we had to admit: since she stepped gracefully into the national spotlight in 1972, there have been none like Schlafly.

Her “Schlafly Report” adorned our refrigerators. She inspired our mothers to run for local school boards and City Councils, and her tightly molded bouffant reminded us of our grandmothers. She had six children, a law degree, and multiple books to her credit. She was the single, articulate voice praising stay-at-home-motherhood—a decision that generations of women before us happily made until the women’s liberation movement took to the street to burn their bras, insisting we were living half a life.

Cate Blanchett, who stars as Schlafly, is hard to take seriously when she says she came to the project with fresh eyes. In fact, The New Yorker recently characterized Blanchett’s performance as a take-down of Schlafly: “A good bio-pic performance captures a historical figure, but a transcendent one can effectively destroy her, outdoing the original in our cultural memory. Blanchett’s Schlafly is a pastel nightmare, arch and juicily camp.”

“A good bio-pic performance captures a historical figure, but a transcendent one can effectively destroy her, outdoing the original in our cultural memory. Blanchett’s Schlafly is a pastel nightmare, arch and juicily camp.”

Hollywood is rife with transparent conservative-hatred. And the show’s creator, Dhavi Waller, has built a career working on shows that examine the male/female power struggle (Mad Men, Desperate Housewives). A take-down is precisely what she intended: “If you paint her as a two-dimensional monster, then other women like Phyllis will continue to find success. Don’t we want to understand her appeal so that we’ll have the tools to fight it the next time it comes around?”

That’s likely why the show’s producers, who claim to have done their homework, failed to interview a single one of Schlafly’s six children. Any of them would have told you what the series misses is Schlafly’s warmth and generosity of spirit. "Phyllis was easy to love because she loved you back, genuinely," writes Anne Schlafly Cori, Schlafly's daughter and the current Chairman of Eagle Forum. (To counter Mrs. America’s narrative of her mother as a "power-mad conniver” Cori produced a web archive with memorabilia honoring her mother's legacy).

Of course, none of that is evident in Waller’s rendition, where Schlafly is portrayed as a calculating miscreant, for whom defeating the ERA is merely a vehicle for her political aspirations. As one reviewer at the Los Angeles Times put it, “‘Mrs. America’ suggests that Schlafly opportunistically embraced the cause of defeating the ERA because, as a woman whose great passion had been national defense and the battle against communism, she could advance only so far within the Republican Party.”

Throughout the series, there are blatant personal attacks levied against Schlafly—like the tortuous sex scene in the first episode between Schlafly and her husband Fred. The scene borders on nonconsensual, and sets the viewer up for a systematic take-down of normative middle America: homemaker Schlafly isn’t sexually liberated, a benefit that’s the singular enjoyment of feminists. She’s living in a prison of her own making by choosing the traditional family paradigm. (Donald Critchlow, who authored the biography, Phyllis Schlafly and Grassroots Conservatism, describes the scene as patent fabrication: "I know from looking at Fred Schlafly’s personal papers that he had immense respect for her ... It was one of a partnership, not one of a domineering male patriarchal husband.”).

Later, when local redistricting revitalizes Schlafly's political ambitions, Fred tells Phyllis that he’s indulged her political campaigning for too long. (Schlafly was a twice-unsuccessful candidate for Congress in Illinois). Waller offers the audience a heartbroken Phyllis, who realizes that it’s because he never thought she’d win—and in this way, she is not, and will never be a true change maker, contra her husband. The scene was fraught with narrative license. "[Fred] had immense, immense respect for her intellectually and as a person," says Critchlow, and Schlafly herself described her Congressional runs not as failures, but as "opportunities for learning."

Worse still, the show features blatant accusations of racism. At one point, Freidan goes as far as to claim Schlafly “probably has white sheets in her closet.” (Of course, equating conservatism with racism is a tired trope, one which lazy writers and muck-raking journalists rely upon as much today as ever). “She looks like a barbie doll,” Freidan says, “but she opens her mouth and she sounds like George Wallace.”

There is no evidence that Schlafly was a racist. As Critchlow explains, “Phyllis Schlafly’s files are immense, with great correspondence between state organizers, state activists and Phyllis Schlafly and I did not find an instance of people raising racial issues. Indeed, I found a lot of discussion about reaching out to black churches.” Another biographer, Carol Felsenthal, a staunch liberal and ERA supporter and author of Sweetheart of the Silent Majority, admits in the forward to her book that she tried in earnest to find evidence of racism in an attempt to tarnish Schlafly’s reputation, but there was simply none to be found.

Finally, Schlafly is depicted as villainous in her treachery toward her own sex, especially given her inability to claim power as a woman. During a meeting with Barry Goldwater, she’s asked to take notes in a room full of men—despite being roundly qualified to be there; she’s told by her husband to give up on her failed political campaigns; she’s reminded by that husband that she would never have gotten into Harvard law school because she is a woman.

In this way, she doesn’t address the patriarchy head-on, as her political opponents do. Instead, she manages and perpetuates the problem of chauvinism that is the backdrop for the entire series. Her tolerance for the misbehavior of the men in her life does nothing but provide cover for the feminist crusaders and proof of their argument that women are disadvantaged by having been born female.

But that was not Schlafly’s legacy, nor does it explain her passionate crusade against the ERA. It may well be that feminists give ‘the patriarchy’ too much credit. Far from being its patsy, Schlafly instead re-framed the debate on patriarchy entirely, alternatively emphasizing the freedom homemakers themselves possessed. “The women's liberationist ... is imprisoned by her own negative view of herself and of her place in the world around her,” Schlafly said.

To feminists old and new, it is inconceivable that conservative women might choose for themselves—outside the machinations of patriarchy—the right to stay home with their children, to pause their professional aspirations, and to protect their biological separate-ness.

But our inclination toward domesticity is, as the title of Schlafly’s 1964 book suggests, “a choice, not an echo.”

LIBERAL FEMINISM IN SPLINTERS, THEN AND NOW

Hollywood generally prizes narrative over accuracy; occasionally, whether intentionally or not, they get things right. See, those of us in fly-over country recognize that while leftists may well be younger, hungrier, and sexier, they often lack organization, unification, and a respect for the cultural institutions that have cemented American prosperity. Their inclination toward revolutionary fire-bombing has time and again been their undoing within the halls of power.

“Schlafly has to be regarded as one of the two or three most important Americans of the last half of the twentieth century.”

What Mrs. America makes us privy to is the in-fighting among the second wave feminists: Bella Abzug (co-founder of the National Women's Political Caucus) fights with Shirley Chisholm (the first black woman elected to Congress, and the first black major-party candidate for the White House) for running a sloppy campaign. Chisholm fights with Gloria Steinem (co-founder of Ms. magazine), for sitting on the fence regarding an endorsement at the Convention. Betty Freidan (author of The Feminine Mystique) calls the lesbians seeking an entree into the movement the “lavender menace.” Flo Kennedy creates a splinter group for black feminists because the National Organization for Women “always put[s] gender before color.”

There appear to be too many of them, with too many ideas on banner issues, and too many opinions on how things ought to be run. The modern Women’s March suffered similarly, after it both banned pro-life feminists from participation in the inagural 2017 event, and later, when its leadership failed to condemn Louis Farrakhan’s anti-Semitism. As it was with last century’s feminists, and their modern counterparts, liberal feminism’s insistence on intersectionality is a snake eating its own tail: the Women’s March has seen consistently dwindling numbers since 2017. Moreover, nearly 50 years after the fight for “equal rights” began, a white man in his 70’s emerged as this year’s Democratic Presidential nominee (one who stands accused of sexual harassment, no less).

By contrast, Phyllis Schlafly is a woman alone—even in Mrs. America—and despite all efforts to the contrary, Waller captures the singular, unified success of grassroots conservative politics under strong leadership.

With the support and loyalty of her sister-in-law, Eleanor, one of Eagle Forum’s eventual leaders, Rosemary Thomson, and a selection of composite housewife characters, Phyllis unifies her base with steely-eyed determination and a timely recognition that “The Left is splintering … Too many voices.” Throughout the series, a cool-headed Schlafly uses her prescience, intellect, and unmatched stamina to organize an entirely new type of political campaign.

And, for all its palpable distinctions between the feminists and “anti-feminists,” one scene in Mrs. America is particularly effective in proving Schlafly’s distinction. Housewife Alice Macray, oozing admiration as Schlafly talks about the work she is doing in editing Admiral Chester’s chapters for their book on nuclear strategy, laughs and insists that she has “talked to exactly 4 men in [her] life: father, son, brother, priest.” Schlafly, on the other hand, has straddled the professional/housewife divide adroitly, and the viewer recognizes that, despite being nearly on par with the boys, Schlafly has chosen family over career. (At some point, even Abzug is forced to concede, “[Schlafly] might be the most liberated woman in America.”).

In 2005, liberal commentator Alan Wolfe wrote in The New Republic that, “Schlafly has to be regarded as one of the two or three most important Americans of the last half of the twentieth century.” Most cinematic reviews of Mrs. America, like the those at The Ringer, would have us believe that Mrs. America has effectively relegated Schlafly to the ash heap of history (author Alison Herman writes: “Many of Schlafly’s opponents—Feminine Mystique author Betty Friedan; writer and activist Gloria Steinem; groundbreaking presidential candidate Shirley Chisholm—are now cultural icons, the stuff of sloganeering T-shirts and loving tributes. Schlafly herself is but a footnote.”).

But the modern conservative women’s movement—through its advocacy of the protection of Title IX and sex-segregated sports, the resistance to mandated selective service for women, and its strides to prevent taxpayer funding of abortion—reminds us that the spirit of Phyllis Schlafly has been with us all along.