NEW ORLEANS ??? Sitting in a cavernous Mercedes-Benz Superdome in front of green builders and central planners, billionaire and climate crusader Tom Steyer denounced the pursuit of wealth once people have enough of it.

Easy enough for him to say.

For the next minute or so, Steyer pontificated on the meaning of life and the merits of pursuing healthy family relations and working toward a common good.

Debating the merits of one???s life choices at a posh green conference in one of the nation???s biggest party cities might come easy for the billionaire, who jets around the country pushing his green agenda.

Such a discussion might not be had in homes and apartments of Americans struggling to recover after the Great Recession, everyday people who depend on low heating and fuel costs to survive. Weightier issues, like how to pay the power bill or put food on the table, might prevail.

Yet, Steyer and his climate pals like O???Malley want to make energy more expensive for ordinary Americans. For example, look no further than the Maryland governor, whose aggressive green agenda caused Marylanders??? energy bills to skyrocket.

Or, consider the job losses occurring under the federal Environmental Protection Agency???s strict power-plant regulations announced earlier this year. The United Mine Workers, who endorsed President Barack Obama in 2008 but sat out in 2012, estimates the new rules will cost more than 75,000 jobs by 2020 and 152,000 by 2035.

And those are just the direct jobs ??? miners, rail operators and others. Apply the economic multiplier to the losses and the results could be catastrophic, especially for states heavily dependent on coal production.

???That puts hundreds of thousands more ??? mostly senior citizens living on already-low fixed incomes ??? squarely in the crosshairs of this rule,??? Roberts warned.

Consider, too, the story of North Dakota and its wildly successful oil boom. While progressives and green activities focus on the mega-corporations making billions by lowering the cost of gas and making America less dependent on foreign energy, the micro level is also important.

Dan Wells was a struggling college student at the University of Idaho when he and his wife, Shannel, decided to leave school, risk everything and take a chance in the booming oil fields. Dan Wells earned his truck drivers license and is on his way to a better life.

All thanks to fossil fuels.

North Dakota???s model, hated by greenies, could be a blueprint for the rest of the nation. Watchdog.org???s Rob Port revealed this month that the state boasts about three open jobs for every unemployed person. The state???s unemployment rate is 2.8 percent,lowest in the country.

Even more stunning was the untouched dichotomy for Steyer: While greenies want to make it tougher for Americans to get by, the billionaire made his millions investing in oil and gas.

Call that an inconvenient truth.

While at the helm of Farallon Capital, Steyer, worth an estimated $1.6 billion, invested in foreign oil and gas markets.

Here???s a short summary, courtesy of the Washington Post:

Public records filed with the Securities and Exchange Commission show that Steyer invested in fossil fuels at multiple points over the years, with Farallon buying shares of oil, coal and natural gas firms. Investments included BP and mining companies in the United States and around the world. Farallon???s second-largest holding in September 2012, a month before Steyer announced his departure, was a $220 million investment in the oil-and-gas giant Nexen.

Still, Steyer felt the need to lecture the Greenbuild crowd on seeking wealth.

???So when I see people make those decisions where I felt like they???ve lost the broader purpose in life,??? Steyer said, ???I don???t condemn them, but I feel sorry for them because I feel like they???re missing the most fun parts of life, the most rewarding parts of life.???

In Georgia, a Republican becomes a capitalist punching bag 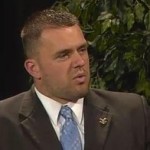