Ignorance of the law is no excuse 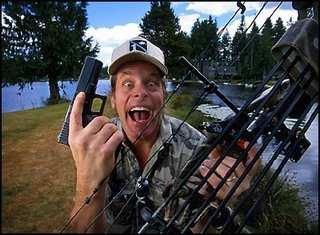 Not a day goes by where an American outdoorsmen doesn't confide in me that due to the increasingly complex, illogical hunting and fishing regulations across the nation, it would not surprise them that they have unintentionally violated a game law at some point in time.

Other outdoorsmen routinely express their frustration about regulations that serve no purpose and cannot possibly be explained in terms of wildlife management.

America is increasingly drowning in just such strange, goofy regulations and requirements. As logic crusader John Stossel recently exposed, our federal government releases roughly 80,000 pages of new regulations each year, confusing, ambiguous, weird illogical regulations that serve no meaningful purpose other than to feebly attempt to justify bureaucracies already off the rails. It's way past bizarre.

The "you don't need to read it, you just need to sign it" health care bill argued before the Supreme Court was almost 2,000 pages long of extraordinarily complex rules and regulations.  Sarcastically, Supreme Court Justice Scalia stated that reading the bill was a violation of the 8th Amendment’s cruel and unusual punishment clause.

Even with an increasing mountain of  confusing and complex hunting and fishing regulations to adhere to, sportsmen have a legal and ethical obligation to know and abide by these regulations, no matter how goofy they may be. I have said this for decades and will continue to do so as we fight to make them sensible.

I have hunted in Alaska for almost 40 years. It is a spectacular, beautiful place that offers incredible big and small game hunting cherished by sporters from around the globe.

In 2009, I returned again with my sons to Alaska to hunt black bear. What I was unaware of is that the specific region where I hunted had a new and unprecedented requirement that a bear hunting tag was considered to be “filled” even with a non-lethal hit on the animal. For sixty years, every "tag" regulation in every state and Canadian province has declared that you tag the animal upon taking possession of the animal.

The first arrow I shot on that hunt was obviously a non-lethal shot where the arrow literally glanced off the animals rib, as seen clearly on stop action video. The bear leapt, stopped, looked around, and slowly ambled off, confused but unhurt by the disruption. After diligent effort by my son and I, we were convinced that this bear was alive and well. We then continued our hunt and ultimately killed a beautiful black bear.

I filmed the entire hunt including the first non-lethal arrow and put it on my television program Spirit of the Wild on Outdoor Channel for tens of millions of viewers to witness.  Airing the hunt on television proves beyond all doubt that I had no willful intention to violate any hunting regulation.

Was I negligent in not knowing the Alaska bear hunting rule for the specific region I hunted that year?  Absolutely.  For my negligence, I have been charged with a violation and I plead guilty. To the best of my knowledge, I am the only person ever charged with violating this new, unheard of law. Lifetime AK hunters, guides, outfitters, even the resident judge at my hearing were unaware of such an unprecedented regulation.

I have promoted the grand, honorable hunting lifestyle all of my life and will continue to do so.  Hunting, fishing and trapping are the epitome of true conservation.

What I also pledge to American outdoorsmen is to work to repeal onerous, unscientific, counterproductive rules and regulations that make no sense such as the seven states where hunting is banned on Sunday, making 50 percent of the season illegal for the average hunting families in those states. Idiotic laws such as these are a hindrance to real conservation and the critical need for recruiting new hunters. Such arbitrary laws serve no scientific purpose that benefits the management of wildlife whatsoever.

The outdoor lifestyle cannot be preserved for future generations of sportsmen by constructing such a labyrinth of confusing, unscientific and oftentimes counterproductive regulations and rules. Reversing this trend is my focus.

While I have never intentionally violated a hunting regulation, ignorance of the law is no excuse, and I am truly sorry, and have paid dearly.  There is even less of an excuse for ignorant laws.

In some cases, it has gotten to the point where kids don’t want to go outside....

The large, unmarked vehicle was spotted backing into the parking space near the entrance of the trend...

WATCH: Jen Psaki Warns that Dems 'Will Lose' if Election Is Referendum on Biden

'If it is a referendum on the president, they will lose and they know that.'...

WATCH: Rand Paul tells Jack Posobiec about his call to investigate Fauci and the origins of Covid

On the origins of Covid, Paul said, "I think by the time we're done with the investigation, and by th...