Emily Gets Her Gun, Part 9

It took weeks of research and dozens of phone calls to finally find a suitable place to take the required gun safety class to register a handgun in the nation’s capital. Thanks to a referral from Atlantic guns, I found Donna Worthy — even though she’s not on the list of certified instructors given out by Metropolitan Police Department. 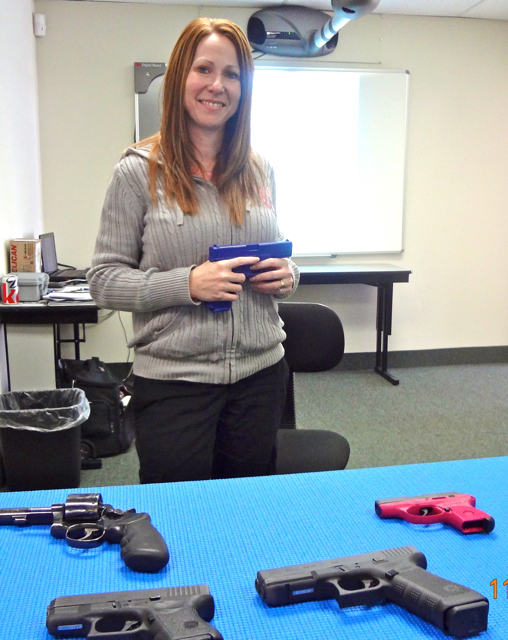 Mrs. Worthy is a retired Baltimore police firearms training instructor. She is now the owner of Worth-A-Shot , which is located in Millersville, Maryland, about a 45 minute drive from Northwest D.C., without traffic. When I pulled up to her office, I immediately liked that it had a bright and clearly marked storefront.

Inside, Mrs. Worthy and two other employees greeted me, wearing uniforms with the company logo.  I’d talked to a lot of possible instructors for this course, and they all taught in their homes and seemingly without any business structure. In contrast, Worth-A-Shot is a real, professional, storefront business. Unlike the option of taking the class in some stranger’s basement, I felt safe.

This safety issue wouldn’t be a concern for most men, but for many women, it feels as if the city forces us into uncomfortable and possibly unsafe environment to take this “safety” class. Clearly,  the D.C. politicians who came up with this half-baked process weren’t concerned about women or their particular needs. Fortunately, Mrs. Worthy’s well-run business addresses these concerns.

Mrs. Worthy led me to her large classroom, with rows of desks and the course lesson on overhead projector. She taught my class herself, but she has a team of male and female instructors for the various classes she offers.

Her specific methodology had been honed through years of teaching. The first thing she asked me was why I wanted the gun. “Self defense,” I told her. She explained that she would tailor the class to my needs, which would be different than someone who was registering a gun for, say, hunting.

It’s noteworthy that D.C. gun class requires everyone to master shooting a handgun, even if you are registering a shotgun. This makes absolutely no sense, but then, what does in this maze of D.C. gun restrictions?

We started with D.C.’s mandatory part, which was reading over the gun ownership rules, restrictions and laws. This same packet of paper was given to me by the registry office, so I don’t know why the city makes the instructors read it out loud and review with me like it’s new, but it does. We went through the packet word-for-word. There are a bunch of convoluted rules that I will need to memorize for the written test the District forces all applicants to take. 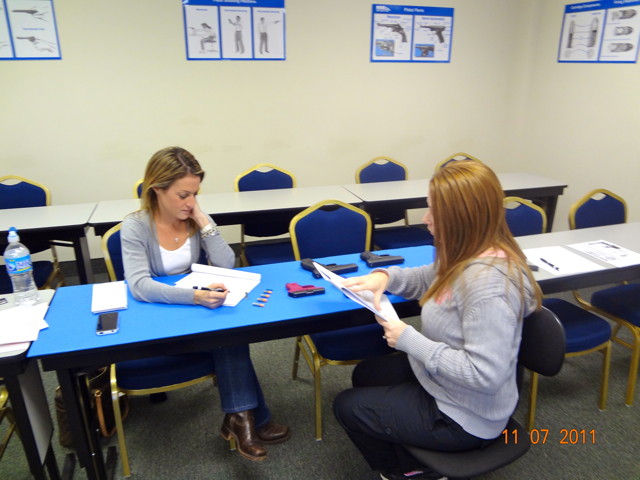 There is just no way to stretch the packet of paper and the simple rules to fill the required four hours. I’m quite sure that most instructors sign the forms and let you off with less time. Mrs. Worthy makes up the extra time by throwing in her basic firearms fundamental course, which she normally charges for $100 in the class and $100 at the range. She charged me $225 for the D.C. course ($150 if I waited for a group class). I learned a lot from this bonus lesson.

After the paper work, Mrs. Worthy turned to the required fundamentals. She had five guns lined up on the table – a Glock 17 9mm, a plastic model of the Glock 17, a Glock 26 9mm, an old Smith and Wesson 38 caliber revolver and her own pink concealed carry weapon – a Ruger LCP in 380 caliber. She pointed out that her guns did not have the D.C.-mandated, ten-round limit on the magazine, as mine must have.

First she taught me how to load and unload the gun. She corrected me repeatedly when I picked up the magazine off the floor after releasing it from the gun. “What you are trained to do is what you will do under a high-stress situation,” she said. “We’ve had police officers on duty who stopped to pick up their shell casings because that was their habit from the range. You just have to let the mag drop.”

She taught me to rack the slide three times to make sure there was no bullet in the chamber. (The second time is to make sure a second bullet isn’t stuck on the side. The third time is in case you mistook a bullet flying out.)

I’d already mastered the basics from my editor’s lesson, so the new things I learned from her included loading the gun while holding it upright in front of me. “No one can see if the slide is open from in front of you. So if you’re caught with an unloaded gun, the bad guy doesn’t know it until you have loaded,” she explained.