On July 1, 2011, the Chinese Communist Party (CCP) celebrated its 90th birthday.  It was a big deal over in China, with lots of Party-sponsored films and parades.  The event was not widely celebrated in the United States, with one notable exception: General Motors.

The CCP’s state-run China Film Group produced a big-budget propaganda film called “The Birth of a Party,” or depending on how the title is translated, “The Great Achievement of Founding the Party.”  The latter sounds more like what they were shooting for.  The “chief business partner” in this venture was General Motors brand Cadillac, a development that did not please watchdog website China Auto Web:

According to an announcement posted on Shanghai GM’s official web site yesterday, whose title reads “joining hands with China Film Group, Cadillac whole-heartedly supports the making of the Birth of a Party” (sorry if this makes you puke), the filming team and stars will be riding the Cadillac SLS, marketed as a luxury executive saloon. To show that Cadillac, whose sales in China have been rocketing, is a best friend of the rich, powerful, and famous here, what’s better than whoring it to the CCP?

As the CCP marries totalitarianism with capitalism and fools the people with entertainment, only the “politically correct” or stupid–or those who pretend to be so–can get rich. And GM seems to know this very well. While Audi, Mercedes-Benz, BMW, and Volvo have all rushed to please China’s rich and powerful through physical enlargement (offering models of extended wheelbases), Cadillac gratifies the party orally, singing praises through a film.

(Emphasis mine.  Puke theirs, but I’m not going to deny that I’m feeling a little queasy.)  General Motors denied that its American home offices had anything to do with the Chinese Communist propaganda film, as reported by the Daily Caller:

According to Greg Martin, director of policy and Washington communications for GM, the automotive company played no role in the film celebrating the 90th anniversary of the Chinese Communist Party (CCP).

“It was not GM,” Martin flatly told The Daily Caller.

The sponsor, Shanghai GM, said Martin, is a distribution and sales network that “is a completely separate and distinct business entity based in China that has no organizational or financial ties whatsoever” to the Detroit-based company.

“It is not GM. It is not GM money. And it is in no shape or form, or indirectly, taxpayer money,” Martin told TheDC.

He confirmed that no GM vehicles appear in the film, though some of the actors were transported in Cadillacs.

I wonder if the Chinese people were made aware of the fine nuances of General Motors’ overseas business structure during the aggressive advertising campaign for the film.  Maybe the Cadillacs lugging the movie stars around had bumper stickers that proclaimed them completely unaffiliated with the American offices of General Motors in every way.

Also, I don’t know if anyone was really concerned about GM vehicles showing up in a film set in 1921 China, but it’s nice to get that off the table.

The China Film Group is very loyal to the Party – they pulled out of a 2010 film festival because it was going to screen a documentary about Tibetan independence, for example – but they don’t just churn out locally-produced propaganda films for the Chinese home market.  For example, back in April, they had a production crew shooting on location in California, along the fabled Route 66, with actress Karen Mok.  She’s a big star, having appeared in movies with Jet Li and Jackie Chan, plus the marvelous Stephen Chow film Shaolin Soccer (which Chow followed up with the even funnier Kung Fu Hustle.)  Chow doesn’t just do comedies, though – he was in The Founding of a Republic, China Film Group’s predecessor to Birth of a Party.

You can see the short movie China Film Group made near Los Angeles here.  It’s a Cadillac commercial.  Presented by “Cadillac Film Group.”  It ends with the Cadillac logo and an English voice-over.  It makes that ten-foot-pole separating GM from the China Film Group look awfully flimsy. 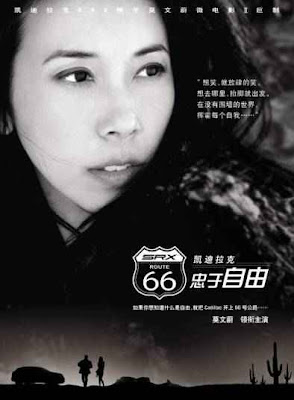 The CEO of General Motors, Dan Akerson, misses no opportunity to distance himself from the Chinese communists, by saying stuff like this: “Whoever comes after me; it’s going to be a more important appointment than mine because he or she will have to carry on a cultural revolution here. It’s just like the Communist Party in China in the 1960s, there has to be a cultural revolution here.”  He probably grits his teeth in barely-concealed disgust all the way through conference calls to Shanghai GM.

Happy birthday, Chinese Communist Party!  Here’s to another great 90 years from your friends at taxpayer-financed, U.S.-government owned General Motors, which is a totally separate entity from Shanghai GM and has absolutely nothing to do with anything they produce, and doesn’t even really like communists all that much, but still hopes the China Film Group enjoyed their stay in California, and trusts that you will remind your domestic audience at every opportunity that American GM isn’t a partner of the Chinese Communist Party like the completely independent Shanghai GM is!