Requiem for a Tax Cheat

Democrat tax cheat Charles Rangel was  stripped of his chairmanship of the House Ways and Means Committe in 2010 and censured by the House of Representatives, bringing permanent disgrace upon himself and his legacy. Normally people like this would be shunned, and would have resigned if they had any dignity.

Instead today Rangel will be honored in the House by having his portrait unveiled on Capitol Hill.

He may have been censured by his House colleagues, but Rep. Charles Rangel (D-N.Y.) will have his visage permanently displayed on Capitol Hill.

The House Ways and Means Committee, which Rangel chaired until he lost his gavel following accusations of ethics violations, is hosting a ceremony and reception Thursday to unveil Rangel’s official portrait in Longworth House Office Building.

The ceremony comes less than a year after the full House voted 333-79 in a public rebuke after Rangel was found guilty by a House ethics panel of 11 counts of ethics violations. Allegations included charges that he improperly solicited money from corporate officials and lobbyists for the Charles B. Rangel Center for Public Service at City College of New York, did not disclose hundreds of thousands of dollars of income, kept a rent-stabilized apartment in New York as a campaign office, and did not pay income taxes on a villa in the Dominican Republic.

Speaker Boehner should have come up with an excuse to be outside of Washington today.

Laying passed out on the beach outside his villa is how Rangel should be remembered. 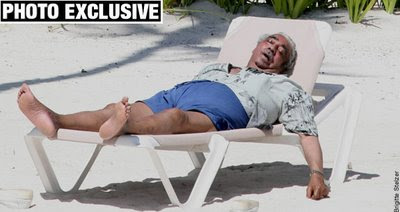 The Most Important Man In America