How Obama Spent His Summer Vacation

Barack Obama’s misadventures in Martha’s Vineyard are some of the stranger unforced public-relations errors in recent memory.  Spending a fortune to jet off to a fabled playground of the rich, while the country suffers from his recessionary economic policies, was a bizarre slap in the face to an electorate that has already come to view this President as arrogant and out-of-touch.  “Optics” matter.  Camp David is a nice vacation spot, too.

Naturally, Obama played a lot of golf on vacation.  Part of the problem with skipping off to the golf course so frequently is that when he plays a lot of golf on vacation, he gets heat for it.  Upon learning that Obama “played the trifecta” by hitting all three of the big golf courses in Martha’s Vineyard, Downgrade America finds itself wondering how much that costs.

The snarky White House response of asking about Speaker John Boehner’s handicap was a disaster.  It’s childish, it keeps people talking about the President’s incessant putting, it diminishes the stature of an office we like to think of as uniquely important, and it puts Obama in the middle of a very large glass house with stones in his hands.

Developments in Obama’s Libyan war didn’t cut his vacation short, and the Great D.C. Quake didn’t even pull him off the links.  The latter incident is a relatively minor criticism – nothing happening in post-apocalypse D.C. required him to scoot off to a command post – but it looks really bad in context.  Repeated images of Obama’s disengagement produce the kind of “optics” that play on an IMAX screen.

The media launched a desperate effort to describe the Martha’s Vineyard misadventure as a “working vacation.”  They’ve even tried congratulating him for “working in golf during his working vacation.”  Photos of him looking serious while meeting with aides and taking phone calls proliferated.  Try Googling the phrase “Obama working vacation” to get an idea of how earnest this effort at image control has been.

Speaking of earnest, White House spokesman John Earnest tried to wave off criticism of the Obama vacation as “cable chatter,” saying the President knows “this is a job that he’s responsible for doing wherever he is, whether he’s sitting in the Oval office, or whether he’s caught on the golf course when an emerging action takes place.”

One of the problems with this defense is that Americans see the current economic crisis as unique, a view the Obama Administration has strongly encouraged.  I would imagine the increasingly disenchanted public remembers all those loud promises that the President “will not rest” until “everyone looking for a job can find one,” especially since they were made as recently as two weeks ago.

Unique challenges call for remarkable leadership and sacrifice, not scheduled vacation romps… much less a President who never seems to do anything except show himself a good time, and raise funds for his re-election campaign.  He’s spent plenty of time hanging around with deep-pockets supporters during this “working vacation.”

Now the President is getting some flack for the possibility that he’ll go home early to avoid Hurricane Irene.  It would be damned silly for the POTUS to sit there and get pummeled.  A massive hurricane is a perfectly good reason to end the vacation early.  The problem is that people keep thinking about all the perfectly good reasons he shouldn’t have gone in the first place.

As the vacation wraps up with tales of First Lady Michelle Obama’s “disgusting” spending sprees – said total over $10 million of taxpayer money over the past year – and reports that some residents of Martha’s Vineyard will be glad to see the Obamas go, you have to wonder how the White House political team failed to realize how awful all of this would look.  Who thought it would be a good idea to cram the huge presidential entourage onto a small island, at massive taxpayer expense, in the middle of a seemingly endless recession?  Is Obama basically daring his last few dead-end supporters to abandon him?

Someone at Martha’s Vineyard took that dare, and put up a sign on the route most often traveled by the presidential motorcade: 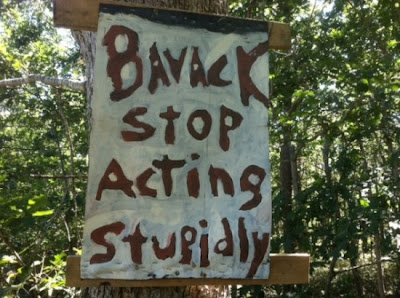 Off The Cuff Episode #7: Steven Greenhut