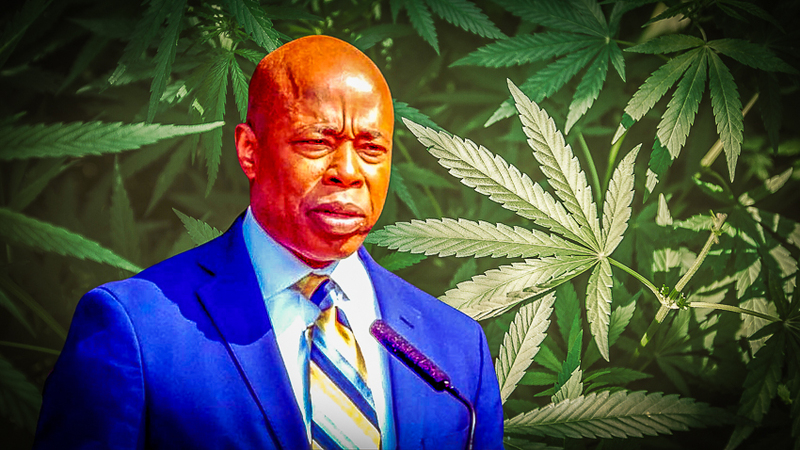 adams
On the Sidewalks of New York is a weekly feature at Human Events wherein Jacqueline Toboroff, a native New Yorker, will share her observations and candid commentary on the goings-on in our nation’s largest city. Wherever you live, and whatever you feel, there is no escaping the fact that New York City matters.

Newly elected Vickie Paladino, Republican City Council representative of District 19, is one of the few New York City elected officials taking the threat of the prolific smoke shops gearing up to sell weed seriously. She has both successfully helped to close an illegal operation and has put in a legislative request at City Hall that’s now “stuck” in the pipeline. “It could take months to determine when it will be introduced,” she says, but it will be heard.

Paladino has seen District 19, spanning Northeast Queens, including Whitestone, College Point, Bayside, Little Neck, Douglaston, and parts of North Flushing, become unrecognizable. The once “stroller neighborhood” is now plagued with a crime spike, and the smoke shops are exacerbating the problem.

“In just one part of my area, there are 25 smoke shops. They attract crime. Last week, one of the four on Bell Boulevard, (there’s a fifth one slated to open) had two separate occurrences of armed robberies”, says Paladino. Who could have ever guessed that the smoke shops become drug dens that invite criminal enterprise - just about everyone above amoeba intellect. The NYPD’s 109th Precinct, which covers Whitestone, Flushing, and Bay Terrace, has dealt with a crime spike of 93% between 2021 to 2022. The situation is such that lawmakers in Bayside are calling for the establishment of a new Northeast Queens NYPD precinct in light of an "alarming" rise in crime.

As part of her job, Paladino works with the narcotics bureau. In one encounter, she says, “I was walking around College Point Boulevard, teeming with stores, restaurants, and yes, schools nearby. I saw a slovenly man seated like a potted plant in a lawn chair outside the smoke shop, right on the sidewalk, smoking a joint. It was 11am. I asked him what he was doing and he said, ‘it’s legal.’ I went into the store, voiced my concerns, and knew something was amiss.”

On January 11, the 109th precinct executed a search warrant inside 18-35 College Point Boulevard in regard to illegal sales of cannabis and controlled substances. Recovered were cannabis and psychedelic mushrooms. Two perpetrators were arrested. “However, the victory was short-lived; next day, the smoke shop was up and running,” says Paladino.

The problem is, the NYPD is strapped. The City Council and Mayor de Blasio defunded and demoralized the department, and Mayor Adams has only made matters worse. Proof, “graduating classes of cadets used to be approximately 3000 strong. In 2023, the new class has only 400 ready to serve and sacrifice. We have also lost close to 4000 officers who have gone into early retirement or relocated to work elsewhere”, says Paladino. “Why can’t we close more smoke shops? There isn’t enough manpower”, she says. Remember this as Mayor Adams says, “basic services will be cut” - but not our taxes - to fund the illegals he is welcoming in with concierge service and plying with luxury items like $400 dollar a night midtown Manhattan hotel accommodations and cell phones.

The crime is bad enough on its own, but the smoke shops selling weed illegally make it worse. They’re a step on the slippery slope of the breakdown of civil society.  They target kids like predators, who have been made schizophrenic from two years of missing school and cultural warfare meant to cripple their survival instincts. Luring in the youth with teddy bears, colorful anime, and candy, smoke shops are designed to look simultaneously cool and innocent, a tactic apparently borrowed from pedophiles. The ubiquitous nature of their presence in family-friendly areas normalizes drug use, drug dealers and anesthetizes the public to skyrocketing crime. It’s a psychological campaign to brainwash undeveloped minds, get them hooked on drugs, and then likely, hooked on government assistance, expanding cubicle people.

Paladino says even the language the elected officials and unelected bureaucrats use to destigmatize drugs is alarming. “Weed and pot is what everyone under the sun refers to as what has now been rebranded as ‘cannabis’”, she says. It’s a campaign to remove preconceived notions of the slacker-like Cheech and Chong mentality perpetual users have garnered. It is also to legitimize convicts arrested on drug charges, first in line to receive the licenses. “The City issued 36 licenses - all of them to convicted felons with drug-related felonies”, says Paladino.

The legislative request Paladino submitted calls for regulation of the sale of pot, synthetic marijuana, edibles in the shape of kid favorite gummy bears, and glass paraphernalia. It seeks to prohibit childlike marketing. Finally, it looks to end the 24/7 open hours of operation hampering good quality of life.

Just yesterday, on January 18, Paladino was at City Hall to listen to the other representatives hold an open meeting “on how to make smoke shops safe.” It’s an election year, and many of the other council members that are pro heroin injection sites and legalizing pot are feeling the heat from their constituents”, she says.

Like clockwork, Democrat City Council member Julie Menin incredulously tweeted, “Today attended @NYCCouncil hearing on unlicensed smoke shops. These products are marketed to kids w/ cartoon characters & have harmful chemicals. When I was @helloDCWP Commish, we did a major public awareness campaign warning of dangers to kids. City needs to do PSA campaign!”

The very same Julie Menin was cited on April 22, 2022 as saying this; “Mayor Adams’ Cannabis NYC initiative is a step towards restorative justice as the city is investing in marginalized communities that have been disproportionately affected by punitive marijuana laws,” said New York City Councilmember Julie Menin, chair, Committee on Small Business. “These services in New York City provide opportunities in an upcoming industry by taking an equitable approach that uplifts individuals and the families of those who have been affected by former marijuana convictions.”

By this logic, Menin should put out a statement in support of springing thieves from prison. She can lend her voice to removing the usual and gratuitous red tape small business owners face from the city and give the convicts preferential treatment to owning a store.

Paladino says, “tolerance is another word that has been weaponized to bully those into silence that push back against fringe elements wanting to subvert New York City taxpayers and go after the most innocent of all; children.” Her call to action is to speak up and reach out to fellow parents and grandparents. Go into the smoke shops selling weed and paraphernalia and ask to see a valid license. Write into your City Council representative citing concerns. “These establishments aren’t supposed to be within 1000 feet of places of worship and schools”, says Paladino. Yet, smoke shops are mushrooming and City Council members like Menin are talking out of both ends.