The J6 Insurrection Fable is the Democrats' Big Lie 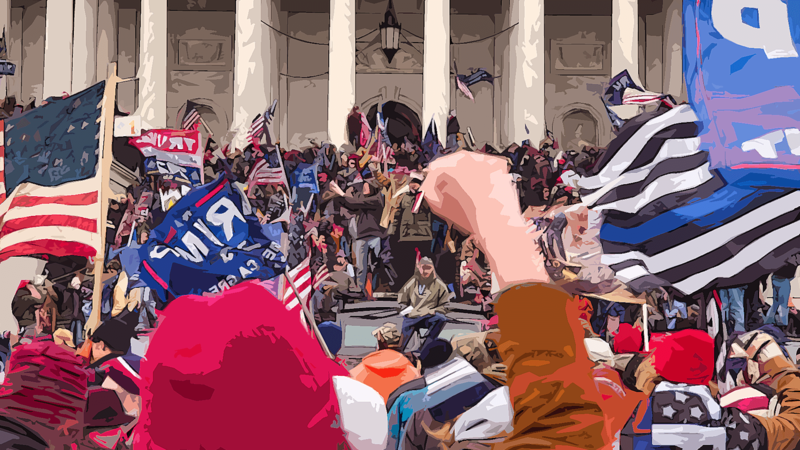 The Biden Justice Department Can’t Seem To Produce the Evidence It Supposedly Used To Indict the January 6th Protest Cases. by Human Events
President Joe Biden and the Democratic Party may be the first administration to enshrine power in a mythological insurrection by their opponents.

There was an embarrassing riot on Capitol Hill on Jan. 6, 2022. It did not go well for anyone. But if anyone wants to call it an insurrection, go ahead but you had better start calling every gang rumble that occurs in Washington, the same thing because the Jan. 6 riot was the most poorly planned and executed insurrection in political history.

But the Jan. 6 fiasco has become the defining moment for the Democrats, smearing former President Trump, his supporters and increasingly all Republicans as a visceral danger to democracy and unworthy of forming government because they were responsible for an event that Vice President Kamala has said is comparable to the Japanese attack on Pearl Harbor and 9/11.
Democrats have skillfully but mendaciously molded a relatively insignificant event into their most pertinent reason for arguing that Americans should not vote for Republicans.

Biden and the Democrats have taken a mindless exercise of political mayhem that was cultivated and encouraged by the FBI into the kind of history-making event that authoritarian regimes usually invent about themselves. Like those other events, Jan. 6 is so enshrouded with obfuscation and sleight of hand that the lies just keep getting larger and more outrageous.

On the second anniversary of the "insurrection,” the number of police officers allegedly killed in the riot has climbed to five. Speaking on Friday about the event, Biden said “These people and the people representing those who couldn't be here because they gave their lives for this did, is incredibly consequential. That's not political talk. That's historical fact.”

That’s a lie. The only person to die in the Capitol Hill riot was a 14-year United States Air Force veteran, Ashli Babbitt. She was shot by Capitol police officer Lt. Michael Byrd and she later died of her injuries. Byrd’s previous claim to notoriety was his leaving his gun in the men’s room at Capitol Hill.

But it’s one thing to lie about what happened on Jan. 6 but quite another to make that day a defining day for America’s democracy.

Other regimes have reimagined their revolutions and lied about their own insurrections but I can’t think of another – and certainly not in the democratic world -- that has concocted such a story about their political opponents.

The Soviet Union created a false narrative about the October Revolution of 1917 and the occupation of Czar Nicholas’ Winter Palace. Although the Bolsheviks took advantage of a power vacuum in then-Petrograd and virtually walked into the palace unopposed, Bolshevik leader Vladmir Lenin enshrined the moment in a completely fictitious filmed reenactment from 1920 that claimed hundreds of communists were killed taking the Russian summer capitol. That lie became an integral part of Soviet history and the communist mythology that surrounded it. The Soviets repeated the lie so often that it eventually became part of the official record and few people in the West refuted the story.

The Nazis had their Beer Hall Putsch, a failed coup d'état by Adolf Hitler against the Bavarian government that was supposed to expand to a march on Berlin and the assumption of power. Nothing worked out for the Nazis that night, that didn’t stop the Nazis from using this comedy of errors as a source of propaganda, and another Big Lie.

There is a similar kind of misleading going on with the Democratic version of Jan. 6. Are they not promulgating fabled heroes and villains? They ran a series of ridiculous committee meetings around the riot. These hearings were more than vaguely reminiscent of the Stalinist show trials of the 1930s where enemies of the state were paraded in front of the cameras and forced to confess to outrageous charges of treason and sabotage.

The real legacy of Jan. 6 is that the investigation into this brouhaha has become the largest in the history of the FBI. Hundreds, perhaps thousands, of protestors remain in jail for participating in an imagined insurrection that was most certainly partially engineered by the FBI itself. Talk about job creation.

America’s once-vaunted national police force and the Department of Justice have become dangerously politicized institutions that seek out, harass and prosecute opponents of the Biden regime.

The lies of Jan. 6 are becoming more entrenched two years later because we have a president who either cannot or will not differentiate between history and falsehood; between the facts and virulent political propaganda.

When the new Republican-controlled House starts its broad inquiry into the FBI and other security agencies, it needs to establish some accuracy into the recounting of Jan. 6, which must be presented as an unfortunate day that has been ignominiously and ludicrously transformed into an utterly exaggerated moment of political terror.

The Biden Justice Department Can’t Seem To Produce the Evidence It Supposedly Used To Indict the January 6th Protest Cases. by Human Events