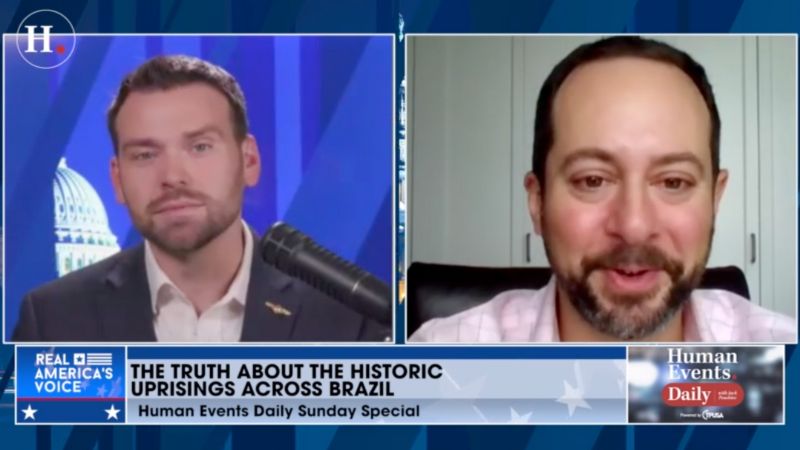 Posobiec opened by noting how when he was in Mexico City for Human Events, he saw celebrations for Lula and said, "It ain't like in the US where they've just got the Antifa flags. They've got full on hammer and sickle red flags, and what they're chanting is 'Viva Lula, Viva Lula'," and later added, "The communists are out in full force for him."

"You know when people tell you who they are, believe them," Tyrmand said. "Lula and his party, it's not coincidental that their symbology and their colors are bright red, five pointed stars. It looks like the Marxism, the political Marxism of the 20th century which the Soviets were pushing all over the world now we know it's a Chinese pushing this and they also five pointed stars."


Lula da Silva, of Brazil's Workers Party, won 50.83 percent of the vote compared to incumbent Jair Bolsonaro, who won 49.17, in the country's October 2 vote. There was a runoff election afterwards on October 30 which Lula da Silva won and that win was immediately ratified by the Superior Electoral Court, which Posobiec had previously noted are leftist in Brazil.

Tyrmand explained some history, going back to 1990 when Lula da Silva formed the Sao Paulo Forum.

"The Sao Paulo Forum is where Chavez and Maduro were incubated," Tyrmand said before listing more leaders in a "who's who of the most vociferous Latin American Marxists."

"A lot of it has to do with the geopolitics of the corruption of the narco trafficking," Tyrmand explained, linking the trafficking with exploitation in Brazil's poor and Indigenous communities, groups that turned out for Brazil's former President Jair Bolsonaro in the country's last election.

Tyrmand said those groups "showed in this election" but were "disenfranchised" as many claimed there were errors in the voting machines.

Bolsonaro launched a challenge to the presidential election in late November after the runoff and said there were "signs of irreparable ... malfunction" in some electronic voting machine. The head of Lula's Workers Party said the bid was mere "chicanery."

"This is bigger than Bolsonaro. This is about the Brazilian constitution, and the people have a right to march. And if the judges could, they'd be arresting the protesters," Tyrmand said of the people in the streets in Brazil who have come out to protest and comment on Lula da Silva's corruption.

Lula da Silva was convicted in 2017 for money laundering but a court threw out the conviction in March 2021.

Tymand mentioned how, "In Brazil, you've got a private sector media that is so hard left in the bag for Lula."
PosoSundaySpecial