POSOBIEC and LIBBY EMMONS: Elon Musk is 'Taking Out the Trash' at Twitter 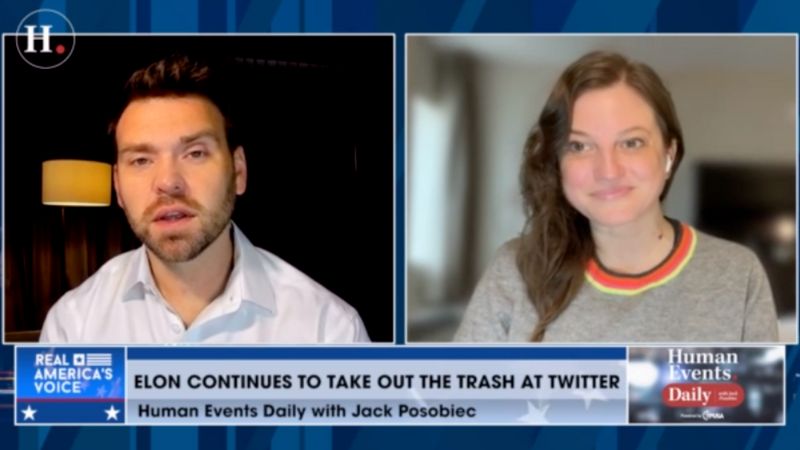 On his Friday episode of Human Events Daily host Jack Posobiec spoke with The Post Millennial Editor-in-Chief Libby Emmons about Elon Musk taking the trash out at Twitter and getting the quiet-quitter generation to either work hard or work somewhere else.

The memo arrived as Musk made sweeping layoffs, particularly of employees who used company messaging channels to speak negatively about their new boss.

"And anyone who's worked an office job knows that you spend maybe two hours a day working and the rest of your six hours muddling around, trying to figure out how you're going to get through the day that you've finished all of your work," Emmons added. "We've seen Twitter HQ, they have, you know, meditation rooms and yoga rooms and all of these things that don't have anything to do with real work."

"And perhaps it's time for these people to realize that work is not sitting at your computer, DMing your friends at work about when you're gonna go get your matcha lattes, perhaps work is actually buckling down and doing some real, you know, actual labor, taking pride in what you're doing and getting it done," Emmons added.

She added that "the people who were mostly interested in getting lunch" are out the door at Twitter.

While many former Twitter employees have struggled internally with the position at the company, the two discussed how many in the media sphere have also been melting down over Musk's direction of the company.

"I'm seeing blue checks all over the place, claiming that they're going to be leaving Twitter because it's just too much of a cesspool anymore and seeming to rejoice in Twitter's demise," Emmons said. She also noted that there has been intensive user engagement in recent weeks because "when there's a controversy, when there's some hype going on everybody flocks to the platform."

Posobiec compared Musk's strategy to professional wrestling, as he takes on the persona of "the big bad boss, the big bad CEO who's going after the employees and how dare you," noting how that drama incentives users to engage and it's likely a marketing strategy.

The two also noted, strategy wise, Musk is getting ahead of the game.

"And you're seeing, by the way, layoffs across the entire tech sector," Posobiec said.

"They're laying people off right now. This does not bode well for the economy. And it just shows the tech sector has had a lot of dead wood in it from the start," he added.

Amazon and Meta have both had major layoffs in recent weeks.