POSOBIEC and LIBBY EMMONS: FTX 'Heist' Potentially Goes All The Way Up to the DNC 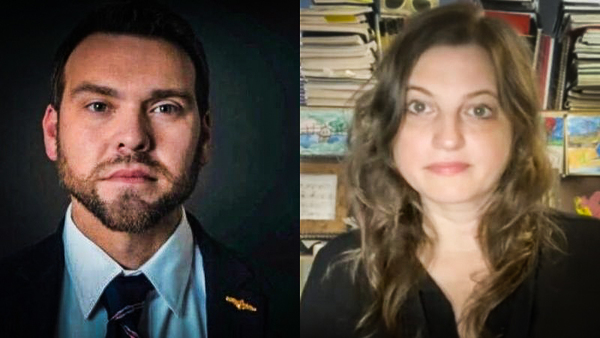 Jack Posobiec and Libby Emmons by Joshua Young
Human Events Daily host Jack Posobiec was joined by The Post Millennial's Editor in Chief, Libby Emmons, where they "took a step back" and looked at the FTX scandal, which Posobiec called a "heist."

Posobiec said that while people may be distracted by Ukrainian lies about missiles hitting Poland, and election results, the FTX story needed to be put on top of mind.

Emmons explained that FTX was a crypto exchange "where people can buy and exchange cryptocurrencies."


Posobiec said that it sounds "innocuous, but the whole thing falls apart and gets destroyed when you hear that the founder is some kid," that kid being Samuel Bankman Fried, who is currently in the Bahamas and may be extradited to the United States.

Bankman-Fried was "touted as a boy genius" and his girlfriend, Catherine Ellison, was the CEO of a hedge fund that was founded by Bankman-Fried.

"What happened was, essentially, some doubt came into play as to the value of the coin that FTX issues, and that doubt was raised by another large crypto exchange, Binance. Once that doubt came into play, there started to be some concerns and there was a run, essentially, on FTX," Emmons explained, saying that customers came to get their funds out to no success, as the firm did not have their funds.

"Bankman-Freid took a look around and said, 'maybe what we need is a bailout,' to which he asked Binance and other crypto companies for some help. Binance took a look and said after some due diligence that they would not bail out FTX, and it was further discovered that FTX had, through a backdoor without any real oversight or anything like that, given some $10 billion to Ellison's company in order to bail out that company."

Posobiec interjected, "he was using a backdoor into his own system to funnel millions of dollars to prop up his girlfriend's company, is that what you're saying?" "Correct," said Emmons, "without any of the users knowing this."

"There was absolutely no transparency, and there's no regulation here. And because the companies were in the Bahamas, they pretty much were allowed to do whatever they wanted. So, once this was realized that he was skimming off the top, that the funds were going to this other company that he had an interest in both personally and professionally... the whole thing really started to fall apart. I thought it was interesting, too, that the CEO of Binance was not going to bail it out at all. He took an interesting approach, saying that if the company couldn't stand on its own then it would fall. "

Posobiec explained that Bankman-Freid was touted by the likes of Bill Clinton, and Tony Blair, and was donating "tons of money" to the Democrats.

"He became the number-two donor to the entire Democratic Party throughout the 2020 year, followed by George Soros, through this essential Ponzi scheme, where people thought they were making money and investing in this 'coin' called the FTT coin, that they were going to be issuing when it turned out the entire thing was absolutely worthless, it was actually a Ponzi scheme and the only people making any money off of it that we can see here are, himself, his girlfriend, and the Democratic Party," he concluded.
Jack Posobiec
Jack Posobiec and Libby Emmons by Joshua Young