BREAKING: Matt Gaetz Says He Will Not Be Voting for Kevin McCarthy for Speaker 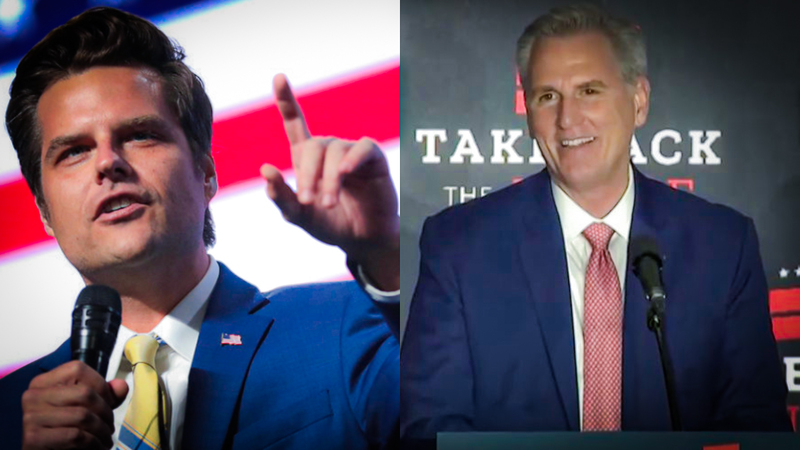 gaetz mccarthy
This article was originally published at The Post Millennial, a part of the Human Events Media Group.
*****

After the midterms proved disappointing for the GOP, who were hoping for a "Red Wave" that would lead to significant gains in Congress, many Republicans are calling for new leadership, including Florida Representative Matt Gaetz who has declared he will not vote for Kevin McCarthy for leadership in the House.

On Monday's episode of "The Charlie Kirk Show," Gaetz told the host, "I'm making my announcement, which is that I'm not voting for Kevin McCarthy. I'm not voting for him tomorrow, I'm not voting for him on the floor. And I am certain that there is a critical mass of people who hold my precise view and so the sooner we can sort of dispense with the notion that Kevin is gonna be speaker, then we can get to the important work of actually looking at who are the people that Brian Fitzpatrick and Matt gates can agree on."

Brian Fitzpatrick is a Republican Representative from Pennsylvania.

On Friday, Gaetz posted on Twitter, "Kevin McCarthy: Defended Liz Cheney when @jdanbishop first sought her ouster Told GOP Leadership Trump should resign after J6 Kevin is FLIGHT over FIGHT when the chips are down He is not a Speaker for these times."


Marjorie Tayloe Green warned against moving past McCarthy while speaking on the War Room. She told host Steve Bannon that politics is a "blood sport" and the GOP should be wary of how Democrats could use the in-fighting to make gains.

"Matt Gaetz, closest ally, somebody I trust all the time," MTG said. "All of these people that are involved in this challenge are my friends. If you know Jake Sherman wants to call it the MTG wing of the party, that'll be it. But I'm also willing to step out and I know the ground. I know how it works on the inside and outside. And we have to put someone in for speaker that is going to be elected and not allow the Democrats to pull away one or two because that's what they want to do and they can do it."