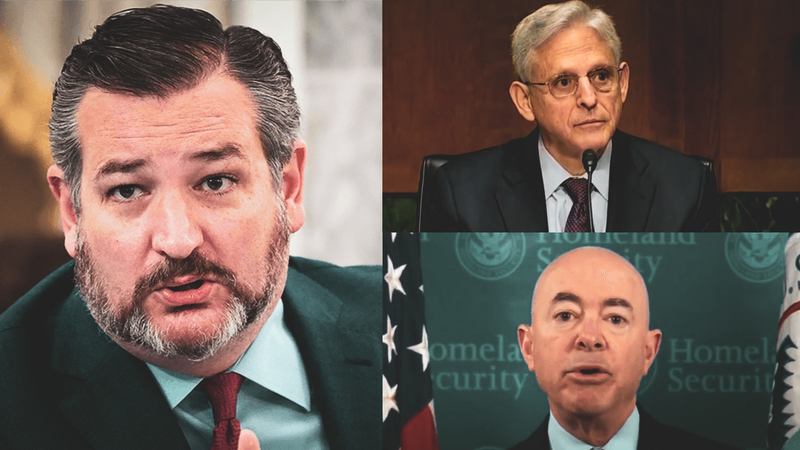 cruz_mayorkas_garland.
Texas Senator Ted Cruz appeared on The Charlie Kirk Show on Tuesday, where the two discussed Monday's news regarding the Department of Homeland Security and its collusion with Big Tech, after leaks showed that the DHS began meeting with Twitter, Facebook, and Wikipedia to coordinate "content moderation" in 2020. This, along with the Biden regime's blatant use of a politicized DHS, FBI, IRS, and other agencies, prompted Cruz to call for the resignation of high-ranking officials like DHS Secretary Alejandro Mayorkas and US Attorney General Merrick Garland.

Speaking of the leaks, Sen. Cruz said, "I wish I could say I was shocked but I'm not shocked."

"We've seen this more and more with the federal government corruptly getting into bed with Big Tech. We now know also that the FBI was actively urging big tech to censor the story about Hunter Biden's laptop. They were doing it, the FBI told Big Tech that was Russian disinformation." Said Cruz. "That was totally false, we now know the story about Hunter Biden's laptop was true, it was accurate and big tech censored it, forced the corporate media to censor it, and it was actively at the behest of the FBI."

"That's really what [my] book [Justice Corrupted] is all about. It's about how Barrack Obama and now Joe Biden have politicized and weaponized the Department of Justice and the Department of Homeland Security and the FBI and the IRS, and they've turned them into weapons to target their political enemies. It is a profound threat not just to the rule of law, but to the individual liberties of all of us," said Cruz.

Kirk interjected, saying "What's so interesting, senator, about this DHS story is in the leaked documents, they kind of self-appointed themselves a role. You are one of the most articulate persons on the separation of powers and also congressional oversight, and these bureaucracies, the fourth branch of government that kind of do whatever they want. Senator, you're on a lot of these committees and vote on a lot of these bills."

"Since when did these agencies get permission or inform you that they were going to be involved directly in election meddling of information? I mean, did they just get to chart their own path now? This is outrageous," Kirk added.

Cruz responded, "They haven't, and they largely defy congress. If you look at the history of it and you go back, the book Justice Corrupted starts with Richard Nixon, and Nixon tried to do this. He tried to use the DOJ, the IRS, and the FBI to try to go after his political enemies, but by and large the system worked. The system resisted being politicized and Nixon resigned in disgrace."

He went on to say that Obama succeeded where Nixon failed. "He directed the IRS to target tea party groups, he targeted conservative groups and pro-life groups, and pro-Israel groups, they went after them and persecuted them. Then DOJ flocked investigations into them, defied congress... After eight years of deep politicization of the federal agencies, what happened is these hardcore partisans burrowed into these senior career positions at the agencies and when Trump became president, the deep state waged war on Trump."

"One of the things I talk about in Justice Corrupt is the meeting in the Oval Office on January 5th, 2017 with Barrack Obama, Joe Biden, the head of the FBI, the CIA, and the DOJ, this is 15 days before Trump would be sworn in as president," Cruz said. "In the Oval Office, they agreed together to go after Trump, to attack him, and for four years of the Trump presidency, these partisans tried to destroy Donald Trump personally and tried to destroy the Trump agenda, and now under Joe Biden, it has metastasized, it's out in the open. They aren't hiding it anymore, they view the machinery of the government as the stormtroopers for the DNC and their partisan agenda."

He later discussed the Biden regime's IRS bill that saw tens of thousands of new agents hired "... The Democrats just ran through a bill authorizing 87,000 new IRS agents, special agents who can carry guns, who can come knock down your door, and that is designed to target and harass and go after you.

"When you talk about the IRS wanting visibility into your financial transactions, remember, Bernie Sanders' Build Back Better plan that Joe Biden put as his number one priority, part of that was requiring financial institutions to report every transaction of $600 or more to the Department of the Treasury. That means your rent... Every single financial transaction, maybe your car, heck give the Democrats another year or two, it might be filling up a tank of gas."

"They wanted that power, they came very close to getting it, I believe when we take the majority, and I believe we're going to take both the House and the Senate. When we do that, I think one of the very first priorities needs to be defunding those 87,000 new IRS agents, I think right after that we need to impeach Alejandro Mayorkas the secretary of homeland security, and right after that we need to impeach Merrick Garland for politicizing and abusing the Department of Justice and the FBI," Cruz said, to which Kirk agreed.
Charlie Kirk, ted cruz, The Charlie Kirk Show
cruz_mayorkas_garland.