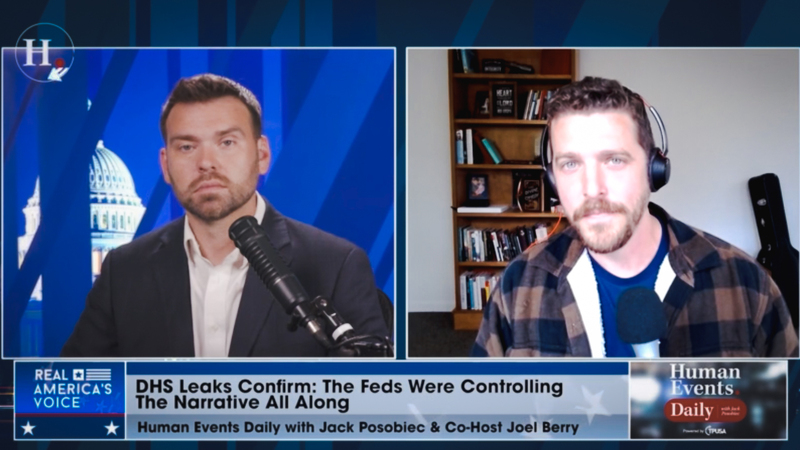 Poso Berry
"Everything you thought was going on, is actually worse," Human Events Daily host Jack Posobiec said on Monday's rendition of his show. "We have information that was first leaked to the Intercept of meetings that were held between the Department of Homeland Security, the FBI, Twitter, Facebook, Wikipedia, JP Morgan Chase, and many other big tech firms that started in 2020 and have been ongoing throughout the years and months since. All about censoring disinformation, content moderation, shutting down your freedom of speech here on the internet," said Posobiec, who was joined by Joel Berry, the Managing Editor of the Babylon Bee.

Stories that were censored included the Hunter Biden laptop story, the origins of Covid, and Biden's exit from Afghanistan.

"Why are our tech companies essentially becoming agencies out of 1984?"

"I think it's something we all suspected was going on," said Berry. "It's still quite a shock, it really confirms what I thought about these big companies in a sense that, they're kind of a way for the government to do what they have always wanted to do that's constitutional and allowed. They've kind of laundered their censorship through these big tech firms. It's something we all kind of felt. We felt it in the Twitter algorithm, we felt the thumb on the scale of our discourse as we interacted on different platforms and to see it confirmed like this is just wild... Again, kind of not surprised."

Posobiec said that it was "crazy" that a site like the Babylon Bee would be "Targeted so much, whether it's for misinformation or hate, or whatever."

The Bee, a satirical site, has been locked out of Twitter since it called Rachel Levine a man in March of 2022.

"Why is satire so dangerous to this group of people?" asked Posobiec, to which Berry said that satire is something new to the right but is something the left has been good at "for decades."

"Going back to Saul Alinsky's rules for radicals, he talks about the power of mockery, and it's something that the right has never really employed effectively, so I think when the Babylon Bee started doing what we were doing, I think the left immediately recognized the power and danger it imposed to them and on their narrative and their agenda. I think the people who knew, knew it had to be stopped one way or another,"" said Berry. "They came for us blatantly in the beginning with Snopes and fact checks, now it's a lot more sneaky. It's done through the algorithm, and as we know now, through these backdoor meetings with the government.

"In our book, The Babylon Bee Guide to Democracy we talk about the fourth branch of government being the corporate branch. That's essentially what the government's done," Berry added. "All these things that they're unable to do, that the constitution doesn't allow them to do, they can accomplish through the deep state, through the regulatory agencies in partnership with these corporations that have grown so powerful, and their relationship with the government is more important to them than their relationship with consumers, to advertisers and things like that. I think what Elon's doing is pretty exciting, just going in there and blowing it all up."

Posobiec said that he agreed, and said that the way that he sees it, "these people have had so much power for so long. Really, in the past six years, they've had the ability to become super powerful. These are preternatural powers... When you're in the Matrix, the agents have more power than everybody else except for Kianu Reeves, but we all know Keanu Reeves is the most powerful human to ever live," said Posobiec through a chuckle.

"These hall monitors, these schoolmarms, these censorship organizations, the disinfo journalists, and they're out there crying on MSNBC this morning saying, 'we can't ban Elon, there's nothing we can do! He can spread whatever he wants and promote this and go after that!' And it's like, yeah that's how the internet was, that's how the world is on a regular basis. If you and I are just talking in person, there's no intermediary... As a way to stifle that communication," Posobiec said.

"You might remember the early days of YouTube... When Ben Shapiro used to go viral and people would be convinced," said Berry, saying that the YouTube algorithm used to make people conservative because of the ideology's powerful message, and that Google and YouTube eventually changed that.
Jack Posobiec
Poso Berry