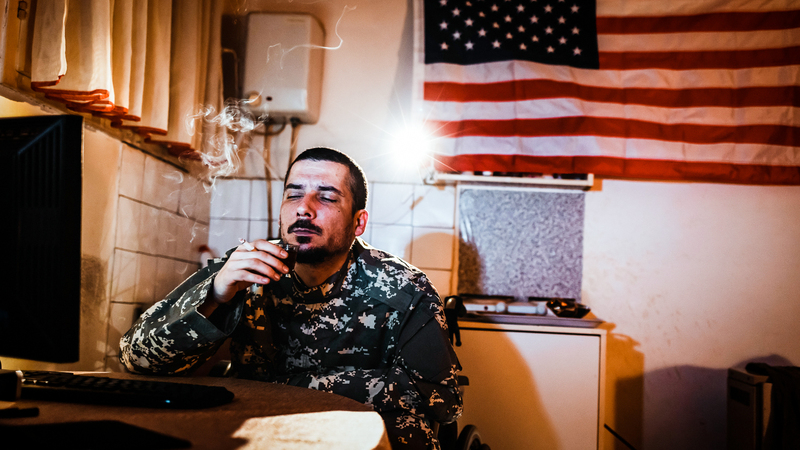 Soldier Smoking
When someone is being trafficked, the abuser generally has a vested interest in keeping them alive in order to keep generating profits. If a victim is alive he or she might still have an opportunity to be free eventually.

However, the desire to keep someone in that situation alive has its limits. If a victim becomes too much of a liability for the trafficker the victim's life is seen as disposable to the abuser. If there is a huge supply of victims for the abuser, each victim then becomes extremely disposable. An unfortunate example of this is when traffickers left thousands of Nigerian victims to starve and die during the COVID-19 lockdowns in Italy. In the eyes of their traffickers, there was no benefit in keeping them alive.

The threat of global war is breathing down our necks. There seem to be few in leadership calling for de-escalation. If the US were to enter a large-scale war, the chances that a draft would be required are high. Everyone thinks that they could never fall prey to a trafficker. It seems like a crime that only happens in movies to pretty girls walking down alleys alone in the middle of the night, meanwhile many could end up being trafficked by their own government. Military recruitment is at an all-time low, .

With a current force of just over one million, the nation is far short of the 16 million that were required to fight the last world war. Is the youth of today truly ready for that fate? Do you trust the government to make the best choices with your life in mind, or will you be just a number and part of the cost of war? They won’t have much incentive to keep conscripts alive, because there is a large supply of youths of fighting age in America.

I consider military conscription to be human trafficking. I believe that using force, fraud, or coercion to exploit others for labor falls under the umbrella term of “human trafficking,” which includes both labor and sex trafficking. Child soldiers are already considered victims of human trafficking globally because a child can not consent to fight in a war.

As far as I am concerned, if an adult does not consent to fight or is coerced into fighting in a war this is also human trafficking.

The state (the abusers in this case) will keep you fed and clothed while you work for them, but they can't guarantee your survival– and it won't be the priority.

Refusing to report when drafted carries stiff penalties and is a difficult option in our connected world. If you become a draft dodger, you likely couldn't stay home or continue working. You can kiss social media and most connections to your friends and family goodbye, as you wouldn’t want any digital trace of your whereabouts.

“If you are required to register and you do not, you will not be eligible for state-based student aid in many states, federal job training, or a federal job. You may be prosecuted and face a fine of up to $250,000 and jail time of up to five years.”


I can definitely understand the desire to support innocent citizens trapped in war-torn countries. The beauty of the digital age is that we can all be voices for the voiceless and vulnerable. We are able to organize and fund relief efforts and pressure our governments to avoid decisions that increase harm. There is nothing wrong with self-defense if a country is invaded, and there is nothing wrong with being supportive of others while they are defending themselves.

If you choose to support those in countries at war, you must ask yourself to what extent are you willing to go and what are the realistic impacts of continued conflict. Would you be willing to go fight for them yourself? Are you willing to risk global nuclear war or does your support start and stop with putting a flag in your bio?

The has only been one situation in which I had to weigh the overall risks of intervention and make a very difficult decision. That was while advocating for survivors of child sexual exploitation material distributed on social media platforms. It came to a point where I realized that many in the anti-trafficking space, the governments, and those seeking power are willing to use this very real crime as an excuse to violate digital privacy rights.

I decided that I was not willing to sacrifice the privacy of innocent citizens globally to serve some survivors of sexual exploitation. Creating a world of slaves under mass surveillance was not worth stopping one type of crime. It broke my heart to take that stance. I had to step outside of my own trauma and emotions attached to the horrific crime of child sexual exploitation and see the bigger picture. I had to ask myself, "At what cost am I willing to solve this issue?"

When the costs outweigh the benefits, the choice is easier. I can still advocate for survivors with solutions to online sexual exploitation that don’t violate privacy rights. The best option often requires more effort. If a solution asks for a huge sacrifice from the entire population, every effort must be given to find another way.

Sometimes in life, you have to zoom out and ask, "Am I making this situation worse in the long run?"

Personally, I’m not worried that I will be drafted into a war as women aren't currently required to register and I'll soon exceed the age limit. As a survivor advocate, whenever I see a case, I always ask myself how the crime could have been prevented from happening in the first place.

I’m sending out a warning, especially for the youth, that we should prevent state-sponsored trafficking through military conscription in the United States before it happens again. Demand that Congress abolishes the Selective Service system and advocate for anti-war policy. Millions of lives around the world hang in the balance.

Eliza Bleu (@elizableu) is a human trafficking survivor advocate and a survivor herself. On The Eliza Bleu Podcast, she dives into difficult, but rewarding conversations about the trials and traumas people experience and the triumphs and healing possible.