POSOBIEC: Biden Says Italy's Meloni Is a Threat to Democracy—He Should Take a Look in the Mirror 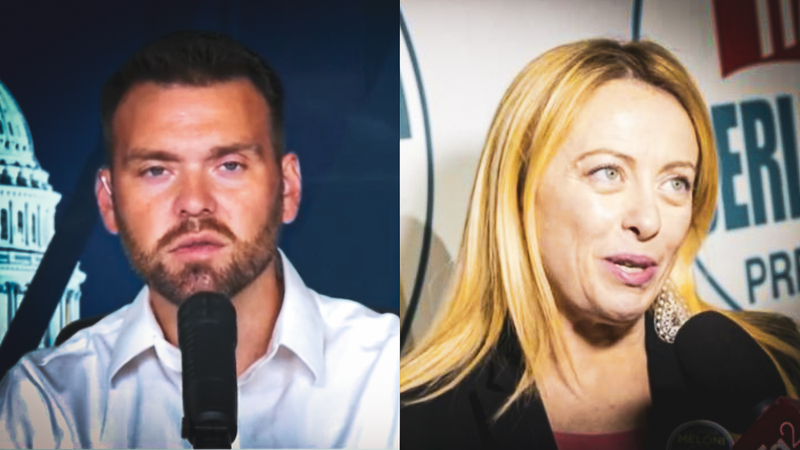 Jack Meloni
Human Events Daily host Jack Posobiec slammed President Joe Biden after he warned Americans that the US could enter a dark period by electing a right-wing leader, like Italy just did in the form of Giorgia Meloni.

On Sunday, Giorgia Meloni’s Fratelli d’Italia claimed victory in Italy’s federal elections with 26 percent of the vote, making history as the first female-led party to win. Biden went so far as to suggest that Meloni presented a threat to democracy.

"So President Biden was speaking at a fundraiser last night, and he stated that a 'huge warning'...for his donors, for his supporters, that the United States could follow Italy's path in electing an anti-democratic strongman, or in this case, strong woman, Giorgia Meloni," explained Posobiec.

Biden went on to suggest that MAGA Republicans pose a similar risk to democracy in the United States, arguing that a system of government can’t function if one side refuses to accept the outcome of an election.

"President Biden does that all the time, by the way," said Posobiec. "He's constantly raiding the opposition. It's come to the point now where there are people getting raided [such as the] pro-life activist in Pennsylvania. They're getting raided so much, Biden's raiding so many members of the opposition that we're all starting to get used to it. It's starting to enter into some normalcy phase."

"We understand that there are other parts of this world... Where this happens all the time," he concluded.

On Tuesday, Catholic pro-life activist and father of seven Mark Houck pleaded not guilty to federal charges after having been accused of violating the Freedom of Access to Clinic Entrances Act (FACE Act) due to an altercation more than a year ago outside of a Pennsylvania abortion clinic. Approximately 20 heavily armed FBI agents arrested the 48-year-old at his home at gunpoint on Sept. 23 and placed him in handcuffs in front of his wife and children.

The raid on Trump's Mar-a-Lago home also took place under the Biden Department of Justice, though the White House's official position is that the president found out about the raid the same way all other Americans did, saying that he was "not briefed" on the event.