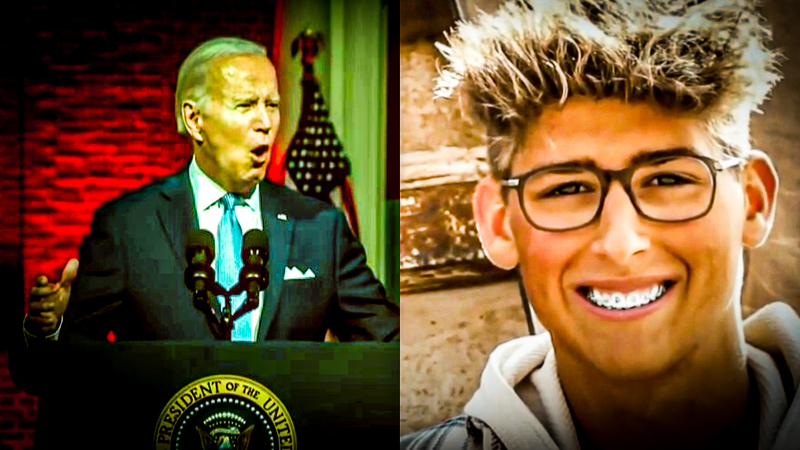 At the beginning of September, in his second year in office, Joe Biden desecrated our nation’s birthplace with a hate-filled speech that can only be described as demonic, on sacred ground at Independence Hall. In this speech, Biden laid out all issues of the country at the feet of his target scapegoat group - MAGA Americans. Biden warned that MAGA Americans were a threat to democracy itself within our nation.

Two weeks later, a left-wing adult in rural North Dakota murdered a teenager for being Republican. He admitted this to police while seemingly unaware he had done anything wrong. In fact, he complained about his bail being too high. At this time, he has not even been charged with murder. Biden has claimed repeatedly to be interested in unifying the country, but perhaps what he really means is unifying the Left against anyone who disagrees with them.

In the early hours of a Sunday morning in rural McHenry, ND, 41-year-old Shannon Brandt got behind the wheel of his car and turned it into a weapon. He targeted 18-year-old Cayler Ellingson, chasing him down an alley as the teen called his mother for help. Brandt and Ellingson had previously had a political disagreement at a street dance, and Brandt told police that he believed Ellingson was part of a “Republican extremist group.”

A police report shows that the killer “struck the pedestrian because the pedestrian was threatening him.” The driver claimed that he believed that Ellingson was going to harm him in some way. After Brandt was questioned, it was revealed that after he struck the teen, he failed to provide aid, per North Dakota law. Ellingson later died from his injuries in a local hospital. Brandt walked free on a $50,000 bond.

Drew Wrigley does not understand what time it is.


It was his fear of a man more than 20 years his junior holding political views that were different than his own that drove Brandt to the commission of this horrific crime. While there is no one to blame but Brandt for his actions, it was his hand on the wheel, his fear, his intention. It is notable that a pervasive and palpable hate has formed in the country for those with conservative views.

When CBS reported on the story, they left out the part about Brandt claiming that Ellingson was a Republican extremist, instead saying that Brandt “told investigators that he purposely hit the tean with his SUV after they had a political argument.” CBS did not mention that Brandt was riled up about so-called Republican extremists, or that he believed Ellingson was one of these. They left that part out entirely.

Yet this is how Brandt, according to police reports, justified vehicular homicide and leaving the scene of a deadly accident. He admitted to police that his actions had been politically motivated. What kind of political motivation could lead a grown man in a car to mow down a teenager instead of simply driving away?

The kind that implicates anyone who does not agree, and that hatred comes directly from the Oval Office and is supported and fueled by the Biden administration.

The kind that was stoked by our nation’s president, a man who feels it is his responsibility not to secure our borders, ensure our security internationally, or work towards a healthy economy, but to foster hate, division, and resentment among Americans.

The kind that takes hundreds of men and women who rioted on January 6 and leaves them rotting in prison for their crimes of trespassing while allowing a man who committed murder in service to a political ideology to walk free on bail.

It was only a few weeks ago that President Joe Biden stood in front of Philadelphia’s Independence Hall, where our founding fathers conceived of this great nation, and delivered a speech that sought to divide the nation, desecrate our values, and insult, belittle, and demean his political opponents and their supporters. Biden claimed he was there to unify the nation; he wasn’t.

He claimed he was there to stifle hatred and resentment; he wasn’t. He was there to stoke it, to inflame it, and to give cover to his own supporters who look out on those with whom they disagree as political enemies that must be silenced on social media, fired from their jobs, canceled by tech companies, and for men like Brandt, eliminated entirely.

And that’s just what happened in a small North Dakota town on Saturday night when a middle-aged man determined that a conservative teen was out to get him and ran him down with his car, extinguishing a life over perceived political differences. “Donald Trump and the MAGA Republicans represent an extremism that threatens the very foundations of our Republic,” Biden said before a blood red backdrop in Philadelphia. His supporters took heed.