POSOBIEC: Whitmer Kidnapping Verdict Shows ‘We Need To Do Something About the FBI’ 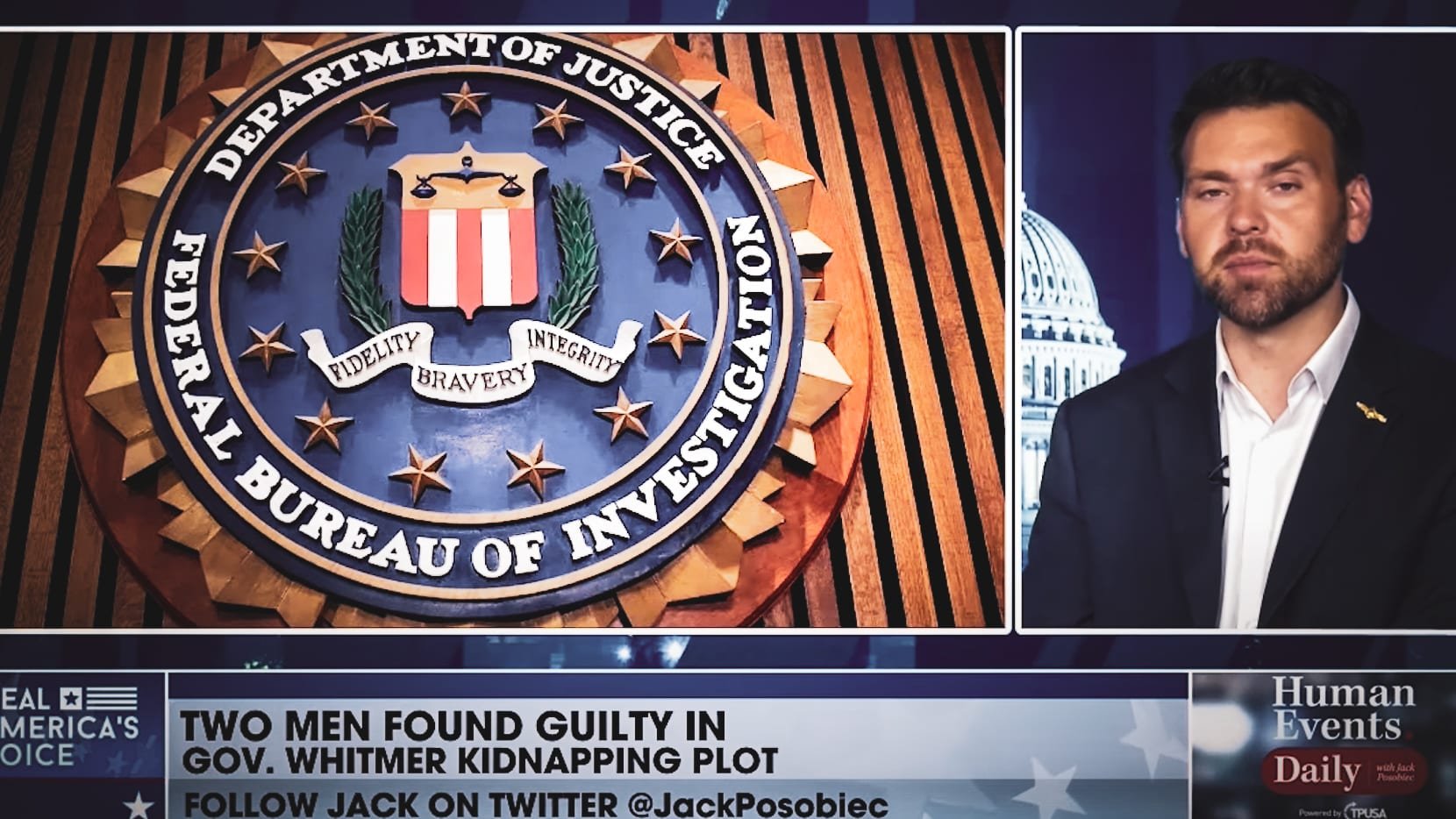 Human Events Daily host Jack Posobiec discussed the idea of the FBI being broken up into smaller departments following the conviction of two Michigan men after they were found guilty during their second trial of plotting to kidnap state governor Gretchen Whitmer.

The two men were on trial for the second time after a jury in April could not reach a unanimous verdict. That trial also found two other men not guilty in the alleged attempted kidnapping.

"Explain this to me; we've got a situation now where the news just came in. Two men were convicted for conspiring to kidnap Michigan Governor Gretchen Whitmer in 2020," said Posobiec of the two men, Adam Fox and Barry Croft Jr, who were found guilty of trying to obtain a weapon of mass destruction to destroy a bridge near the governor's vacation home and of plotting to kidnap Whitmer.

Posobiec commented on the fact that the men were on trial for a second time after a jury could not reach a unanimous verdict, saying, “Why was that early jury not able to make this case? Well, I'll tell you why. It's because of the massive use of FBI agents and FBI informants, of an entrapment plot to set people up, and we have text messages that we've seen that even Buzzfeed has put out. You can see the elaborate entrapment operation that was run on people. They'll push you and push you right up until the line and then you take one step across it and they swarm right in.

Posobiec then questioned the narrative, asking if the FBI created criminals and a plot in order to improve the Bureau’s public image.

“So the question for us is, obviously, we don't want people committing any crimes like this or anything of this sort, but what has the FBI done? The question before us is: Did the FBI create criminals, create a plot, create a situation where people could be conspired against in order to convict them, and did the FBI do this so they'd be able to rack up their numbers and say, 'look at this, look at how great we are.'?"

In the case of the Whitmer plot, the defense argued that the FBI entrapped the men in the plot. "The government picked what it knew would be a sensational charge: conspiracy to kidnap the governor," the attorneys wrote.

The investigation started when Army veteran Dan Chappel became a member of a Michigan paramilitary group. He became alarmed once he heard members talking about killing the police. Chappel made an agreement with the FBI to become an informant, and spent summer of 2020 befriending Fox and others, secretly recording conversations, and participating in "shoot house" drills in Wisconsin and Michigan.

The FBI would later embed two more informants and undercover agents into the group.

“So the question now is, are we going to allow this? We need to do something about the FBI. Whether that's scattering a part and smashing it with a hammer, dividing up its abilities among the different agencies?

Posobiec then talks about information he received from John Solomon of Just the News: “this is what he's hearing, according to his sources, there's a plan to divide the powers of the FBI up among various government agencies and strip away this idea that federal criminal investigation and national security investigations should be housed under the same room."

“I say, get rid of the J Edgar Hoover building from Washington DC, actually go in and dismantle that building brick by brick, because guess what, I want law enforcement to go after child sex traffickers. I want law enforcement to protect our border, and to go after all these crimes against children, the grooming, everything. Bank robbers, terrorists, murderers, you got it. But the way this organization has conducted itself has shown us that we can't trust them. We can't and we can't let it go on any longer,” said Posobiec.

Gov. Whitmer commented on the trial by saying she hasn't been paying attention to it, but said that there is a "dangerous trend" happening. "We cannot let it become normalized and I do hope that anyone that’s out there plotting to hurt their fellow Americans is held accountable."