HERNANDEZ: Big Tech Keeps Trying To Destroy My Career, But I Am Relentless 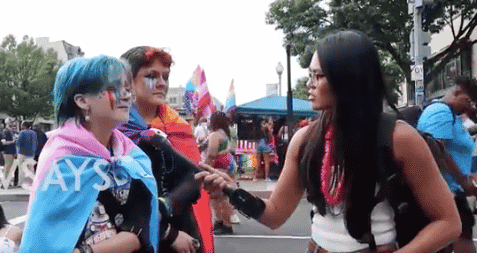 Since I was a young girl, I’ve always felt that I needed to make a positive impact with my life. I just never thought that politics is where that impact would be made. I also never thought that after four years of literal blood, sweat, and tears, all of my hard work and dedication to this field would be simply deleted.

It is common knowledge that Twitter is the new public square, and for independent journalists like myself, it’s one of the most powerful tools in breaking national news. But it’s not a fair playing field.

I started my career in 2018 and after almost five years of documenting the biggest events in recent history— the BLM riots of 2020, January 6th, Biden’s collapsing economy— I have been permanently banned from Twitter for simply sharing my work.

Welcome to journalism in 2022. Telling the truth is an almost impossible task, and it’s getting more dangerous by the day. Journalists like myself have been met with violence in the streets, slander to our names, and repeated targeting by Big Tech and leftwing “reporters”.

Back in 2020, after 3 years of hard work in the field, I had amassed a pretty solid Twitter following. Access to this platform had allowed me to break news multiple times and landed me news and radio hits on various networks such as Fox News, OANN, Newsmax, and BlazeTV. My hard work had paid off and my dream of telling the truth was now a reality.

That all came to an abrupt halt when Twitter decided to delete the entire career I had worked for and at 23 I was suspended from the platform for “ban evasion”.

It was a cool evening in November, and my first break after two weeks of riot and protest coverage. After working tirelessly, covering the Black Lives Matter riots of 2020, I was finally taking a day off. I had just gotten back from Washington, D.C. where I covered President Trump’s Million MAGA March. The type of journalism that I do is simple. Point, shoot, and caption where I am and what is happening on the ground.

That’s what I did when I took a shot of the large crowd in attendance at the Million MAGA March. Everyone was singing the “National Anthem”. It was a beautiful moment and my footage garnered a retweet from President Donald Trump, resulting in almost 10 million views. My celebration of this moment was short-lived, because only a week after that retweet, on my first day off in what seemed like forever, my entire account, with multiple breaking news clips and millions of impressions, was permanently suspended.

There was no initial reasoning and after multiple appeals, Twitter finally emailed me a month later sharing that I was deleted for “ban evasion”. The only problem was that this was my only account and I had never even had a prior suspension. That didn’t matter, and after their response, I would never hear from them again.

Initially, I felt discouraged, I had put my life on the line, gotten beat up, maced, and tear-gassed to give Americans the best coverage of every event that I could. However, I wouldn’t let this deter me. I started a second account. Less than a year later, my work would again be censored after breaking national news.

The second ban came after I interviewed the first NCAA athlete that was willing to speak out against transgender swimmer, Lia Thomas.

She gave me a quick but passionate interview, highlighting how upset the girls in the competition were.

“I have a teammate who did not make finals today because she was just bumped out of the finals. It’s heartbreaking to see someone who went through puberty as a male and has the body of a male, be able to absolutely blow away the competition” she shared, “you go into it with a mindset that you don’t have a chance”.

Her teammate was brought to tears as it was her last NCAA championship and Thomas had just stolen her opportunity to compete for first place. Athletes and parents shared with me that NCAA officials told competitors not to speak to anyone in the press, “don’t even mention Lia Thomas’s name in the locker room” one parent told me. But this athlete decided to speak out.

This was not without intense bravery on her part. She was worried that her entire swimming career would be destroyed. She worried that she would face backlash from her school or worse, the NCAA would keep her from competing. After careful deliberation, she finally decided to let me release the clip.

Her interview went viral and was picked up and aired on Tucker Carlson Tonight. She had pushed back against the entire mainstream narrative that athletes and parents weren’t upset about Thomas competing. Her words exposed Lia Thomas and destroyed the mainstream media’s entire narrative.

Three days later, after the interview garnered over 2 million views, her interview was gone, deleted by Twitter. Multiple pro-transgender accounts targeted my Twitter account sharing that I was drumming up “transphobic hate” against Thomas by sharing the interview and shooting footage of him beating the women competitors. Again, all I did was point the camera, shoot and let NCAA competitors have their voices heard.

This ban only lit a fire in my belly. This wasn’t about my work anymore, this was about a young woman being silenced for telling the truth. I started one more Twitter account. Again, this is still one of the best platforms for breaking news on a national and international scale.

My third account was recently taken down after footage and interviews I shot at D.C. Pride went viral.

Participants at Pride spoke about their gender identity and I captured a shocking clip of a naked transgender person twerking in front of children. These clips of course went viral for the shocking indecency on display. Those who watched the clips were shocked; those who listened to the interviews were baffled.

Two young teenage girls explained to me how they were, “questioning if they were bi, omni, lesbian, pan and queer”. After garnering over 4 million views and making almost every major podcast or television show on the right, you guessed it, Twitter deleted my account along with all of the footage.

In each of these instances, for each of these videos, I was called hateful. Yet each time, I simply allowed Americans to speak about the events they were participating in. I don’t do “gotcha journalism” and I keep the captions on my footage as neutral as possible.

When it comes to my work, I want to allow the people to speak for themselves, and they do. And the leftwing hates that. It’s not me who is exposing their corruption, lies, and insanity, but people on their own side that are excited enough to be on camera.

This is why Big Tech seeks to censor journalists that provide documentation that refutes the narrative on a host of topics. Whether it’s the border crisis, the LGBTQ agenda, climate change or COVID I’ve tried to give a fair representation of how people feel on both sides. And Big Tech can’t stand that.

Independent journalism is so popular because this is what Americans want to see. They want truth. They want to know how people in their own country actually think and feel and when a journalist is willing to do that, they immediately silence and censor the footage as “hate” or “misinformation”.

Big Tech and the media are the most powerful organizations in our country. They have the power to change the narrative, destroy a person’s reputation, and rewrite history. This power, unchecked, has resulted in the unjust destruction of Americans' lives and careers— remember what the media did to Nick Sandmann and Kyle Rittenhouse?

Independent media has been one of the most effective tools in countering the lies and real disinformation that Americans are being targeted with every day, and that is why we continue to be silenced.

Big Tech is rewriting our reality every day.

Black Lives Matter violently burned down our country in 2020. But if you try to go find my footage of BLM looting a black-owned business in downtown Austin, that footage no longer exists. Men are now dominating women’s sports. But if you want to watch the footage of Lia Thomas’s 5-second lead during the 500y freestyle, that footage is gone too. Finally, if you want to see the truth about what children are being exposed to at Pride parades all across America, the clip of the naked man twerking on a police officer in front of children, now no longer exists.

We cannot allow Big Tech to take control of our reality and we cannot allow the media to sway the minds of millions. I have been mobbed by groups of ANTIFA members. I have watched as BLM rioters attacked families with children. I was in attendance at the rally on January 6th and despite the multiple threats to my life and destruction of my career, will never stop uplifting the voices of my fellow Americans. But I can’t do this alone.

For anyone reading this who thinks they can’t make a change, I feel the exact same way every single day. You will be the one who helps save America. If you see something that you don’t agree with: speak out, stand up and get vocal. We need to start pushing back now and we cannot let the truth die no matter how hard that may be. Our entire country and the next generation depend on it.