From the Human Events Vault: Will U.S. Liberals Ever Learn? 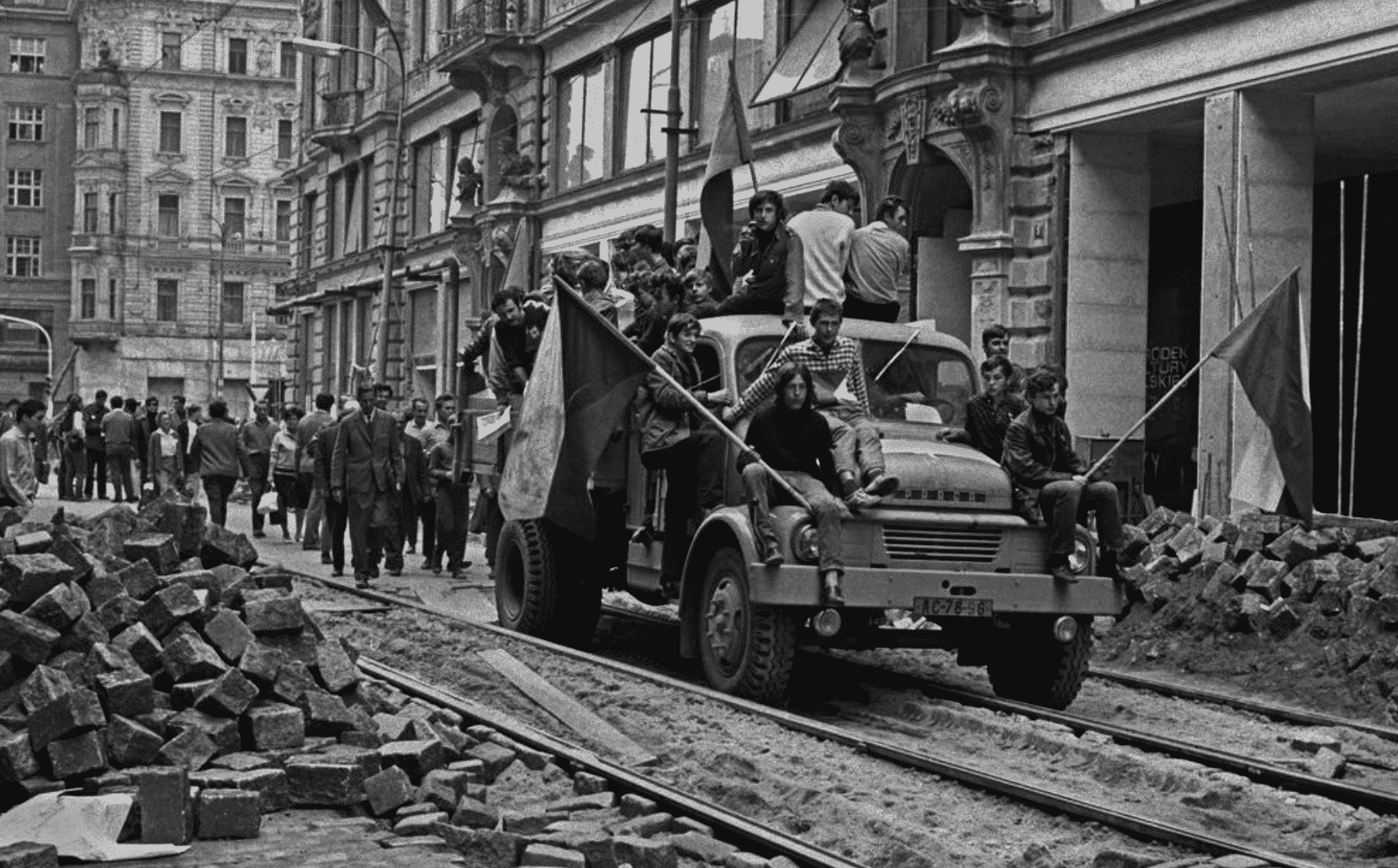 From the Human Events Vault is a new feature made possible, with the help of the Heritage Foundation, by our securing the entire past collection of Human Events publications dating back to 1944.

From time to time, we will run pieces from past issues that seem relevant to what is going on in our country or in the world today.

This selection, chosen from 1968, was written as the Soviet Union, along with other Warsaw Pact nations, marched into Czechoslovakia to ruthlessly suppress the people’s uprising which had begun in the now famous “Prague Spring.”  This piece is timely given today’s current warfare between Russia and Ukraine.

At Human Events, we are proud of our history, and we hope you will enjoy sharing in it with us when circumstances and opportunity present.

The Soviet seizure of Czechoslovakia last week produced a great deal of handwringing and a spate of fiery denunciations by U.S. government leaders. But in the last analysis, the ruthless suppression of this independent minded communist country was another tragic policy failure of the Johnson-Humphrey administration. For while the Soviets were sealing the Czech borders, and ringing Prague with over 100 tanks, the American government's response was reduced to giving the Soviets a bawling out at the United Nations.

UN Ambassador George Ball may have been eloquent in denouncing Soviet tyranny, but his rhetoric did absolutely nothing to bring about freedom and independence for the Czechs.

Within hours after the decision to invade had been approved in the Kremlin. troops from the Soviet Union, East Germany, Poland, Hungary and Bulgaria had smashed their way across the Czech frontier, rounded up top officials and occupied the country. “Libera” Czech Communist leader Alexander Dubcek and his aides were both seized and then charged with “treasonable actions” by the Soviet newspaper Pravda, raising the disturbing possibility that they would be executed a la Imre Nagy following the 1956 Hungarian uprising.

Cannon and machine gunfire ripped through the streets of Prague and other Czech cities, as long columns of Soviet armor swept aside a few feeble barricades and surrounded Communist party and government headquarters. There was some resistance, little of it organized. Citizens of Prague jeered at the invaders and daubed the Soviet tanks with swastikas, but many also fell before the Red guns.

Dear friend: Our citizens are being killed. Our cultural monuments are being destroyed, and there are even signs of looting. Please help us to keep our freedom.

But no one seemed to listen. As in the case of Hungary the Western powers led by the United States stood by and watched the Soviets club the Czechs into submission. U.S. officials have insisted we were helpless to act, but their arguments were not convincing.

Dubcek was a Red and a dictator; however, his mild reforms had unleashed a craving for freedom inside his own country, which he seemed unable to control in which seemed to pull Czechoslovakia in a pro-Western direction. Eventually, this passion for independence and freedom among the people may well have propelled Czechoslovakia completely out of the Soviet orbit. This certainly was what the Soviets feared. Thus, it was clearly to our advantage to try to prevent a Soviet takeover.

Victor Zorza, a criminologist and a liberal to boot, has suggested that the U.S. was singularly lax in its use of diplomatic power in this instance. Writing for England's Manchester Guardian, Zorza noted that it was repeatedly argued that any firm Western indication of interest in the survival of freedom in Czechoslovakia would only make matters worse, because it would enable the Kremlin to claim that the Prague reformers were the puppets of the “imperialists,” but the Kremlin, noted Zorza, was claiming that anyway.

“The West's failure to take a firm stand,” Zorza commented, “meant that the hardliners in the Kremlin could argue - as they undoubtedly did - that the United States were prepared to give Russia carte blanche in Czechoslovakia."

“Had the West taken a stand on Czechoslovakia, the more liberally inclined among the Communist leaders would at least have been able to argue that the hardliners must reckon with the possibility of serious consequences, whatever these might be.  Neither the West nor they should have needed to agree to specify the nature of the dangers."

“To keep the Kremlin guessing might have been more effective than to utter firm threats.  To make a few carefully thought-out, but quite unpublicized changes in the deployment of Western forces could have been equally effective - Soviet intelligence would have been sure to report this to the Kremlin, thus giving the hard-liners more food for thought and the ‘liberals’ more ammunition."

“For a long time, it was touch and go in the Kremlin as the delay in making the decision to intervene shows.  Where the arguments on each side were so finely balanced, diplomatic action by the West, supported by the implication that firmer action was possible, might just conceivably have tipped the scales. Certainly, the absence of any such indication from the West must have done a great deal to tip the scales the other way.”

Some diplomatic observers believed that we could have at least indicated to the Kremlin that any move on their part might result in the knocking down of the Berlin Wall or a step up in the war against Hanoi.

Preventive action along these lines of course, was no longer possible once the Soviets intervened. But the Johnson Administration isn't interested in doing anything substantive during the present time either. As Max Frankel reported in the New York Times:

President Johnson denounced the Soviet occupation of Czechoslovakia in strong language…but he indicated that the United States would do no more than lead the protests in the United Nations,

Sad but calm, the President and other high officials concluded that there was no safe way of resisting the forceful Soviet intervention. They hope that mobilized world opinion might save the lives of dethroned leaders of Czechoslovakia and encourage Moscow to install a moderate rather than a repressive regime.

This line of thought underscores the bankrupt policies of the Administration. Actually the U.S. government, if it had the determination and the courage, could employ a wide range of diplomatic and economic tools to bring pressure to bear upon the Soviets.

Available weapons include dropping the Moscow-New York air route, scrapping the cultural-exchange program, and halting East-West trade. To advance the Czechoslovakian cause, to advance the checklist Slovakian cars. Thomas Dodd, (D-CT), a member of the Senate Foreign Relations Committee, has outlined a number of steps that could be taken.

Dodd says that we should place an “immediate embargo on trade with the Soviet Union and with the four bloc nations who participated in the infamous invasion of Czechoslovakia, and that we should suspend or cancel all outstanding credits for any purposes to these nations.” Dodd also urges scrapping the most favored nation tariff privileges bestowed on Communist Poland. The Connecticut lawmaker further urges that we call on other countries of the free world to join in this boycott.

Dodd also believes the free world must make preparations to receive and resettle any refugees who now escaped from Czechoslovakia in the wake of Soviet occupation. Beyond this, he thinks we should move immediately in the United Nations to appoint a special committee, whose representatives would be empowered to go into Soviet occupied Czechoslovakia and make an on-the-spot report.

Yet the administration refuses to take any such vigorous action on the amazing grounds that to do so would worsen U.S. - Soviet relations. The Czech crisis, it would seem, should have exploded for the umpteenth time, the myth that Moscow has somehow evolved into a peace-loving country.

It should have exposed the Warsaw Pact powers as a gang of aggressors. It should have proved, once and for all, that you won't get much from Moscow by appeasing it or building bridges to it. Indeed, all you get is a steel boot in the face. This Administration, however, never, never seems to learn.

But this year, fortunately, the American voters have a chance to show at the polls that they at least understand what must be done, even if their present leaders don’t.

Many know Tim Pool from his successful, news-making podcast but many don’t know he’s also on the fron...

'Children are being trafficked, exploited, raped, and the government knows about it.'...

The Case For Kevin McCarthy– And For His Adversaries

How much GOP blood will be spilled, and can a resolution be reached?...